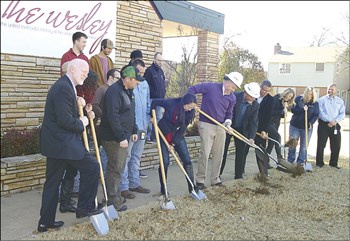 Officials, board members, and students take part in a groundbreaking Jan. 8 at the Wesley Foundation for the University of Oklahoma. Expansion and renovation work got under way the next day. Campus minister Daniel Dennison, center, in purple and hardhat, dumps the dirt from his shovel, as missionary Fuxia Wang, beside him at left, digs into the earth. She leads the OU Chinese Fellowship that meets at the center.
BY CHRIS SCHUTZ
NORMAN, Okla. — Shovels hit the ground Jan. 8 for a symbolic start to a multiphase improvement project for the Wesley Foundation at the University of Oklahoma.
The capital campaign exceeded its goal of $500,000 by the end of 2017 — instead, the total was $702,000, said campus minister Daniel Dennison.
“We feel very encouraged,” Rev. Dennison said. “It’s only once in a generation that we would ask for that kind of giving.”
The foundation is grateful that gifts have exceeded the original goal, in case of possible cost overruns, he said.
Dennison, missionaries assigned to The Wesley, board members, donors, and students participated in the groundbreaking on the north side of the facility at West Lindsey Street and Elm Avenue.
The fundraising success means the Wesley will get “substantial updates,” Dennison said.
The first phase of the project will give an attractive new look to the front of the building, with patio seating and a pergola over the walkway. The new entry is meant to be inviting, beckoning to students walking or cycling past the building.
That phase has begun, with the work occurring during the day. There is noise, but “it’s manageable,” Dennison said. Most of The Wesley’s programming is in the evenings.
The next phase, set to begin in April, will feature a new international office suite, roof, and updates to the east side of the building. Also during that phase is remodeling of “The Pit,” the central commons area in the building. The work will include removing a dropped ceiling and replacing lighting, Dennison said.
A third phase, expected to begin in May 2019, will bring construction of a new office suite on the north side of the building to help accommodate The Wesley’s growing intern program, Dennison said.
It is important for the building to remain usable during the work, he said.
At the end, “it will look a lot nicer and not like it’s 60 years old.”
Present for the groundbreaking was James Parker, a donor and board member who was active at The Wesley when he was an OU student. He graduated in 1993. “It will be a wonderful addition for the students,” Parker said. The aesthetic improvements will “match the worship experience.”
Skyler Rodriguez, a senior majoring in communications, said he believes the changes will help recruit new students to The Wesley. Jake Pannell, a junior mechanical engineering major, agreed.
Jack Bode, a senior linguistics major, said he is pleased the international ministry will get a bigger office. “I like them a lot,” he said.
To contribute to the United Methodist campus ministry at OU, go to: www.okwesley.org/building-the-future.