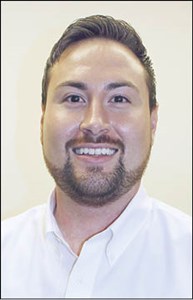 Nathan Skinner
LAWTON, Okla. — New Lawton resident Nathan Skinner needed to find work. Pursuing temporary assignments, he learned of one with long-term potential. Between job interviews, he stopped and asked God for guidance.
“Whichever one, I hope you are there with me every step of the way to help me grow and flourish and be everything you want me to become.”
On a Monday, Skinner started a temporary administrative job in the middle of charge conference season for churches of the Wichitas District. He attended his first such conference the following Sunday, assisting District Superintendent Connie Gibson.
On Nov. 1, his job status changed to permanent.
Welcome District Administrator Skinner, one of eight DAs who serve in the Oklahoma Conference.
“I was hoping and praying that I would find something like this, and they were hoping and praying that they would find someone like me!”
Skinner’s skill set includes six years as administrative assistant for an oil well company.
Shortly after finding the district job he also found a church home, at Lawton-Centenary United Methodist.
Skinner said his parents were 16 when he was born. His grandparents raised him, and he graduated from Chickasha High School.
He recalled with sadness a story told at his grandmother’s funeral, that she’d regretted not taking Skinner and his brother to church often.
“The reason that I know who God is … is my grandmother. She’s such an important, important person in my life.”
After both grandparents died in 2012, Skinner said he experienced “a dark time.” Yet when he felt friendless, God was his friend.
“He was there every step of the way. He sought me, and I am so thankful for Him. He still carries me. To be where I am in my life and to do the things I am able to do every day is extremely humbling.”
He continued, “I’ve always had a love for people and a love for God, and to have them both in the same aspect of my job is amazing.”
The United Methodist connection also amazes Skinner.
“I didn’t realize in the grand scheme of things that I would have 50 pastors or 65 churches. The level of care they have for me and what we do as a whole, impressive. You step back and get to see the picture gets bigger and bigger every week.”
Thanks to Grandma, he’s in that picture, too.
(Wichitas District Office: 580-248-3343, wichitasdistrict@okumc.org)
Making Disciples of Jesus Christ for the Transformation of the World