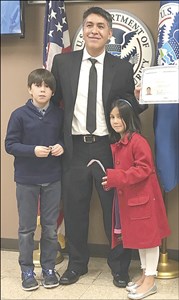 At the Homeland Security Office in Oklahoma City, Miguel and Lali join their dad, Carlos Ramirez, for a special occasion photo. PHOTO BY LINDA HARKER
BY CARLOS RAMIREZ Leadership and Innovation, the Oklahoma Conference

In January, I became a U.S. citizen. I have been asked to write about my experiences as I went through that process.

In this brief telling, I won’t address the complexities, the bad and the ugly, of my story as an immigrant in the United States.

Because we live in an evermore polarized society, I want to emphasize the parts of my story that are full of love and hope. I believe there still is a place to come together, regardless of political or theological perspectives, to be witnesses to the love of Jesus Christ and to celebrate the highest ideals this country was founded upon.

My journey began in 2004. I am a native of Mexico. Twice that year, I applied through the U.S. Embassy in Mexico City to travel to the United States, to visit my fiancee, Wendi Neal of Oklahoma, and to explore enrolling in Perkins School of Theology at Dallas. Both times, I was denied.

At the time, my income was a modest stipend to help with my expenses as a Methodist clergyman serving two rural churches in the Mexican state of Puebla. I did not have any property in my name — no car, house, or bank account — that deemed me worthy of entering the USA.

The failed attempts led to an application for a fiance visa. As a U.S. citizen, Wendi could seek that type of visa, for a foreign spouse or fiance.

That succeeded, and I entered the USA on Oct. 25, 2004. The limited fiance visa required that Wendi and I get married within three months. Officiating at our wedding was Linda Harker, who is now senior pastor of Norman-McFarlin United Methodist Church.

Next step was to file for a Green Card, permitting me to live and work in this country for two years.

Those years were marked by my first U.S. encounters with people who received me with arms wide open, beginning with the Harker and Neal families. And I was appointed to pastor Heavener Hispanic Fellowship and Howe United Methodist Churches.

My work at Heavener impacted me profoundly. I heard many stories from fellow Spanish-speaking immigrants — of experiences good, bad, and ugly — that deepened my understanding of God and of ministry.

Howe UMC, my first cross-cultural appointment, was a joy. The people of that little country church were patient with me as I learned how to preach in English, how to minister in a majority white culture, how to sing in English the songs I had first learned in Spanish, and to sing new songs.

But also in that part of Oklahoma, known as “Little Dixie,” I experienced difficult situations: prejudice, discrimination, and racism.

With thanks to God, relationships grew between me and my congregants as well as between the Spanish-speaking fellowship and the English-speaking Howe and Heavener churches. We reached a point that the congregations identified themselves as “sister churches.”

Then Wendi and I, a clergy couple, were appointed as associate pastors at Elk City UMC, relocating from far eastern Oklahoma to far west. Soon after our arrival, Senior Pastor Dan Peil and the leadership of that church entrusted us to launch a worship service with modern/contemporary flavor, called “New Day.”

While in Elk City, I received my permanent U.S. residency card, effective for 10 years, but I gained much more: the support of a congregation that allowed me to be myself, with all my grammatical mistakes and cultural idiosyncrasies, and also taught me many things.

Elk City fully embraced our multi-ethnic family, being present for the birth of our two children, our clergy ordinations, and my graduation from Phillips Theological Seminary.

In 2012, Wendi and I moved to the greater Oklahoma City area. My appointment was to the Oklahoma Conference staff.

Last year I decided to apply to become a U.S. citizen.

My children are U.S. citizens. I am a clergy elder in the Conference. I have lived one-third of my life in this country.

It was time to formalize my relationship with the USA.

For me, the last step in the U.S. citizenship process took about eight months. (Over the years, cost of all the process for me totaled about $8,000.) Finally I learned that I had qualified to take the oath at the Homeland Security Office on a specific date.

As I entered, I learned family had to wait separately. There were more instructions for those of us in the ceremony that day.

But we were allowed to keep our cellphones. Wendi sent me a text as I was going through that final paperwork.

Her text: “Look behind you.”

I turned and saw so many familiar faces. Over 20 people had come — from Elk City and OKC-Village churches, the Conference office, and more.

I was amazed all those people had come. I saw in their faces how much they care for me and how proud they are of their country — now mine, too.

Over cake and ice cream at the weekly community meal later that day at OKC-Village, where I pastor part-time, people described their excitement for me. The next day my co-worker Rebekah Hasty hosted a reception at the United Methodist Ministry Center.

Throughout my 13 years in the United States, God’s presence has been constant and shown to me through the wide-open welcome and love of many Oklahoma United Methodists.

I can but give thanks to God. In this Lenten season, as we reflect in our humanity and in our darkness, I pray that my story reminds you of the beauty of building bridges instead of building walls.