Watching and waiting: Experiencing General Conference from the sidelines

Delegates and observers from Oklahoma pose for a group photo during a brief recess on Feb. 26., the final day of General Conference. Photo by Meagan Ewton.
By Meagan Ewton


Dozens of Oklahomans, both clergy and lay, journeyed to St. Louis to observe the Special Session of General Conference, held on Feb. 23-26. Though personal viewpoints on the conference differed, a single motivation remained common: a chance to witness history.

Being present in person

Susan Whitley, pastor at Skiatook, said St. Louis was a close enough drive that she felt compelled to attend.

“I knew whatever happened here would be historic in one way or another, and I wanted to be here,” Whitley said. “I know I could’ve watched it livestream, but I felt that it was important for my folks back in my church that I could explain the emotion behind a lot of this and just how complicated it is.”

Jeff Jaynes, executive director of Restore Hope in Tulsa and a jurisdictional delegate for Oklahoma, said he wanted to be present for an important moment in the church. One thing he kept in mind was his ministry’s continuing obligation to serve people in need and to provide hope.

“There will be challenges for Restore Hope if there are large churches that leave to be a part of a new denomination or leave our connection,” Jaynes said. “That need for hope doesn’t change on Thursday. It doesn’t change next year. It won’t change after the next General Conference. People need hope.” 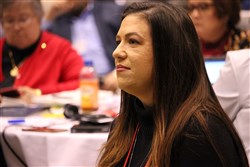 Kate Scraper, director of benefits and personnel for the Oklahoma Conference, volunteered and trained to be a page on the delegate floor. She described her role as an honor and an eye-opening experience.

“Being there in person, behind the scenes, watching not only how everything is accomplished, but how many volunteers and how many hours goes into it, gives me a new appreciation for the undertaking that General Conference is,” Scraper said. “Being connected to the body, even when the body is hurting and fracturing, gave me a sense that God is not done with us yet.”

Jaynes said it’s natural for all United Methodists to hurt for what is happening in the church and the world, and his continued prayer is for all to have hope.

“We are not a people without hope,” Jaynes said. “We are an Easter people; we are a people of resurrection.”

Whitley said the outcome of General Conference would not affect the mission or work of her congregation.

“We are still gonna be Skiatook FUMC, we are still gonna do God’s work in Skiatook and around the world, and God is still God, and God’s church is gonna endure no matter what,” Whitley said. “That’s the message I’ve been trying to give all along. We’re just gonna remain faithful because we believe God is faithful.” 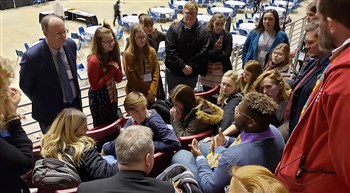 Students from OCU speak with Bishop Nunn after the One Church Plan was voted down in legislative committee on Feb. 25. Photo by Meagan Ewton.

A group of students from Oklahoma City University were also on hand to witness General Conference in person. They sat with some ministry leaders from Oklahoma, and several people wore rainbow stoles in show of LGBTQIA support.

Laley Braucher, a religious education senior, said it was important to see the thoughtful consideration that went into General Conference. Madison Day, a youth ministry freshman, said it’s important to have observers because delegates need to see who will be directly impacted by their votes. Peyton Wagner, a youth ministry major, said she thought being present in the atmosphere was more powerful than watching the proceedings on livestream.

“As young people, we stare at screens almost all day, every day, but being here and being around all the people, it just makes so much more of an impact,” Wagner said.

“One day this church will be passed on to me and my peers here with me, and we will be the future of the church,” Williams said. “Just being able to be here and see how it works and the decisions going forward, it’s important for all us young people who are going to assume leadership of the church.”

General Conference delegates voted down the One Church Plan during the legislative session on Feb. 25. Several students were visibly filled with emotion during the worship session that followed. Immediately after worship ended, Bishop Nunn and several Oklahoma delegates and ministry leaders joined the students in the stands. Nunn listened to the students as they shared personal stories and concerns related to the Traditional Plan.

“I think it’s critical to listen,” Bishop Nunn said. “I hope that I was able to provide a word of hope that our help is in the Lord who made heaven and earth, that God so loved the world that he gave his only son, that all people are of sacred worth; I think that’s the foundation of Methodism today.”

Addison Saviers, a religion major and children’s ministry director for OKC-Mosaic, said she appreciated that the delegates and bishop took time from their schedules to be in community with them.

“General conference was a difficult time for lots of different reasons and I know that they did not have to meet with us, but chose to, which I greatly appreciate,” Saviers said.

Williams said it was great to see support from Oklahoma conference leaders. He felt they heard the concerns and hurt that were shared, and he was thankful.

KC Curry, an OCU student who attends Edmond-First, said it meant the world that the bishop and delegates came to speak with them because it’s a chance not a lot of young people are given. She was also glad the bishop reminded them that Oklahoma needs lay delegates and hopes others who feel called to get involved will apply.

“Before going to this special called General Conference I was giving little thought to applying to be a lay delegate for 2020,” Curry said. “After witnessing this year’s [General Conference] and seeing the little amount of young people, I submitted my name as soon as we got back to Oklahoma.”

The week after General Conference, Jacob Harrell, a youth ministry major, said though he felt hurt, confused and conflicted at first, he now feels more excited than ever to be a United Methodist.

“I love our church and our tradition and I want to be a part of this body of people and help shape what Methodism looks like in the future,” Harrell said. “I am aware our conference is not of one mind, but I also feel like we love each other and will continue to lift up one another… If you feel called to be a part of the bigger picture, it is worth your time to come witness the body of the church at work.”

Jenny Johnson, a religious education major and children’s coordinator at OKC-Village, also felt defeated after General Conference and hopeful the week after. She said Bishop Nunn’s comments about lay delegates inspired her to explore being a lay delegate in Central Texas, her home conference.

“Many people spoke from the floor voicing their concerns about the disappearance of the young people,” Johnson said. “The numbers of young people are decreasing, yes, but those of us who are here are about to get much louder.”

Rev. Kathy Brown, who serves Tulsa-St. Paul’s, said she wanted to attend because the future of the church was at stake, and she wanted to experience what would happen in person. She said people who watched from home would not have seen the large number of people wearing rainbow stoles or showing support for the LGBTQIA community. After General Conference ended, Brown shared her thoughts publicly on Facebook.

“Today I feel the pain and sorrow and the outrage, but I am confident that there will be many who say, ‘we are not done yet,’” Brown wrote. “I have no idea what that will look like, but I give thanks for the voice of justice that will continue to work. Right now, we are in the midst of sorrow, but the resurrection will come!”

Scott Spencer, pastor at OKC-Mosaic, recognizes that reconciling churches like his hoped for and expected a better outcome. He said votes at General Conference do not change the fact that all people, including those in the LGBTQIA community, are made in the image of God and loved by God.

“I’ve had people who said they can’t stay in a denomination that would pass that plan, but I’ve been telling them, let’s not make hasty decisions, let’s talk about what happens when we get back home,” Spencer said after the One Church Plan was voted down on Feb. 25. “I think this is a very crucial time for our denomination, and we should be respectful of each other and pray for each other. This is a very hurtful time, and certainly LGBTQIA people are hurting.” 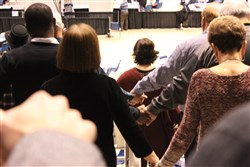 Observers from Oklahoma hold hands at General Conference before the final vote on the Traditional Plan on Feb. 26. Photo by Tabitha Beckman.
Making Disciples of Jesus Christ for the Transformation of the World