Ventriloquist prepares for next big stage 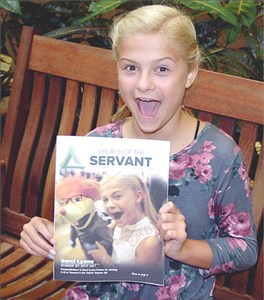 BY CHRIS SCHUTZ
Ventriloquist Darci Lynne Farmer credits God for blessing her with the talent that won her $1 million on the television show “America’s Got Talent.”
The 13-year-old and her family are still adjusting to the changes that have resulted from her first-place finish on the show. They are members of OKC-Church of the Servant.
Darci’s parents are Clarke and Misty Farmer, and she has three brothers, Nick, Dalton, and Nate.
Mom Misty said she has advised her daughter to “trust that God’s going to take care of you.”
Darci said she plans to give some of her prize money to the church for mission work. OKC-Servant is “a big family, so supportive. I got everybody here to vote for me.”
The Sept. 20 win came with the chance to perform in four shows at Planet Hollywood in Las Vegas on Nov. 2-5.
Darci said she is “super excited” about the shows.
The original plan was for her to perform twice, but demand for tickets was so great that the producers added two shows, Misty said. There had been no word from producers of any schedule change after the mass shooting Oct. 1 in that city, she said.
Darci, her mother, and the producers
see ventriloquist, page 8
have not yet decided which of Darci’s six puppets will appear in the shows and what songs to use.
The most well-known of the puppets are Petunia, a pink bunny; Oscar, a mouse; and Edna, a senior citizen who sang passionately to judge Simon Cowell in an episode of “America’s Got Talent.”
Darci also has Katie, a cowgirl she designed; and Okie (a duck) and Nigel (a bird), both gifts.
It was Darci’s idea to try out for “AGT.” The process involved making an audition video and submitting it. Then show producers said they wanted to see her audition in person in Austin, Texas, last year.
Misty estimated there were thousands of performers who took their acts to Austin in hopes of getting on the TV competition.
After that audition, producers called in December. They wanted Darci to perform on the first taped show, in Pasadena, Calif.
The young ventriloquist picked the song “Summertime,” from the opera “Porgy and Bess,” because she had heard her mother sing it at home. She and Petunia partnered on stage to present it. 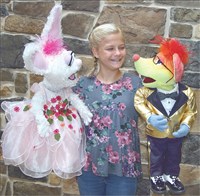 As Darci advanced in the “AGT” voting rounds this summer, she had help from music directors in picking other songs she and her puppets performed, such as “Natural Woman” and “With a Little Help From My Friends,” her mother said.
Even though some of the songs were not familiar to her daughter, “she learned them all very quickly,” Misty said. As part of OKC-Servant’s worship leadership team, Misty assists when the congregation sings hymns.
Darci said the process of performing was fun and she enjoyed getting compliments from the judges, but waiting on stage for the voting results was difficult.
Darci and her parents have been getting a lot of requests for her to perform — “so many that she can’t do them all,” Misty said. They are seeking to work with an agent and manager for her.
Chuck Weatherford, who is director of music ministries at OKC-Servant, quipped that Darci is “the most famous Methodist I know.”
The good publicity from her win “is good for the Methodist church,” he said.
Mother and daughter sing together at the church on Mother’s Day. Weatherford said, “They always bring the house down.”
Making Disciples of Jesus Christ for the Transformation of the World