Until the work is finished 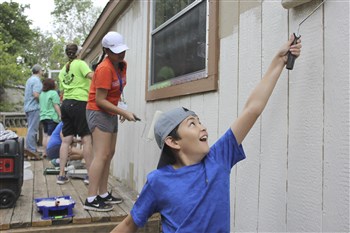 Adrian Holmes, a seventh grade student from Moore, helps fellow Youth Force participants paint the exterior of a house that was flooded in 2015. The house was one of only 20 projects remaining in the Oklahoma Conference’s “Let’s Finish This” initiative.
By Meagan Ewton

Adrian Holmes had only helped paint his little sister’s room before, but that wasn’t going to stop him from doing his best to paint a house.

Holmes, a seventh-grade student from Moore, was eager to volunteer with Youth Force, a missional event for teens sponsored by the Oklahoma United Methodist Conference.

“At Youth Force you do something that actually helps people, not just sleep and sit around,” he said. “That helps no one.”

That drive to help others was shared by nearly two dozen Youth Force and AmeriCorps volunteers as they refurbished a southeast Oklahoma City home three years after massive floods. By the end of the day, Holmes would help the Oklahoma Conference get one step closer to ending its “Let’s Finish This!” campaign. 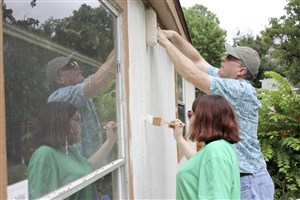 In 2015, flooding across the state left 756 families with water damage to their homes. By fall 2017, 147 homes still needed major repairs.

In January, Bishop James Nunn called on Oklahoma Methodists to complete the remaining projects by the end of July 2018, saying, “we’re gonna finish this.” Just five months later, only 20 projects remained, including the home in southeast Oklahoma City.

Bishop Nunn, who joined Holmes and the Youth Force team to help paint the house, praised the volunteers for their work on the home.

“The crew’s just done an outstanding job, remaking this house and putting a new roof on, making repairs inside and out,” he said. “I can’t imagine the hopelessness that the folks must have faced knowing day after day the only thing you’ve got to protect your property is a bucket.”

The work on site was led by Kevin Walker, a disaster project manager with United Methodist Disaster Response Oklahoma. He said the denomination’s recovery efforts help save homes that would otherwise crumble from the damage.

“This ministry is very important in this state because lots of organizations focus on the immediate response during a disaster; few focus on recovery,” Walker said.

Under his direction, volunteer crews had put up new siding, replaced the roof, and replaced the sheet rock inside the home. Walker said structural work often provides homeowners with mental relief from stress and anxiety.

“A new roof is really new hope; it lets people focus on other stuff,” he said. “To step foot in a house, build a relationship with the homeowner, to see the house at the end and to see the people so happy — that means more than anything.”

The most crucial aspect of disaster recovery in Oklahoma is that it’s not about if, but when recovery will be necessary, according to Walker.

“In some aspects, we’re their last hope,” he said. “Having this ministry helps people get back to their lives and return to a new normal.”

“Take a small step wherever you are,” the bishop said. “It may be in your hometown, it may be across the state. If you’re just beginning, start local, but do something that makes an identifiable difference for somebody who otherwise wouldn’t have opportunity to get the service done.”

For young Adrian Holmes, that first step was deciding to volunteer with Youth Force instead of spend his summer on the couch. Raising his paint roller to reach above his head, he grinned at the sound of paint clinging to the new siding and declared, “it’s the best noise I’ve ever heard.”