Mark Jardine preached at baccalaureate, and his daughter Laura gave the invocation at commencement.
During two ceremonies on May 5, Oklahoma City University conferred 543 undergraduate and 362 graduate degrees in its 113th annual commencement exercises.

OCU President-Designate Martha Burger, speaking in the undergraduate ceremony, encouraged students to discover the possibilities and rewards that can be found outside one’s comfort zone. Outstanding Faculty Member of the Year Lisa Wolfe spoke in the graduate ceremony. She urged students to find new and creative ways to tell their stories. 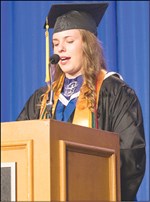 Among them was the father-daughter duo of Mark Jardine, senior pastor of OKC-Chapel Hill, and Laura Jardine of the Class of 2018.

Rev. Jardine, the baccalaureate speaker, is an OCU alumnus (Class of 1984). He enrolled after hearing a sermon by Jerald Walker, who at that time was OCU president and one Sunday was guest preacher at Mark’s home church of Bartlesville-First.

“When I left church that morning, I knew I was being called to be at OCU,” recalled Mark. “I phoned OCU the next morning and asked for Dr. Walker and was connected directly to him. I started that next semester. It was a God thing.”

Thirty years later, oldest child Laura followed in her father’s footsteps. She began classes in Fall 2014 as a biology major. Laura gave the invocation in the undergraduate service.

“A liberal arts curriculum was very important in my college search. I planned on going into science, but I knew that I didn’t want to give up on improving my writing and critical thinking skills.”

She continued, “I was also attracted by the size of OCU. The biology department is the largest in the College of Arts and Sciences, but as an upperclassman I never had a major class with more than 15 people.”

Since graduation, she has begun working with the School of Forestry and Environmental Studies at Yale University as a research assistant, based in southeast Wyoming.

“As Laura was introduced to give the invocation, it was a powerful reminder of just how blessed we have been by her education and development as a scholar at Oklahoma City University,” said her father.

Laura is the family’s third OCU graduate. Her mother, Elizabeth, graduated in 1993 with an M.B.A.

Other United Methodist students leading in the ceremonies included Ben Patterson of OKC-St. Luke’s, who read scripture at baccalaureate. In the undergraduate service, the student address was by Monica Hiller, daughter of Cross Point Camp Director Jeff Hiller, and benediction was by OKC-Quail Springs member Melaina Riley. Taylor Barnett, daughter of the late Rev. Mark Barnett and granddaughter of the late Rev. Marcus Barnett, gave the graduate benediction.