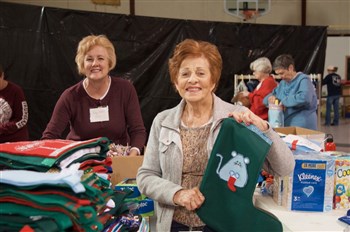 Helen Duckett holds up a stocking as Mary Rachel Bailey goes through a box of candy. The women participated with the UMW in the annual Tool Tyme event at Cookson Hills Center. Photo by Tabitha Beckman.
By Tabitha Beckman

United Methodist Women from around the state gathered at the Cookson Hills Center in Cookson for the annual Tool Tyme mission event held Nov. 8-10. The weekend included a silent auction, and all proceeds went back to Cookson Hills mission work.

Members set up the Christmas store in the gym, raked leaves, organized thrift store donations, cleaned out a building for a new food pantry, made jam, prepared turkeys and helped with other odd jobs. Women who couldn’t do much physical work sat and wrote out encouragement cards to include in snack bags that go out to local school children. Several members attended churches in the area before leaving after the weekend was over.

Rev. Judy Deere, the new director of Cookson Hills, was very excited about all the Tool Tyme helpers. She said she likes to step aside and let volunteers take charge of a project, noting the strength of laity in Methodist churches.

“I am overwhelmed by the generosity of those that are here today for people they won’t meet, for you to come and without hesitation, to respond to that call,” Deere said. “To me, that’s overwhelming. That’s a God moment.”

Tool Tyme has been going on for more than 15 years, and a few of the UMW members have been coming for all 15 years. Cindy Hall has missed very few Tool Tyme’s over the years. She loves helping Cookson Hills get ready for Christmas.

Annie Cornelius has been coming for the last five years. She loves cooking turkeys and prepping Thanksgiving bags.

“You know that as you’re putting it in that somebody’s going to make a wonderful Thanksgiving meal for their family,” Cornelius said. “They wouldn’t have it if we were not up here, loading those bags.”

“I come here because this is the place where I can see the hands and feet of Jesus really working,” said Harri Williamson. “Everybody does something, and the joy of it is I get to see my grandsons here as they’re giving back to the community.”

Gilpin pointed out some of the recent issues in the Lake Tenkiller area, including a tornado last fall and floods during the spring.

“It’s been a really tough year in this area, so there’s going to be more people in need this year,” Gilpin said.

Brenda Clear, one of the weekend’s participants, was fairly new to UMW, but she was not new to the work of Cookson Hills. She used to drive by the mission when she lived near Tenkiller before she was involved in the work of the church.

“I love the fellowship, and this is sacred ground to me.” Clear said. “I’ve kind of seen it grow up over the years… I like being a part of it.”

Cookson Hills serves people in Adair, Cherokee and Sequoia counties. The Cookson Hills Center has been a very significant part of the mission work of the United Methodist Women in Oklahoma since 1948.