Each year, Oklahoma City University presents the Bishop’s Scholar Award to a select number of outstanding incoming freshmen who have expressed a desire to pursue a calling to United Methodist ministry through OCU’s Wimberly School of Religion.

This full-tuition scholarship provides for both academic study and opportunities for leadership in chapel worship and campus ministry.

Two recipients were chosen from this year’s applicants. 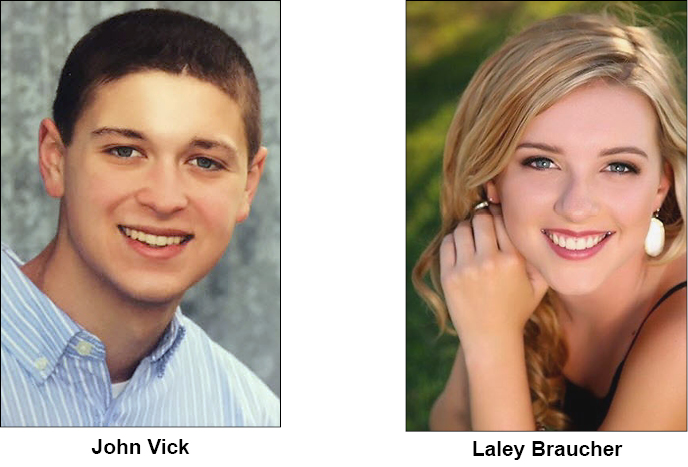 After receiving his call to ministry in the eighth grade, John Vick of Inola has followed that calling through his teenage years, taking every opportunity given to him to preach on Sundays.

By February, John already had 21 sermons under his belt and had been a semi-finalist in the NextGen Preacher Search, a nationwide preaching competition.

Over the last five years, John has served in youth leadership positions in his home church, Inola UMC; his district; and at school through the Fellowship of Christian Athletes.

Others clearly recognize his gifts and calling; he has been invited to speak and pray at community venues. He gave the opening prayer for the 2015 Inola High School graduation ceremony, led the student worship service See You At the Pole, and was the featured speaker at the 2016 Baccalaureate Service for his graduating class.

John is pursuing his calling to pulpit ministry in The United Methodist Church as a Religion major.

Before accepting her call to ministry last summer, while attending the Oklahoma Conference’s youth leadership camp (CYME), Laley Braucher of Claremore had spent most of her youth in service to the Lord.

During high school, Laley was an active leader in her home church, Claremore-First UMC, and also at the district and annual conference levels.

She has helped lead music each Sunday in worship, at CYME, and for the Laity Session at Annual Conference. She has served as a statewide youth chaplain, led local missions, and finished out her senior year as a youth ministry intern in her church.

However, she had struggled to determine God’s direction for her life and the career she should pursue through college studies.

Laley said it was in a prayer that God gave her the answer.

"It was like an epiphany slapped me across the face. In my prayer journal I had written: ‘This life isn’t about me, it’s about you. That’s why it is so hard for me to pick a career, because I don’t really want to do anything that leaves you out of the picture.’"

As she continues the work of discernment in her calling, Laley said, she knows God wants her to "care for people, love people, pray for people, help people, and use my voice to praise him."