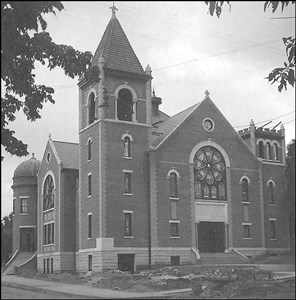 An archival photo of OKC-First Church, circa 1904.

Tulsa’s Boston Avenue United Methodist Church, which has been called “a sermon in stone,” and OKC-First United Methodist, which was dedicated before statehood, have joined four other Oklahoma locations as official United Methodist Historic Sites.
Bishop Jimmy Nunn was notified recently that the General Commission on Archives & History has approved adding the two churches to the register of Historic Sites of The United Methodist Church.
OKC-First is No. 531 on the list of sites, while Boston Avenue is No. 532, according to the commission. Each will receive a plaque to be posted at the church.
This outstanding recognition comes after related resolutions were approved by 2017 Oklahoma Annual Conference delegates in late May.
Located downtown, OKC-First truly was the first church built in Oklahoma City, said Bill Mullins, the church’s historian and a member since 1960. It initially was a wood frame structure built in 1889. That later was sold to another congregation and relocated.
Mullins, who submitted First UMC’s application for the designation, said he is thrilled the church has been added to the denomination’s official records. “I worked quite hard on getting that information out,” he said.
Lesly Broadbent, the new pastor, said the congregation is “certainly excited about that and honored to have that privilege.”
He said the church plans to install the plaque on the outside of the building near a historic stained-glass window that bears the image of Abraham Lincoln.
Mullins expects the installation will take place in October, soon after the 128th anniversary of the church’s dedication.
As part of the application process, Mullins submitted copies of deeds tracking the property acquired over the years. Today the church covers about three-quarters of a city block. The cornerstone for the current site was laid in 1904.
The most recent property addition occurred in 1973, according to the documents.
First UMC sits across the street from the Oklahoma City National Memorial. The congregation was displaced for three years after the 1995 bombing of the Murrah Federal Building, which also badly damaged the church.
On the Sunday after the bombing, the congregation met in the fine arts building at United Methodist-related Oklahoma City University. Then Trinity Baptist Church, near downtown, granted use of some of its space during the years of First’s rebuilding process, Mullins said. 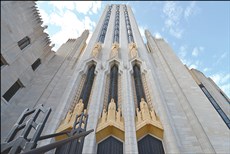 Boston Avenue, also a downtown church, is the “third most-visited tourist destination in Tulsa,” said David Wiggs, senior pastor of the church.
The church, which is recognized for its ecclesiastical Art Deco style, also has been designated as a National Historic Landmark by the U.S. Department of the Interior. People from across the country and around the world come to see it almost every day, Rev. Wiggs said.
Guided tours are offered every Sunday; self-guided tours are available whenever the building is open.
The goal for the church building, which was completed in 1929, was that “it would be a beacon of light that would draw people to the church and into the family of Christ,” Wiggs said.
He is “glad to work and serve and worship in such a magnificent building.”
The facility also is notable because it was designed by a woman in the 1920s, a decade “during which women were struggling for the right to vote,” according to materials from the church. Adah M. Robinson designed the church at the suggestion of Mrs. C.C. Cole, the wife of the church’s building committee chairperson at the time.
Previously, Robinson had established an art department at Tulsa’s Central High School. She started the University of Tulsa’s art department in 1928; in 1945 she joined the faculty of Trinity University, San Antonio, Texas.
During the design process, architects said they would consult with Robinson on “all matters artistic,” according to historic documents submitted with Boston Avenue’s application for historic status.
To apply for designation as a United Methodist Historic Site:
Contact Brian Bakeman (bbakeman@scjumc.org), who chairs the Oklahoma Conference Commission on Archives & History, or Conference archivist Christina Wolf, (cwolf@okcu.edu) to request an application for your church and to notify the Commission.
Complete the application (includes statement about historical significance of the site or congregation, supporting documents, information about current ownership, and plans for celebration of the site and outreach). Commission members will make a site visit and assist with the application.
Get approval of the Commission, which then prepares a resolution to present to delegates at the next Annual Conference.
If that resolution is approved, then the materials are forwarded to the General Commission on Archives & History for registration.