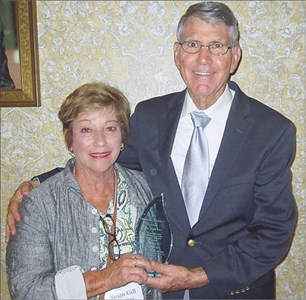 Susan and Jerry Gill display the Distinguished Service Award that Jerry received from the ­General Commission on Archives & History.
BY CHRIS SCHUTZ
STILLWATER — A longtime historian who has given years of outstanding service on the Oklahoma Conference Commission on Archives & History now holds the Distinguished Service Award from The United Methodist Church’s counterpart.
Conference archivist Christina Wolf said she nominated Jerry Gill of Stillwater for the denomination-level award “since he had done so much as Chair of the Commission on Archives & History to champion United Methodist history in Oklahoma.”
Dr. Gill, who chaired the Oklahoma commission from 2012 to 2016, received the award Sept. 16 at Drew University in Madison, N.J. Also in attendance were his wife, Susan; Elizabeth Anthony, a commission member; and Wolf.
Gill is retired after a long career as a history professor at Oklahoma State University and as the university’s alumni director. He is a member of Stillwater-First UMC.
He called the award “great recognition for our Conference and what we’re doing.”
Being chosen for the honor is “certainly humbling,” he said, and he accepted it on behalf of all who have been involved in tracking the Church’s history in Oklahoma.
“It’s like a team sport,” he said.
Gill has worked to secure official recognition of more United Methodist Historic Sites in Oklahoma. In 2014, Stillwater-First UMC was designated Historic Site No. 489.
He also had a crucial role in the Oklahoma Archives & History commission’s creation of the documentary film “Who Is My Neighbor? Native American Methodism in Oklahoma.” The documentary was unveiled at the 2016 Annual Conference, and free DVD copies were offered to churches and small groups in both the Oklahoma and the Oklahoma Indian Missionary Conferences.
Among Gill’s other achievements through his commission service:
Making Disciples of Jesus Christ for the Transformation of the World