The Roxy Theater in downtown Muskogee plays new parts these days — and one is as a church that especially welcomes the people who shelter at the nearby Gospel Rescue Mission.

They are invited to attend a contemporary worship service, called SPIN, on Sunday evenings at the venue that opened in 1948, said Jinx Barber, who is an associate pastor for Muskogee-St. Paul United Methodist Church.

St. Paul UMC first held a service in the Roxy on a Sunday in June 2016 after an electrical fire on the church’s main campus disrupted the usual schedule for the congregation in west Muskogee.

After activities resumed at the main location, church leaders asked Roxy representatives: Can you cut us a deal on renting the space for an evening service?

For St. Paul, "every couple of months we look at who we are reaching, who we want to reach," Rev. Barber said. The church has identified a large, underserved, homeless population in Muskogee.

The idea is to create "a presence in downtown that is not a church building," he said, but rather "a safe space where they can come and worship and not feel that they have to dress up."

People who are homeless "don’t feel comfortable in a traditional church setting."

Rev. Burris agreed that those who attend SPIN aren’t in worship at St. Paul on Sunday mornings. The church has been hoping to grow interest in the Roxy services, which began in October, but recent attendance hovers between 10 to 25 people, he said.

"The numbers have not been what we’d like them to be."

Leaders are considering how to develop a band and music leadership for SPIN. Another idea is the dinner church concept.

Burris said, "We are trying to figure out ways to minister to people around us."

Barber, also a student at Phillips Theological Seminary in Tulsa, is on track to be commissioned as a provisional elder at the 2017 Oklahoma Annual Conference. As part of that process, he was required to submit a video of a sermon he preached.

He chose to record one of his sermons at the Roxy, when he preached to a congregation of 52 people from the shelter.

"It was rowdy, but it was one of the most authentic experiences of church," he said.

Closed for over 30 years, the Roxy reopened in 2001 as a multipurpose entertainment venue, according to information online. 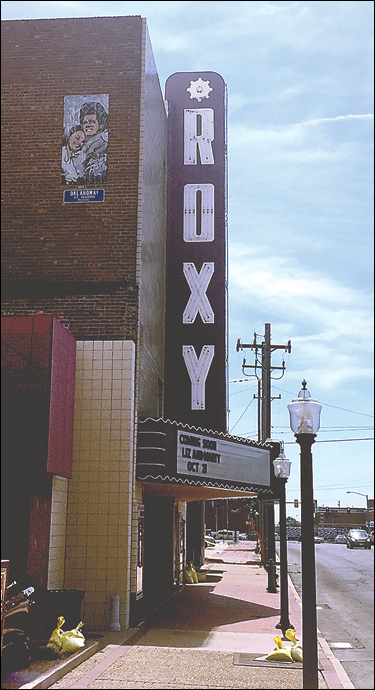