Why Rev. Dylan Ward considers his response to a racist message on Instagram "the bare minimum."

Rev. Dylan Ward thinks it’s ironic to think that people are asking him, a “29-year-old white guy,” about his experience responding to racist vitriol. On Aug. 2, the Inola United Methodist Church pastor woke up to a message on the church’s Instagram account that began, “Jesus hates n------.”

“I got notified because, like most small churches, I’m the primary social media director,” he said. “I opened the messages, and I was like, ‘oh no, that’s not okay.’”

Ward believes the message was sent in response to a sermon he preached after the death of George Floyd, a black man who died when ex-officer Derek Chauvin kept his knee against Floyd’s neck for almost eight minutes during an arrest. Ward spoke about the importance of saying “Black Lives Matter” and the need to be anti-racist, an attitude which works actively against racism in both individual and societal ways.

After sharing a screenshot of the message with two leaders in the church, he edited out the swears and the slurs to share the image on his Facebook page.

“Sometimes people say racism isn’t a problem, or that race shouldn’t be talked about in churches,” his post read. “And then you get a message like this sent to your church’s Instagram. This is why we say it’s not enough to be not racist, we must continue to work to be anti-racist.”

Since posting about the message, Ward said he’s received encouragement from friends, colleagues, and former teachers, along with an interview with the local newspaper. He thinks it’s important for people to keep in perspective that he’s neither brave nor heroic for speaking out.

“I just preached a sermon and called out racial injustice, and I was able to do it from a place of privilege,” Ward said. “I don’t have to live racial injustice every day like many people do.”

Ward doesn’t consider himself a current events preacher. Instead, he speaks out when he thinks it’s pertinent and hopes he does so in a way that helps people question their personal biases.

“I’m not a model activist by any means,” Ward said. “I think it’s important to keep in perspective that I’m a preacher who preached a sermon; I did the bare minimum.”

Ward, who is on the board for the Northeastern State University Wesley Foundation, believes the church as a whole needs to learn how to speak out on issues like racism or else risk being unable to connect with younger generations. He notes that Gen Z, an informal term used to refer to those born after 1996, is a generation that values engaging in difficult conversations and working to make the world a better place through dialogue and activism.

“We can’t say we want more young people, we care about our students, and we want campus ministry to be a pipeline (to the church) if we’re not addressing the real concerns of students that they’re facing,” Ward said. “The idea that we’re going to reach that generation by not talking about anything that’s divisive, not talking about injustice issues that they and their friends are living—it’s a myth. They’re not going to take us seriously if we can’t even have those conversations.” 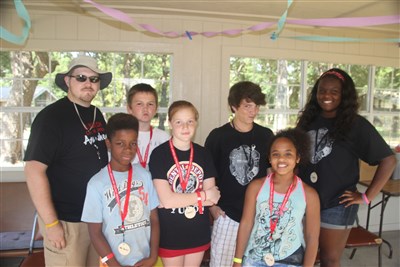 Dylan Ward (far left) stands with participants at New Day Camp, an outreach of Criminal Justice and Mercy Ministries, that breaks generational cycles of mass incarceration by working with children who have at least one incarcerated parent. Photo courtesy of CJAMM.

Though he doesn’t describe himself as an activist, Ward has been involved with Criminal Justice and Mercy Ministries through New Day Camp since he was 16 years old. This year, he’s a dean. He believes that those who support the camp are helping to address a problem deeply intertwined with race.

“I believe our criminal justice system is incredibly broken,” Ward said. “I believe it’s unjust, and I believe as Christians it’s our duty to work for justice.”

Ward notes that a majority of the campers he works with are children of color because the criminal justice system disproportionately affects people of color.

“We’re working to break cycles of incarceration, and it’s working,” Ward said. “CJAMM is good at what they do.”

Ward credits working with campers year after year for showing him how the criminal justice system interacts with them and their families because of systemic racism. Volunteering at New Day Camp also changed his opinion on capital punishment.

“I wouldn’t say I became an activist overnight, but I saw the face of the system…In this case, it was a child that didn’t care about anything else other than ‘they were going to kill my dad,’” Ward said. “If anybody can sit there watching a kid bawl, worried about that, and not having something move inside you, I would worry about that person.”

One aspect of anti-racism that Ward said “took a long road to realize” was the reality of white privilege, a term that refers to the societal privileges a person of light skin has that those with darker skin do not share.

“White privilege doesn’t say my problems don’t exist, it says the color of my skin doesn’t cause me extra problems,” Ward said. “It doesn’t mean anyone should be ashamed of who they are. It does mean that if we can make other people’s lives better by speaking up or working for justice or equality, why wouldn’t we?”

Though Inola UMC has not received any more hate messages, Ward doesn’t take that as a sign that he doesn’t have to speak out again. He believes racism should be discussed in every church and community, whether or not they are ethnically diverse.

“I think we need to remember as the UMC, a mostly white church, the things that affect our brothers and sisters should be our problems, too,” Ward said. “That’s what being a Christian is about: bearing each other’s burdens.”

When asked what he would tell other pastors who might receive a similar message in their inbox, Ward was direct: “You just go to work. You show back up. You can’t let one message derail everything.”

Ward recommends pastors, ministry leaders and anyone else to listen to and learn from those who have experienced real racism in their everyday lives.

In addition to praying for justice, he encourages others to research and engage in hard conversations about race and racism, especially with people who work for justice on a regular basis.

“It’s not just about prayer; most of the time prayer calls us to action – that’s the key,” Ward said. “It’s part of our Christian duty to walk alongside these experiences every day and ask what we can do to help.” §