‌At a dinner on April 23, Mary Hughes-Gaudreau received the distinguished alumna award from the Wimberly School of Religion at Oklahoma City University. The event was part of OCU’s All Alumni Weekend celebration.

Rev. Hughes-Gaudreau, B.A., Class of ’81, serves as director of emotional and spiritual care for the Oklahoma Conference of Churches, an interfaith group. She is responsible for OCC’s disaster, spiritual, and emotional care ministries.

She facilitates OCC’s training and credentialing of the spiritual care responders who are actively engaged in addressing the long-term spiritual and emotional needs of people affected by Oklahoma’s 2013 spring storms.

Since then, she has provided direct training, response, and consultation in more than 20 states after disasters.

Hughes-Gaudreau served as a national consultant for UMCOR (the United Methodist Committee on Relief), 2005-2013, and was the designer of UMCOR’s national spiritual and emotional "Care Team" program.

Sharon Betsworth, director of OCU’s Wimberly School of Religion, praised the honoree. "Rev. Mary Hughes-Gaudreau exemplifies the kind of servant leader that we seek to develop at Oklahoma City University. She serves all people, meeting them in the place of their deepest need. Her ministry and leadership are crucial in our community and country today." 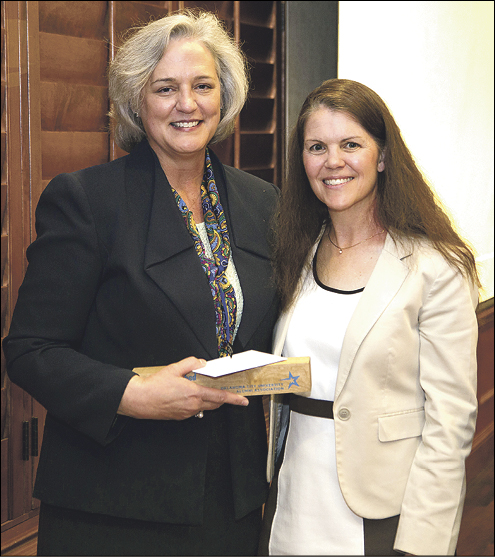 Sharon Betsworth, right, congratulates Mary Hughes-Gaudreau, a member of the Class of 1981 of Oklahoma City University and one of the school’s 2016 Distinguished Alumni.