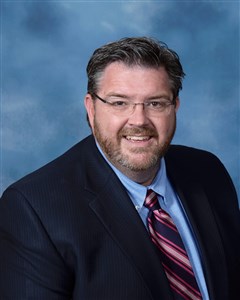 Derrek Belase, Executive Director of Connectional Ministry of the Oklahoma Conference of the UMC

The church I grew up in is closing, and I am responsible for selling it. To be honest, I never thought I would write those words.

I am a fourth generation United Methodist from rural southwest Oklahoma. My parents owned and operated a carpet store until my father’s untimely death in 1997. The two generations before him farmed cotton and peanuts.

This church nurtured me since birth, walked alongside us during the darkest days of family’s life, affirmed my call to ministry and sent me forth on the last Sunday of June 2003 to serve three small churches in Kansas.

Today, as the director of connectional ministries for our annual conference, I am responsible for managing all of the closed churches in the annual conference. This fateful task falls to me.

Like many churches across our connection, the eight to 10 remaining members are finding that the costs of appointed clergy, even part-time, along with building maintenance, utilities and other expenses, are just too much to keep up with.

Methodism arrived in Carnegie in 1904, three years before Oklahoma became a state, in the form of a Sunday school gathering taught in an old schoolhouse on the site of the Carnegie Cemetery. Divided by the issue of slavery, many communities had two Methodist churches during this era – a north church and a south church. Carnegie was no different. 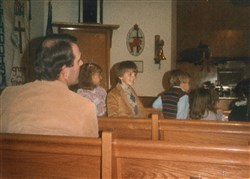 Belase as a child, with the Centennial Bell in the background.

It is this building, at the corner of Broadway and Ash, that will see its final worship service on the afternoon of November 20.

I can remember our 1984 bi-centennial celebration like it was yesterday. I got toothpaste on my shirt but my mom did not notice until it was too late for me to change my clothes. I deftly placed the nametag in the most awkward spot on my shirt to cover the stain.

I certainly did not realize the importance of that day at the age of seven, but I do now. I remember Lois Scott’s mother, Eunice, ringing the bell their family gave our church to commemorate that day. How appropriate that it was a Lois/Eunice duo.

Just three years ago, I stood in the pulpit of that church and eulogized the same Lois whose family gave the bell which still hangs on the wall to this day. I do wonder where that bell will find its new home.

The church family has experienced setbacks and hardships throughout the years. The ME North church building burned on March 18, 1910, just as construction was wrapping up. Before the ashes had cooled, the church voted to rebuild.

New zoning laws had been passed and so the rebuilt building had to be a brick structure. The cornerstone of that church now resides in the current building.

The Great Depression threw another curveball at the church. Rising to the occasion, as they always do, the women of the church began serving $1.25-per-plate lunches to the local Rotary Club. They started this project on December 7, 1938, and continued for the next 82 years without interruption.

Another very unique fundraiser was the annual “Calendar Supper.” Started in 1935 as a way to finance the youth activities, 12 tables were festooned with decorations depicting each of the 12 months. Participants sat at the table of their birth month and a rousing auction would take place after the fellowship supper.

I have so many other memories. When my father was dying of cancer, the entire church gathered around him one Sunday morning, laid hands on him and prayed for his healing. I can still see the people filling the front and the aisles.

They not only offered their prayers that morning. They brought food to our house, offered to do what we could not do ourselves, and hosted fundraisers for us. Paul’s words to the Galatians became a reality – “Bear one another’s burdens, and in this way you will fulfill the law of Christ.”

Today, the stained glass window in the front of the sanctuary is one of the only memorials to his life.

Each week, my mother made sure my sister and I were there in time for Sunday school. We would sing songs together in the old assembly fashion before breaking up into our various classes. We would climb the stairs to the second floor after the buzzer sounded throughout the building.

I would sit next to her as I learned the Apostles’ Creed, the Lord’s Prayer, my favorite hymns, and so much more. If I turned around, I could see my great-grandfather, Bud, and his brother, Doc, sitting a few rows back. I did not realize then that four generations of family in church on a Sunday morning is a rare gift, one which I took for granted.

I can remember all of my Sunday school teachers, Vacation Bible School during the summers, UMYF meetings on Sunday evenings. I have no idea how much pizza, Oreos and Kool Aid I have consumed in that basement.

And Christmas! What a magical time. The handmade Chrismons adorning the ceiling-height tree. The beautiful greenery strung around the sanctuary and the candles in the window sills of the stained glass windows. All I have to do is close my eyes and I am transported back there.

But the main thing I realized throughout the years in that church is just how much Jesus loves me because his followers showed me his love and taught me his love and sang about his love. I fell in love, too, and I remain in love to this day. 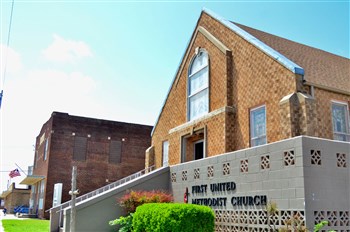 Carnegie First United Methodist Church will close November 20, but its legacy and ministries will continue long into the future. Photo by Tabitha Beckman.

The people of Carnegie UMC will go to church in Mountain View. Their building is conveniently built on one level and will be easier to navigate for the church members. My head can comprehend it but my heart still breaks.

In addition, the church’s wonderful food pantry ministry will be relocated to another historic building where the mission outreach of the church will continue well into the future. Burdens will continue to be made lighter.

I will be there on November 20. I will say a few words, but there will never be enough words, nor time to express my love for this place and the people.

And I will complete my responsibilities as caretaker of the building until it sells. It will likely be a quiet affair, conducted almost electronically when it occurs. Proceeds from the sale of the church will be added to our conference’s Legacy Fund and the history of this church will not be forgotten as new churches and ministries will be planted.

While I do this task with regularity, this one feels different — and yet, as the writer of Ecclesiastes reminds me, “For everything there is a season and a time for every matter under heaven,” including closing churches. May the seeds planted during their 118-year history in Carnegie continue to bear much fruit.