The secret is out, and Katy Hirsch is exuberant.

With college peers, she got to see and study a fragment of Psalm 11 from one of the oldest existing biblical manuscripts: the Dead Sea Scrolls.

Three Oklahoma City University religion students and professor Lisa Wolfe were chosen in 2013 to research the artifact through the Green Scholars Initiative by the Museum of the Bible. Their work was part of a collaboration by 50 scholars, reported in the book "Dead Sea Scrolls Fragments in the Museum Collection."

They had to keep secret their conclusions until the book’s publication in July.

Passionate about history and religion, Hirsch said waiting on the book’s release was hard. The time she spent studying the precious fragment "was such a journey for me, intellectually and spiritually."

Hirsch, Dr. Wolfe, and Ethan Watt spoke on Nov. 3 at OCU. Extra chairs were brought out for the crowd.

"I cannot possibly explain how exciting it is" for an undergraduate to get such an opportunity, Wolfe said.

Allison Bevers, Leigh Smith, Hirsch, and Watt were students in her class, "Readings in Biblical Hebrew."

The Dead Sea Scrolls consist of more than 900 scrolls — in tens of thousands of fragile fragments — found in clay jars in 11 caves beside the Dead Sea and other sites nearby.

Their subjects are biblical and non-biblical, some written in Hebrew and some in Aramaic, Watt said. They are between 2,330 and 2,050 years old. The first scrolls were discovered in 1947.

From connections made when the Oklahoma City Museum of Art in 2011 hosted the "Passages" exhibit, which showcased items from the Museum of the Bible, the adventure developed for the five-member team from United Methodist-affiliated OCU.

They used digital technologies to study photos of the tiny piece — which contained 1½ letters of one word — and were thrilled to view the actual fragment because the Museum of the Bible archives are in Oklahoma City.

The artifact "is so fragile," said Hirsch. "It had even deteriorated since 2009," when the photos were made. "We are so lucky to have those images" to study.

They determined its age through handwriting analysis in addition to carbon-dating.

Watt said, "There are even different spellings for (King) David over time."

The OCU team concluded the fragment is part of Psalms 11:1-4. It predates by more than 1,000 years the Masoretic biblical texts, long considered the authentic Hebrew text of the Jewish Bible and written between the sixth and 10th centuries.

The team found one variant, and collectively the Scholars Initiative identified three, between the artifact and Masoretic text.

However, "none made any difference whatsoever to the meaning of the Psalm," the professor said.

Despite 1,000 years’ difference, the texts are similar. "The stability of the text is an important discovery for all the Bible," she summed up.

With the research now published about artifacts that had been in private hands, largely unresearched, "scholars from now on can work on Psalms 11 and translate it, discuss it." Wolfe contributed a chapter in the new book.

Watt, now age 25, toured Israel with his mother right after his graduation from OCU. He got to visit one of the caves where the scrolls were found. Today he leads the youth at Duncan-First United Methodist Church.

"Now I have a great narrative to tell my youth," he said, "of the fight it was for knowledge and preservation of the Old Testament so we could progress into the New Testament. Youth might not understand the history for this culture was extremely tough to get through. We are so lucky today to be able to refer to something so old that can really stand the test of time."

Hirsch graduated in 2015. Age 23, she also works with church youths, in Edmond. 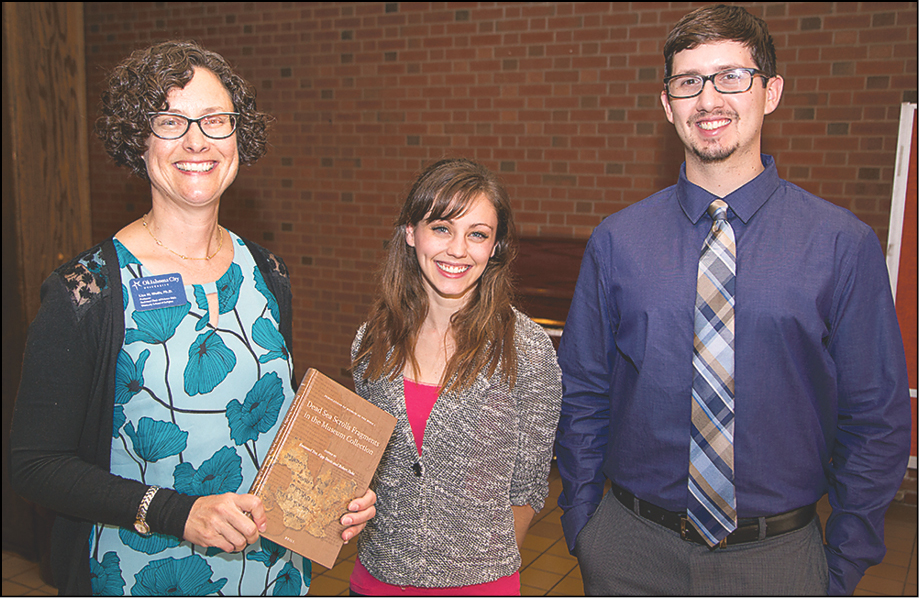