Students gather for OCU’s annual Matriculation Convocation. This year’s freshmen class is the largest in a decade.

The fall semester officially began with the Matriculation Convocation service on August 15, where Dr. Martha Burger performed her first public act as the newly inaugurated president by welcoming the incoming students and challenging them to seize the amazing opportunities they will have at OCU. Move-in week also included freshmen orientation activities, book discussions, fraternity and sorority rush events, and an involvement fair.

Oklahoma’s United Methodist university saw a nearly 25% jump in enrollment this year, bringing in the largest class since 2010. The gains come after a year of increased recruiting efforts, improvements to the residence halls and cafeteria, and a marketing campaign that utilized a mix of social media, print media, and billboard advertising. 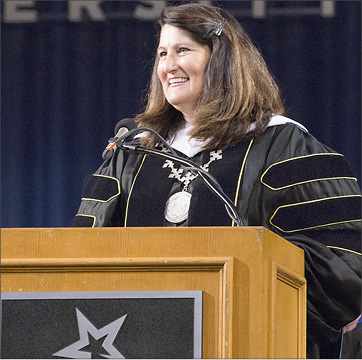 OCU President Martha Burger welcomes incoming students during her first convocation.
Making Disciples of Jesus Christ for the Transformation of the World