Seated at a piano in Eagle Creek, Ore., she lightly played a hymn ending in "Alleluia."

"That’s the one that was going through my head when I woke up this morning, out of all the ones I was working on last night," the clergywoman told Fran Walsh of UMTV.

Rev. Bartlett loves the spoken and unspoken details of worship, from tying prayers and music together, to setting the mood, with visual and interactive elements.

She will lead worship at the 2016 General Conference in Portland, Ore.

"What really gets me going is when I get to work on worship design and when I get to take all these pieces and weave them into the liturgy together and create something that does, in fact, help people claim their relationship with the Divine," she said.

Since 2009, she has hosted "Great Hymns of the Faith" at the United Methodist Alton L. Collins Retreat Center in Oregon.

At a recent "Great Hymns" retreat, she prayed, "The humblest thing You created sings your praise."

The events are a chance for music enthusiasts to learn more about the origin of favorite hymns.

"The hymnody is a great treasure which the church has accumulated over the centuries. And most of us don’t know nearly enough about it," said retreat participant David Poindexter.

"Charles Wesley said that he could sing religion into people a lot faster than John could preach it in," Poindexter declared. He is a fan of the most famous Methodist hymn writer.

And while teaching the group about Isaac Watts, Bartlett concurred with Poindexter: "Next to Charles Wesley — who was of course the greatest ever, I just need to make that clear — next to him, Watts is certainly one of the greatest hymn writers ever."

Watts composed hundreds of hymns. Among the best known are "Joy to the World" and "When I Survey the Wondrous Cross."

Retreat participant Betty Pritchard said, "A lot of people in a congregation find that they have some of their most inspirational moments during the music of the church. It adds to their spiritual experience during the worship service."

Bartlett’s perspective on music in worship is more direct. "I think that in many ways music isn’t just an add-on; music is an integral part of how we relate to God, how we understand at a deeper level that goes beyond words, what our relationship is with the Divine, and how we are shaped together as a community of faith."

Some at the retreats are choir directors who like to learn new hymns and ideas to share with their congregations.

But Bartlett pointed out that a church doesn’t have to have well-trained musicians to add excitement to worship.

She explained, "When we sing ‘For the Beauty of the Earth,’ I ask the women to sing one of the stanzas and then the men to sing one stanza, and then everybody comes back in. ... Many, many congregations would never think of doing that. Just that little bit not only gives some variety, but it also gives us a chance to listen to each other."

Participant Carol Seckel said, "We can memorize Scripture, but I find that we don’t do that a lot. But we do remember music." 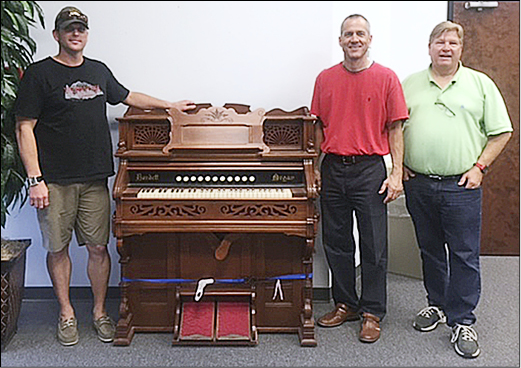 OF SPECIAL NOTE — At right: descendants of Methodist circuit-rider William Wood recently donated an 1860s pump organ to Choctaw United Methodist Church. Rev. Wood was minister there when the church was newly formed, circa 1892. He pulled the organ in a mule-drawn wagon as he navigated his preaching circuit. Now the organ is displayed in the church’s foyer. From left are Jeff Flick, Pastor Andy James, and Dan Flick. Dan’s wife and Jeff’s mother is Charlene Martin Flick, who is Rev. Wood’s great-great-granddaughter.