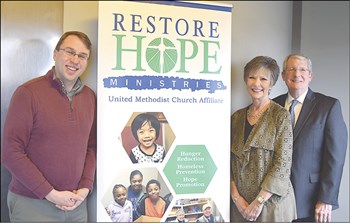 From left are Jeff Jaynes, executive director of Restore Hope Ministries in Tulsa, and Susan and Jim Linn, who chaired the United Methodist-affiliated agency’s 40th anniversary celebration on Feb. 9. Jim spoke of the joy he sees firsthand as he volunteers weekly at Restore Hope.
TULSA, Okla. — Restore Hope welcomed over 300 guests and raised almost $70,000 at its Ruby Gala on Feb. 9, celebrating the United Methodist urban ministry’s 40th anniversary of helping Tulsa families in need.
The night of dinner, music, and looking back over four decades of generous outreach and support for the agency was held in Asbury United Methodist Church’s Venue 68. Attendees also had the opportunity to tour Restore Hope’s new south satellite office, located in the Venue 68 building.
According to tradition, a red ruby is the appropriate gift for celebrating a 40th anniversary. The jewel brings to mind love, energy, and vitality — perfect themes for Restore Hope Ministries’ big event.
Since February 1978, the ministry has helped hundreds of thousands of its Tulsa neighbors. Its mission continues: helping prevent homelessness, alleviate hunger, support education, and promote hope for families every day.
Here are highlights from the most recent year (2016-’17).
4,135 families received 191,345 pounds of healthy food to fill empty pantries — including fresh produce from local farmers and ground beef from local ranchers.
411 Bibles were shared with households that did not have one. Over 1,130 clients chose to attend one of Restore Hope’s chapel services, and 52 found new church homes with the ministry’s help.
852 neighbors were saved from homelessness — a 99.41 percent success rate in keeping families out of the shelter system. The U.S. success rate averages 70 percent.
2,809 students began school with the supplies they needed, in new backpacks, to help them succeed.
Jeff Jaynes, executive director of Restore Hope, said the gala was held “to celebrate all that we’ve accomplished in the last 40 years and what we hope to accomplish going forward.”
Initially called “Tulsa District Cooperative Ministries,” Restore Hope was formed in 1978 to help alleviate a growing issue of urban poverty in that city.
With a network of support from other nonprofits, United Methodist congregations, and a generous community, Restore Hope helped thousands of families that first year.
Bishop Jimmy Nunn, Council Oak District Superintendent Cindy Havlik, and former Restore Hope Executive Director Larry Johnson were special guests of the Ruby Gala.
Chairing the event were Jim and Susan Linn, who are members of Tulsa-Christ United Methodist Church and native Tulsans.
Jim described his work at Restore Hope as one of the most gratifying experiences of his lifetime: “As a weekly volunteer, board member, and supporter of Restore Hope, I get to see firsthand the joy and hope of families who are able to meet their needs while facing hardship and life transitions.”
All proceeds from the gala benefitted the ministry’s operations and programs.