Riding bicycles with my dad on country roads is among my favorite memories. For Carlos Ramirez, however, apprehension forced his pedals faster when he cycled between the rural churches he once served in eastern Oklahoma.

His story riles me. The ordained United Methodist elder simply was pursuing healthy exercise, but racist whites were pursuing him.

Rev. Ramirez is a native of Mexico. Did they know he was a pastor? Would that matter to them?

These were 21st-century confrontations.

The continuing struggle against racism in the United States topped denomination news in 2015, according to the United Methodist News Service. Ramirez’s personal story confirms that justice work and peace building by United Methodists are necessary not only in places such as Charleston, S.C., and Ferguson, Mo., but also in Oklahoma.

A current Conference intercultural awareness project led by Ramirez is one such effort.

With grant money from the General Commission on Religion & Race (GCORR), he began offering diversity training to various leadership groups last year. He has presented to the Board of Laity, Cabinet, Annual Conference Council (ACC), Department of Communications, and others.

Demographic research that he uses underscores the urgency to connect the Church with more people of varied cultures.

In the U.S., 90 percent of United Methodists are white. But that’s not true of the wider population. One Oklahoma example: In the Panhandle, the population of whites in Texas County is 42 percent.

"We have the greatest theology, the greatest story" of God’s saving grace, Ramirez said about United Methodism. But statistics clearly show the Church’s numbers and influence continue to dwindle, especially where populations are growing in diversity.

"We are an endangered species," Ramirez has told Oklahoma’s leaders.

The GCORR-funded project develops intercultural relationships as a countermeasure.

He challenges them: What makes you uncomfortable and why? "Be honest with yourself. How you answer is due to your culture."

The project does not seek to change a person’s core values. The term intercultural does not mean better than, he explained to the officers.

"We have our differences; build skills that will allow you to gain what is needed. We are just trying to communicate. Stop seeing us and them. See the people in your neighborhood."

He asks boards to rethink recruiting, budgeting, even church planting, with diversity clearly in mind.

He encourages intentional outreach in mixed-economic areas, not only places of white affluence. According to researchers, U.S. ethnic diversity will continue growing — "and fairly fast" — and the white population will cease to be a majority.

Ramirez, to describe a few cultural differences, told stories referencing his Hispanic heritage, but the project’s goal to disciple all kinds of people remained paramount.

• "Despierta America" is the Spanish-language equivalent of daily TV’s "Today Show." But the former spends 20 minutes on horoscopes instead of news.

• Hispanic guests arrive late to parties because they don’t want to appear needy.

• A schoolteacher’s authority is unquestioned by Hispanic parents because, in their culture, power rests with the teacher. That also applies to pastors.

• 67 percent of Hispanics/Latinos in Oklahoma are native-born.

Intercultural awareness "is not a short task," Ramirez said. How to identify people willing to be bridges?

Board of Laity member Aly Shahan responded, "We are accountable to go out and share this information."

The board "has to get past putting people in boxes," said Lay Leader Chuck Stewart. "Don (Kim) isn’t THE Asian representative; Aly’s not THE young mom representative. It’s all of us."

Other wisdom surfaced in a book review group led by Ramirez.

"When we do need and depend on one another, astounding things happen in our discipleship experience," said Roger Parker, who chairs the Hispanic Ministry Committee.

OKC-Quail Springs Pastor David Clewell added, "The hope amid forces that would destroy us is to find each other and connect and love one another."

"This conversation could help us as we go forward. It helps me," said Rockford Johnson, Crossroads District superintendent.

To contact Ramirez about this project, email Cramirez@okumc.org. He is a UM missionary, serving in the Oklahoma Conference Office of Mission as Hispanic/Latino Ministry director. His missionary support code is 3021528. 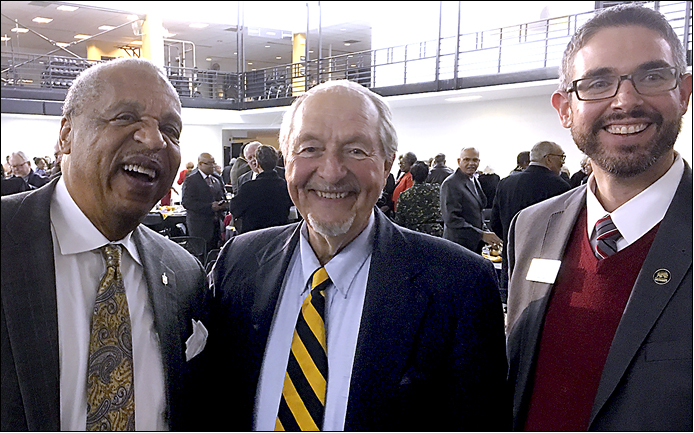 CIVIL RIGHTS ADVOCATE Bob Zellner, center, was named a living legend by TIME Magazine in 2014. He spoke Jan. 18 in Lawton at Cameron University’s 32nd Martin Luther King Jr. Holiday Celebration banquet. Some 60 years ago, Zellner worked with Dr. King, Rosa Parks, and others battling racism. His activism continues; in 2013 he was arrested for civil disobedience in North Carolina. Sponsors of the MLK Day events in Lawton include the Wesley Foundation at CU, directed by Brandon Dollarhite. College and high school students volunteer in the city that day. With Zellner are Bishop Robert Hayes Jr., left, and Rev. Dollarhite. Photo by Joseph Harris 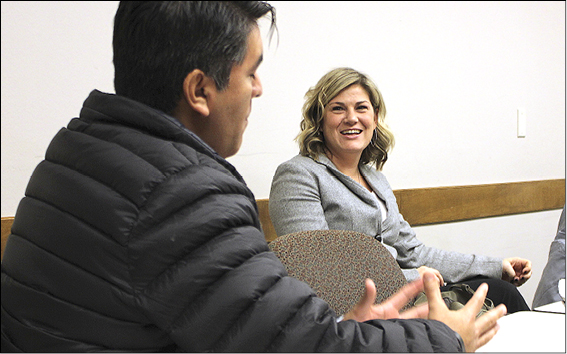 NEW MISSIONARY — Calley Piland, right, meets with Conference Office of Mission staff on Jan. 8 in Oklahoma City. In foreground is Hispanic Ministry Director Carlos Ramirez. From Austin, Texas, Piland was commissioned in October as a missionary with the General Board of Global Ministries. She is assigned to Guatemala, where she’ll work with Volunteers In Mission. The Methodist Church in Guatemala has 12,000 members in 132 congregations. The GBGM Advance code for Piland is 3022138. Photo by Holly McCray