Prison encounter: "I will praise Him in the hallway" 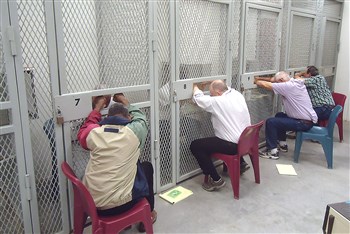 Volunteers pray with incarcerated men in the correctional facility at Boley. PHOTO BY JIM KEY
BY KRISTEN HARLIN
Criminal Justice and Mercy Ministries
Last month, I had the opportunity to go speak inside John Lilley Correctional Center at Boley, Okla. As I prepared my lesson, I began to pray for the men inside and that God would use me to share what I wanted to share.
When I arrived, the men were actively talking, but there was one man sitting in the center of the room who seemed agitated by his surroundings. While another man talked about how he had been reconnected with his family and how God was working on him, the man in the center of the room said very abruptly, “I have one good ear, and he’s in it.”
So I asked that man if he wanted to talk. He said that God hadn’t talked to him in eight years, “but I keep showing up.”
In response, I shared that a few years ago I, too, had felt as if God was not talking to me. But then a friend had told me: Sometimes we have to praise Him in the hallway and trust that He will open a door.
Inside the facility at Boley, we began our praise and worship music, as scheduled. The praise band was phenomenal, and you could feel the desire for Christ to be in the room.
As the second song began (“Even If,” by MercyMe), you could feel the anointing take over the room. I looked at the center of the room and saw my new friend began to cry, as did others in the room. I found myself needing a tissue.
The service ended with Communion, and the men began returning to their unit for head count. The man who’d sat in the center looked at me and said, “I will praise Him in the hallway, and I felt Him today.”
(CJAMM is supported by churches’ Apportionment giving.)
Making Disciples of Jesus Christ for the Transformation of the World