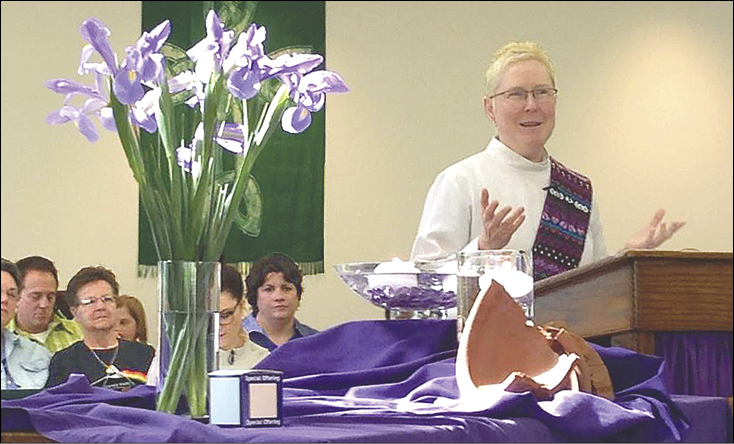 Growing up as a preacher’s kid can be exciting, Beth Richardson says. Her family moved every few years in Oklahoma. Each time, she and her two brothers had a different house and different furnishings to explore.

It was a different story for her mother, Marty, every time her father, Charles, was appointed to a different church. The movers asked where to put items in a house the family had never seen. "Let me look at the house first," her mother always said.

Growing up within the church made Beth "an enthusiastic Methodist," she said.

This Oklahoma PK wound up becoming a United Methodist deacon and joining The Upper Room in Nashville, Tenn., to edit and write. As director of creative content, she works with Upper Room’s beloved daily devotional booklet and its extensive web ministry. She has written three books — two on Advent and one on Celtic blessings. She also serves at Edgehill UMC in Nashville.

Recently Beth, who was born in Norman, traveled back to Oklahoma. She held listening sessions in Tulsa and Oklahoma City; Upper Room seeks to "help people grow in their relationship to God," she said. And she led workshops on Celtic Christianity, using her newest book.

Upper Room, which traces its origins to the Great Depression, was started by Methodists in 1935 to offer "something for people to hang on to hope," she said.

Amid today’s rapid technological changes, "we pray that God shows us the way into this next thing." The publishing ministry is studying new ways to deliver content to people, such as print-on-demand publishing of books.

During Beth’s childhood, other kids looked to her to pray at youth events because she was a PK. Her first job after high school was at a church camp beside Lake Texoma. An annual conference youth program taught her leadership skills.

When Beth thought about her future, "first, I thought I would marry a preacher." She didn’t know women could be clergy until she met a female Local Pastor in Mangum.

"That was very formative to me," she said.

She went to college at Oklahoma City University, "the only place I ever wanted to go." She studied sociology there.

Beth joined a group from Tulsa-Boston Avenue United Methodist Church for a stint with the Appalachia Service Project. That led her to move to Tennessee, where she completed seminary at Vanderbilt University Divinity School.

While Beth was in seminary, her mother became seriously ill but insisted Beth continue her studies. Her parents still lived in Oklahoma City.

The death of her mother at age 48 challenged Beth’s faith. "I could not understand where God was in that."

The "loving" Upper Room family has been a comfort to her, she said, with prayer mentors, afternoon prayer, and weekly chapel services.

During her 30 years with Upper Room, Beth said she has learned a different kind of prayer, which "led me to a deeper place."