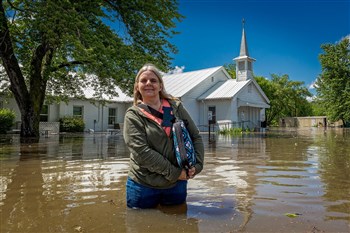 Shelli Pleasant, pastor of Avant United Methodist Church, stands in front of the church in water up to her thighs a day after a series of storms on May 20 resulted in near-historic flooding of the town. Photo by John Pleasant.
By Meagan Ewton

As severe weather continues to disrupt the Midwest, residents of Oklahoma are facing near-historic levels of flooding and preparing for the aftermath.

As of May 23, the Oklahoma Department of Emergency Management was reporting that recent storms across the state had resulted in more than 4,000 power outages, highway closures in 20 counties, three city-wide mandatory and voluntary evacuations, 74 injuries and one flood-related death.

In Skiatook, located in northeast Oklahoma, water levels from nearby Bird Creek flooded the town in several inches of water. Rev. Susan Whitley, who leads the United Methodist church in Skiatook, said some members have had to leave their homes until the waters recede.

“Even though we say ‘it’s just possessions,’ it’s still devastating, especially for our elderly folks,” Whitley said. “We will get through this, but it will take a lot of help to come together and do whatever needs to be done, whether that’s immediate needs like meals or a place to store belongings, or in the near future which is cleaning houses and cutting sheetrock. It will take a while to recover. We try keep that in mind and be ready to offer any assistance possible.”

The UM church in Skiatook was not damaged, but just a few miles upstream, the story was different.

The day after the first storm, Shelli Pleasant waded through thigh-high water to get to the church she leads in Avant. She estimated a foot of water was in the fellowship hall, and more water had spread to the sanctuary and a classroom. Though the church was damaged, Pleasant’s first priority was the people of Avant.

“My concerns right now are for the community at large,” Pleasant said. “There are many whose homes are flooded, but not many have been able to get back in due to roads being closed and high water making our main street impassable.”

Pleasant has spent the days since the storm connecting with the neighborhood and participating in a local Facebook group that connects people who have a need with community members who can help.

“I think the most important thing for me as a pastor is to be present and available with my church members and in the community for those who need someone to listen, pray, and help in tangible ways,” Pleasant said. “We don’t really know yet what we need yet in the way of manpower or even repairs to the church, or what our members might need.”

As more storms are expected for both Avant and Skiatook, potentially amplifying the current damage, the Oklahoma Conference is preparing disaster relief efforts. 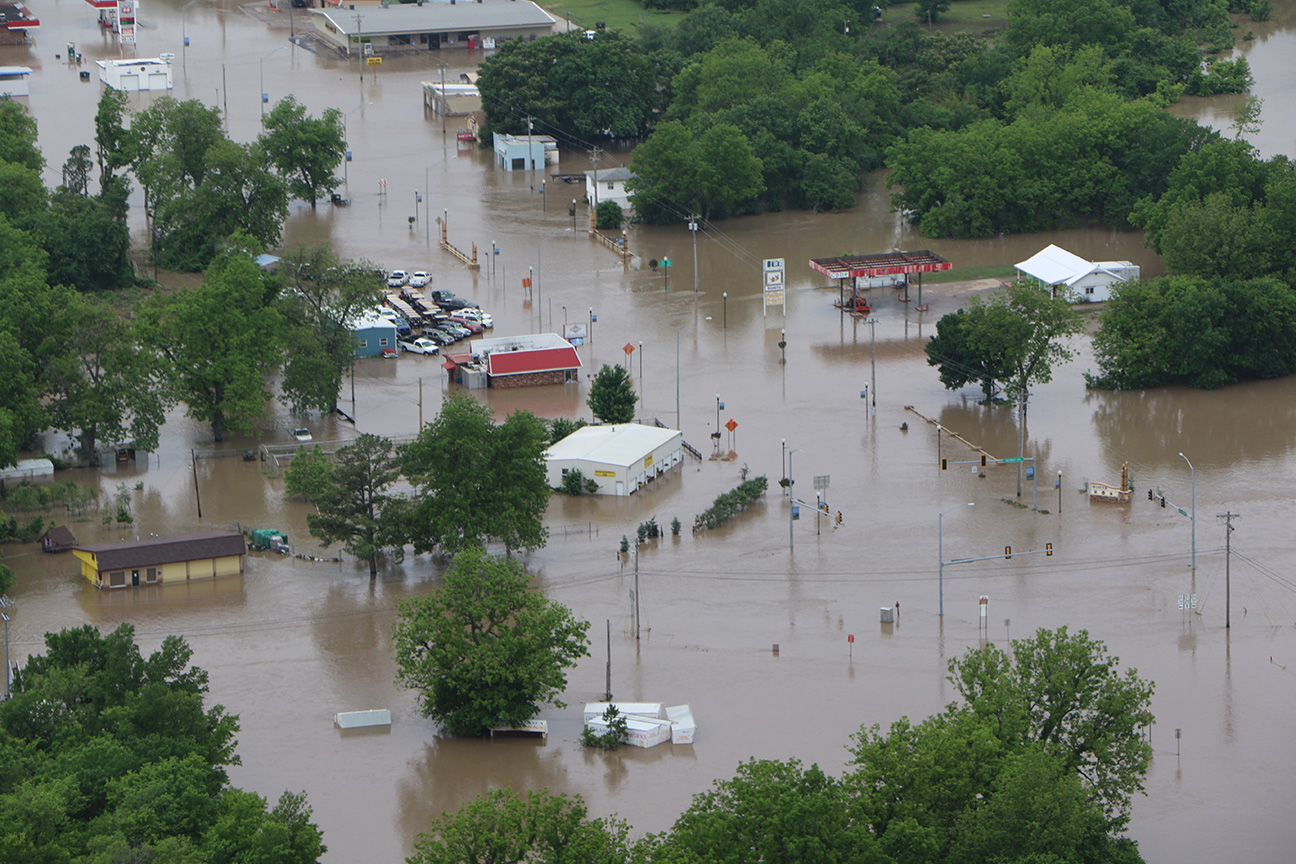 An aerial view of flooding in Skiatook. Photo by Lindsey Chastain of the Skiatook Journal.

“What we’re dealing with is not the storms over a weekend; we are dealing with the accumulation of spring weather and too much water,” said Jeremy Basset, director of the Oklahoma United Methodist Office of Mission. “The ground is already saturated, the dams are already full, so it’s an accumulative thing as opposed to one big dangerous storm.”

The accumulation has resulted in one of the most dispersed flooding events the state has seen in recent years, resulting in declared emergencies for 66 of Oklahoma’s 77 counties. Basset notes that the affected area greatly surpasses that of the 2013 flash floods that occurred days after an F5 tornado hit Moore.

“This is not a repeat of 2013,” Basset said. “It is not one event, it is not a centralized event, it is a dispersed water event with some tornadic activity. We can’t even estimate the number of cases.”

In Skiatook, main roads in and out of town were still closed days after the storm. Whitely said road closures were one of the biggest challenges facing local residents.

“Part of the problem is access to and from Skiatook is extremely limited. Major thoroughfares are closed, and even the back roads change hour by hour,” she said. “People are afraid to go anywhere because they don’t know if they can get out, and if they get out, they don’t know when they can get back.”

Rev. Dr. Mark Whitley, who leads Meadowcreek UMC in nearby Collinsville and is married to Susan Whitley, provided pastoral care as a volunteer firefighter during the water rescue evacuation of a local trailer park on May 21 at 1:30 a.m. The church van was used to help transport displaced families to a nearby relief center.

The following day, he prayed with a family as they were preparing to evacuate their home near Caney River. When he arrived, the road was dry; when he left an hour later, water was covering the dead-end road.

Disaster relief efforts are being coordinated among several state agencies, but Basset said it will be at least another 10 days to two weeks before teams are sent out because the threat of continued storms could put those teams in danger and make early efforts to clean or rebuild ineffective. Basset encourages those interested in disaster relief work to register their interest to serve on the OKUMC website.

“We have to just wait and see right now, but we’re on top of it,” said Basset. “It’s a frustrating waiting game, but this initial phase is limited to emergency responders.” 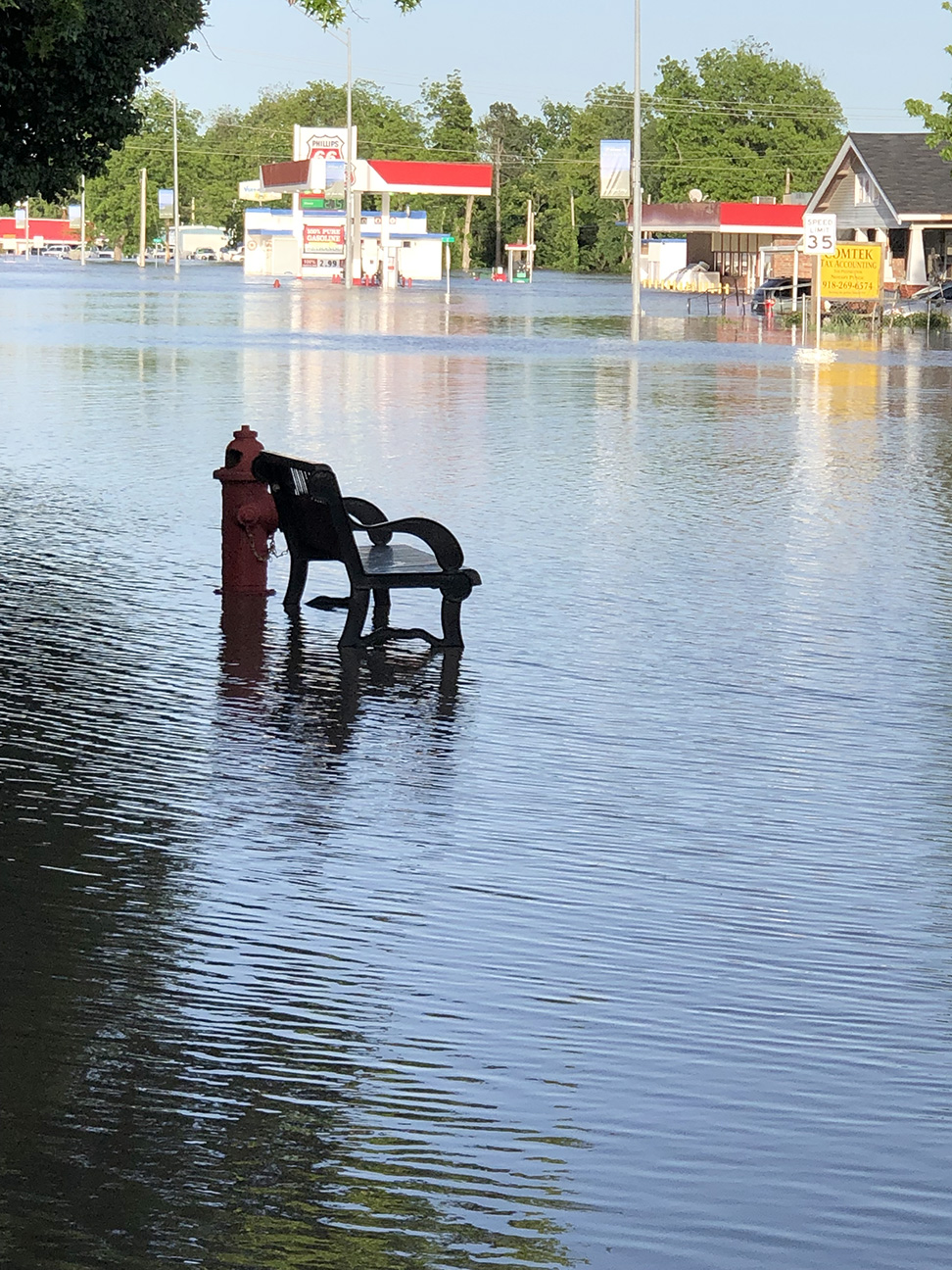 Flooding in Skiatook as seen from the edge of the waters. Photo by Rev. Susan Whitley of Skiatook UMC.

As more storms brew over the horizon, Pleasant says prayers and encouragement have been priceless.

“I have had so many reach out to me to let me know they are praying for me as a pastor, for my church, our Avant community, and they are sending words of love and encouragement,” she said. “These are tangible reminders that God is good and He is in control.”

Susan Whitley said recovery will take time and involve the entire community. She said a major focus of her pastoral care is reassuring people that the Skiatook church will be present with the community during the long process of recovery.

Mark Whitley agreed, saying the church would remain vigilant and work to be a presence of hope.

“The marquis outside our church has had this statement on it for a few weeks now: ‘Faith thanks God in the middle of the story,’” he said. “That kind of says it all.”