Past and present connect 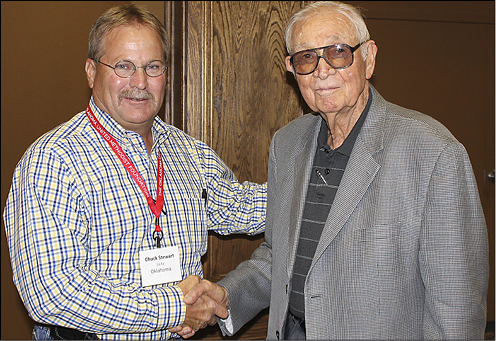 Chuck Stewart, left, of Stilwell and Carl Young of Edmond — current and former Oklahoma Conference lay leaders, respectively — meet at an educational event for delegates to the 2016 General and South Central Jurisdictional Conferences. OKC-St. Luke’s hosted the event on Oct. 29-30. During his term, Young started a leadership program for district lay leaders, and Stewart was in the first class. The St. Luke’s event drew 78 percent of the delegates from eight states. Bishop Robert Schnase of Missouri told them there are 4,774 "shalls" in the Book of Discipline. Bishop Patrick Streiff of Switzerland reported that the Discipline must be translated into 10 languages for use by United Methodists in central and southern Europe. Eight SCJ episcopal candidates were introduced.