Our Brother in Red 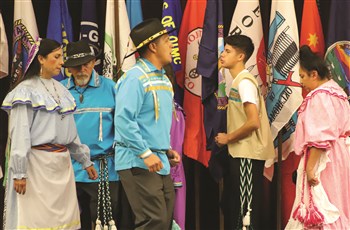 Before missionaries set foot on the continent, indigenous peoples in North America had a clear understanding of the principles of Christianity, according to the Rev. Donna Pewo, member of the Comanche Nation and director of the Clinton Indian Church and Community Center in the Oklahoma Indian Missionary Conference.

“I can remember my mom telling me a long time ago that we were spiritual before Christianity even came to our people because we already had a connection, a relationship with the Creator,” said Pewo. “We are a people of hospitality, we are a giving people, and we have much to offer to our communities and those outside of our realm.”

From the earliest origins of the Oklahoma Indian Missionary Conference (OIMC) in the 1800s to today, Native United Methodists have endured and fought to maintain their culture, identity and traditions against horrific odds.

“The early missioners had three tasks: to teach English, to make Native folk civilized, and to make them Christian,” said the Rev. David Wilson, OIMC conference superintendent. He said early missioners from the American Board of Commissioners tended to lump Native folk together without understanding the many cultures.

“They began to impose their beliefs in terms of their identity on Native people and teaching our culture was bad, our rituals are bad, and that are ceremonies are bad,” Wilson said.

For most of the 19th century, Methodism grew quickly across Indian Territory due to strategic methods the Church used, according to Tash Smith, author of Capture These Indians for the Lord: Indians, Methodists, and Oklahomans, 1844-1939. Methodists incorporated Native ministers into mission work quicker than rival denominations. In addition, the Methodists avoided expensive mission facilities relying on preaching places and boarding schools. In 1873, the Indian Mission Conference, a precursor to the OIMC, reported more than four times as many local Native preachers than “preachers in charge.”

“Between 1844 to 1907, any church that was operating in Indian Territory belonged to the Indian Mission, and they were supplied often by Native pastors,” said Wilson. “I tell people often that OIMC is the mother church of Methodism in the state of Oklahoma.”

While the church contributed to the historic trauma experienced by many Native peoples, it also provided some of the only places allowing language and culture to be used on a regular basis. Services were conducted in Native languages; Bibles and hymns were translated; and events were scheduled in conjunction with traditional gatherings, which allowed Native peoples to control their interaction with Christianity, according to Smith. He said that reliance on Native clergy created a problem for church officials because elements of Indian culture did not die out as mainstream white society hoped. In the 1880s, Our Brother in Red, the official newspaper for the IMC, captured editorials challenging the authority that had been given to Native preachers. By the early 20th century, mainstream Christianity viewed the prospect of Indians having any authority over churches as counterproductive.

“Our culture, language, rituals and ceremonies are part of who we are as Native people,” said Clarence Yarholar, a member of OIMC and the Muscogee Creek Nation. “I don’t want to forget who I am because this is how God made me. I cannot deny that, I want to share that.”

Many Native United Methodist Churches today remain among the only places contemporary tribal people can hear and speak their languages. Wilson says communities are changing and small towns are disappearing; however, the one critical thing that remains constant in those areas are the OIMC local churches.

“Once a week we get to come back together to hear our language spoken, to sing our songs, to gather together as a community and to reaffirm who we are as Native peoples, and then go back into the world to do what God calls us to do,” Wilson said. 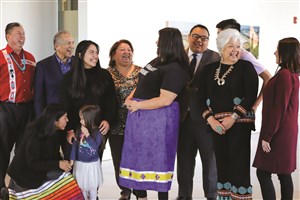 Research from the Harvard Project on American Indian Economic Development shows that after decades of poverty and social distress, the more than 600 federally recognized tribes in the U.S. are amid a resurgence. In many communities, tribes are flexing sovereignty rights to break cycles of dependence; they are taking back control, setting new standards of performance, accountability and conceptions of what is possible. Wilson says he sees the effect of the resurgence within in the OIMC.

“For a long time, the Native narrative has been filled in by non-Native people,” said Wilson. “We are now a couple of generations from the boarding school era. The young people take pride in being Native in a way that the older generations were not allowed to do.”

He said due to historic trauma, some Native churches will not include any cultural or traditional ceremonies at all. Working with the youth to rediscover and recover what has been lost is a priority for the conference.

“Unfortunately, the trauma we have experienced from boarding school experiences tells us not to do this,” said Yarholar. “But now, the baby boomers, I see them stuck in between. I believe they want to share some culture, what they’ve learned.”

Yarholar is currently drafting a paper on Native theology and hopes to hold dialogues among Native leaders about revisioning Native ministries. He says Native people should no longer have to choose Christianity over cultural identity.

“Sitting in four walls of church is not for everybody. For so many people it may be sitting in a teepee, sitting in the sweat lodge, or sitting under the brush arbor to connect to the Creator,” he said.

“The Oklahoma Annual Conference for years has been a great support in terms of their apportionments and now today’s second mile giving, which helps us to supplement our budget for pastor salaries,” Wilson said.

Wilson said the 2012 Act of Repentance to Heal Relationships with Indigenous Peoples was an important first step for the denomination. The experience has led to several annual conferences and agencies to start new partnerships with Native ministries and going so far as to returning land to tribes. However, the work is far from complete. He believes United Methodists could also play a stronger role in advocacy on contemporary critical issues facing Indian Country such as the epidemic of violence against Native women and children and stopping the use of detrimental stereotypes and mascots that negatively impact Native youth.

“We are a small voice and we need allies and advocates to help us be seen and heard for the well-being of our communities,” he said. “We do much with very little and have much to offer the church and the world.”

In 2019, the OIMC worked nationwide to reach out to Native communities in need sending school kits and flood relief support to members of the Yankton Sioux Tribe on the White Swan Reservation, the Oglala Lakota on the Pine Ridge reservation and the Standing Rock Sioux Tribe in South Dakota. 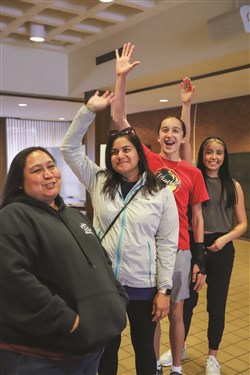 Native youth from the OIMC traveled to Kansas City to speak about Native American mascots at a national gathering of youth. Courtesy of Ginny Underwood.

Bishop Jimmy Nunn, episcopal leader of the OIMC and the Oklahoma Annual Conference, said his work with OIMC has reminded him to look deeper into ministry needs to find the spiritual values of the work.

“We measure so many things by sustainability,” Nunn said. “Instead of just asking is it sustainable, OIMC also asks how do we get the ministry done because the people are counting on us?”

With the United Methodist Church facing a possible schism at the 2020 General Conference in May, Pewo offers a Native perspective on unity. She describes the beauty of the round dance which is shared among many tribes. In the dance arena, the drum is considered the heartbeat. All people are welcomed into the circle to dance side by side in a fluid movement around the drum. As people enter, the circle expands to include those joining the dance. The intention is to leave disputes, disagreements and negative feelings outside the circle and come together as one.

In 2016, the OIMC began offering Native immersion experiences to help United Methodists and allies to engage and better understand its work. Participants visit historic sites within a day trip of Oklahoma City, including the Washita “massacre” Battlefield, which is a continuation of the Cheyenne and Arapaho story after the 1864 Sand Creek Massacre. Participants also can engage with tribal members at local OIMC churches.

“We have had a wide variety of participants including both lay and clergy, volunteers, and United Methodists who just have a heart for Native ministries,” said Wilson. “Everyone is welcome to come and learn more about Native United Methodists and experience our culture and traditions.”

Wilson says no matter what happens at General Conference, the OIMC will continue to build bridges of understanding and work to meet the needs of Native communities.

For more information about the OIMC or to learn about the immersion experience, visit www.umc-oimc.org. §