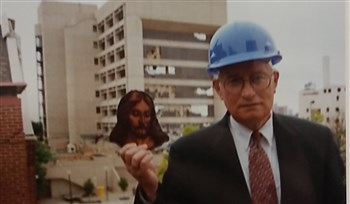 “Everyone knows Oklahoma for three things: tornadoes, the musical and the bombing. Even when I lived in the UK, that's what people knew about Oklahoma,” said Tabitha Beckman, who was only 10 at the time of the bombing. “I think it's just become part of our collective psyche.”

Across the state and across the country, people are remembering the 25th anniversary of the Murrah Federal Building bombing. Beckman, who grew up in Lawton but now lives in Oklahoma City, said the bombing feels both long ago and still present.

“I remember driving by OKC-First a few years after the bombing and seeing it still covered with scaffolding. My family went to the fifth anniversary and memorial dedication event,” Beckman said. “It's an important moment in our history and impacted a lot of people's lives.”

Mary Myers, who was working just over a mile away on the day of the bombing, agrees.

“In some ways it seems like it was a lifetime ago,” she said, “but every time the anniversary comes around, it seems more like it was just yesterday.”

Myers, who worked in computer services for the Oklahoma Conference at the time, thought that one of the air conditioners had fallen through the roof and shaken the building.

“I stepped out of my office and saw other employees doing the same,” Myers said. “While we had been standing around, Boyce Bowdon had been finding answers.”

Bowdon, the communications director for the conference at the time, had been conducting an interview in the lobby when the explosion took place. The interviewee said it sounded like a bomb he had heard while on a mission trip in Bosnia.

“We looked out the front door and saw smoke billowing up downtown. I thought it was coming from the First United Methodist Church area, and immediately ran to my car and headed downtown toward the smoke,” Bowden said. “From that moment for weeks that followed, I did my best to keep the United Methodist Connection and the local and regional media aware of the United Methodist’s ministry in response to the bombing, along with the inspiring faith stories I saw.”

Myers remembers hearing a plea for blood donations, so she and several coworkers got in their cars and drove to donate blood. She said the number of people volunteering to donate backed up traffic for several miles.

Less than 10 miles away, Tate Monroe was walking outside at Midwest City High School. He felt the blast and looked west to see the smoke cloud rising over the city. After school, he and other friends from OKC-First, one of the hardest-hit buildings, started calling each other to find out where to meet that night for youth group. It was then that he learned his father, a nurse at the nearby county jail, had contributed as a rescue worker on site.

“My dad had been tasked with carrying those who had not survived into our church where it was being used as a morgue and for identification,” Monroe said. “His telling of the sanctuary having imploded and collapsed in on itself was chilling.”

“Even more gripping was that all of the Easter lilies from service a few days prior were still standing lined up along the altar rails and unharmed, [and] the center of the stained glass Rose Window that featured the face of Jesus also remained intact,” Monroe continued. “These incredible symbols of God’s goodness also remind me of the large banner that went up on the outside of the church a few months later. It said, ‘Our God Reigns and We Will Remain!’”

Rev. Lesly Broadbent, who pastors OKC-First today, said this year’s memorial service is different because for the first time, it is entirely online.

“I think that the message that we have about the bombing is also the same message we need to hear about this coronavirus outbreak, and that’s words of hope and words of comfort in the face of despair and disaster,” he said.

Broadbent said it’s important to battle against the kind of forces that fueled the tragedy in 1995.

“The reasons behind Timothy McVeigh and others that were associated with the bombing, a lot of those stemmed from white supremacist beliefs and also anti-government beliefs, and those are both still in existence today,” he said. “Whether a person is in Oklahoma, or a person of faith or not, those are things we can all rally around to fight against.”

Monroe has worked to pass the history and his experience on to his children. He’s shared stories, pictures and articles with them, and he’s taken them to both his OKC-First and to the memorial across the street.

“There is, honestly, so much more I could [share] about this time period, from being interviewed by national publications and broadcasters, to entertaining rescue workers at the Cox Center… from rehearsing the musical Godspell in the bombed-out sanctuary… to the day we, as a congregation of almost a thousand people, walked together from Trinity Baptist Church where we’d held service during construction to the grand reopening of our church,” Monroe said. “Even in the midst of tragedy, there is proof of God’s blessings in the middle of it all. It’s all about what you choose to look for.”