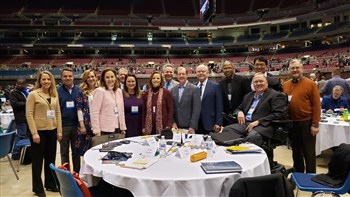 The Special Session of General Conference was called Feb. 23-26 to address the denomination’s official stance on human sexuality, namely to determine whether openly gay clergy and bishops could serve in leadership and if churches could host same-gender weddings.

It is the second special called conference in the denominatin’s history; the first was called to determine the denomination’s stance on slavery. The conference opened with a day of prayer, followed by day each of prioritization, legislation and a plenary session.

Delegates described their role as a heavy responsibility. Herschel Beard, who was attending his sixth General Conference, said he understood the level of trust an Annual Conference puts in its delegation.

“The process is difficult, and if you understand it and are willing to give yourself to it and participate, then I think you’ve done your job as a delegate,” he said.

Tom Junk, an alternate lay delegate who stepped in when lay delegate Chuck Stewart and lay alternate Sarah Nichols were unable to attend, said the delegation appreciated the prayers and emails that were sent to them in the weeks leading up to General Conference.

“We feel like we know what we’re doing,” he said. “Many of us are veterans here. We’ve been here before, but we’re still open; we’re still listening.”

Bob Long, pastor at OKC-St. Luke’s, said he read every email that was sent to the delegation.

Linda Harker, pastor at Norman-McFarland and head of the Oklahoma delegation, said she examined her experience through the lens of Micah 6:8.

“In one of the translations, to walk humbly with God means to walk carefully with God,” Harker said. “Carefully not in a sense of being afraid, but of being just aware of how God works in and through God’s people.” 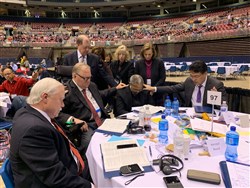 Members of the Oklahoma delegation pray for Joe Harris upon his election as chair of the legislative committee. Photo by Aly Shahan.

After several days of discussion and conflict, the delegates passed an amended Traditional Plan by a vote of 438-384, though there remained questions regarding the constitutionality of its petitions. Those questions are set to be addressed by the Judicial Council at its next scheduled meeting April 23-25.

The most visible of Oklahoma’s delegates during General Conference was Rev. Dr. Joseph Harris, who was elected to chair the legislative committee. As the chair, Harris oversaw the process of determining what legislation and amendments would be considered for approval by the following day’s plenary session. He described his role as a high honor and a deep responsibility.

“The church has been serious about this issue for a long time,” Harris said, “but because we come from different experiences, different theologies, and different places – both in the US and around the globe – it’s not easy to move things in one direction or the other.”

Another delegate who helped steer the direction of General Conference was Bill Junk, president of the Oklahoma United Methodist Foundation. After the One Church Plan was voted down 436-386 in the legislative session, Junk moved for the remaining business, including the Connectional Church Plan and the Simple Plan, to be cleared from the docket. He said bundling low-priority items that are unlikely to pass is a common legislative practice.

“The prioritization vote had the remaining petitions at about an 18 percent or less support level,” Junk said of his motion. “The time of the General Conference is short and valuable, and this practice helps us move to items we can actually pass out of committee for consideration during the plenary.”

Delegates voted to amend Junk’s motion to keep the Simple Plan on the docket; a similar vote on behalf of the Connectional Church Plan failed. After discussion, the Simple Plan, which would have removed restrictive language regarding homosexuality, was voted down 494-323.

Alyson Shahan, a delegate from the Oklahoma Conference, speaks during the debate on a Feb. 26, 2019, vote to strengthen denominational policies about homosexuality. The vote came on the last day of a Special Session of the General Conference of The United Methodist Church, held in St. Louis, Missouri. Photo by Paul Jeffrey, UMNS.

Disagreement on the floor

Much like the annual conference they represented, there was disagreement among the delegates regarding which plan would be best for the denomination to adopt. Three Oklahoma delegates spoke on the floor to address the plans under consideration: Rev. Sam Powers, Cara Nicklas and Aly Shahan.

Powers, pastor of Edmond-First, spoke in favor of the One Church Plan on Feb. 25, immediately after an amendment that would have helped make the plan constitutional did not receive a majority vote, failing 409-409. In a statement that evening, Powers said he believed the One Church Plan more accurately reflected the variety of views within the church.

“As we become more polarized in society, I like a plan that allows for a variety of opinion and interpretation since that is how we operate on less controversial topics,” Powers said. “When this is combined with a compassion for those who are often on the outside looking in, I feel that the One Church Plan is the more Christ-like plan.”

The following day, Nicklas, a lawyer, spoke in favor of the Traditional Plan. Her speech addressed the idea that love and agreement are not the same, and she used her feelings for her gay niece to support her statement.

“I think we need to change the dialogue on this deeply divisive issue,” Nicklas said. “It unfairly shuts down dialogue when I am accused of discriminating against and not loving my brothers and sisters from the gay and lesbian community. We need to find a better way of communicating with each other.”

Shortly after Nicklas spoke in favor of the Traditional Plan, Shahan, a fellow lay delegate, spoke out against it.

“When the suicide rates of our young LGBTQIA brothers and sisters are skyrocketing, the response of the UMC cannot be, ‘Come to my church where we will love you, baptize you and nurture you in your faith, but only until God calls you into ministry,’” Shahan said.

Despite their disagreements, both Shahan and Nicklas stated they had a positive experience connecting with Oklahoma delegates who held differing viewpoints.

“I must say our Oklahoma delegation modeled how we treat those with whom we disagree,” Nicklas said. “Despite our differences, we extended Christian love and respect to each other that was not demonstrated by all General Conference delegates. I was privileged to serve alongside the other Oklahoma delegates.”

Shahan agreed and said she plans to continue speaking out on behalf of LGBTQIA communities.

“I pray that no matter a United Methodist’s opinions on the passage of the Traditional Plan they act on the love of LGBTQIA persons and reach out and apologize for their pain,” she said. “I will continue to work and advocate for the acceptance of all of God’s children, not only in the UMC but also in acceptance of all of God’s children into leadership and ordained ministry in the UMC.”