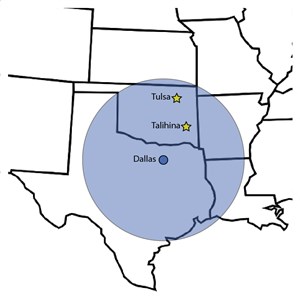 Two Oklahoma churches will participate in the Reboot youth ministry initiative: Tulsa-Hope and Talihina-St. Paul. Churches within 300 miles of Dallas were eligible to apply for the initiative. Graphic estimation of grant eligibility coverage created by the Contact.
Two churches in Oklahoma are participating in a new initiative centered on youth ministry.

Tulsa-Hope in the Oklahoma Conference and Talihina-St. Paul in the Oklahoma Indian Missionary Conference were among 18 churches announced as the starter cohort for “Reboot: The Congregation as Youth Worker.” Reboot is a new initiative of the Perkins School of Theology designed to equip entire congregations to serve in ministry with youth.

The Reboot initiative is funded by a five-year, $1 million Lilly Endowment grant awarded to Perkins in late 2018. The cohort is co-directed by Perkins leaders Rev. Bart Patton, director of Youth and Young Adult Ministry Education, and Dr. Priscilla Pope-Levison, associate dean in the Office of External Programs. The cohort was open to churches within 300 miles of Dallas and without a full-time paid youth worker.

“Each application received careful consideration by the 11 members of the Advisory Board, both individually and collectively,” Pope-Levison said in a release. “We’re leading with a diverse cohort of congregations. Our advisory board’s selection is a representation of what the church looks like across America.”

In a release, Patton said that while many churches delegate youth ministry to a paid staff member, the Reboot model involves the whole church and integrates youth ministry into the entire congregation.

“There is a change afoot in church growth, demographics, and size,” Patton said in the release. “We are invested in innovating with congregations that look like the now and future of the church.”

Rev. Thomas Hoffman, pastor at Tulsa-Hope, said he, the church’s part-time youth leader, and a youth lay leader collaborated on the church’s application.

“We heard about Reboot through an email broadcast that we received from them,” Hoffman said. “Because of our transitional status with both St. Matthew’s and Hope, and with Spot 31 (Hope’s after school program serving at-risk children in the neighborhood), we already knew we needed to pay some significant attention to our youth group. The invitation to apply to Reboot came at just the right time.”

Cindy Havlik, district superintendent for the Council Oak District where Tulsa-Hope is located, said she is thrilled that the church was chosen for the Reboot starter cohort.

“Tulsa-Hope has been deeply involved over the past five years in seeking ways to reach out to their changing and diverse neighborhood,” Havlik said. “Their efforts, alongside our Council Oak District Mission Strategy team, have brought about project funding that has enabled them to prepare the church building and property for a new day, as well as to take part in leadership training with the goal of becoming more welcoming to persons of color, and especially more effective in reaching out to the Latino community.”

“It is great that the new youth ministry initiative included St. Paul UMC in Talihina as a part of their cohort,” Wilson said. “I know the church will work hard to reinvigorate their youth ministry, and this cohort will help them to do so.”

An Oklahoma Conference congregation in Wilburton was also selected for the cohort, but the church declined to participate due in part to scheduling issues during the fall retreat.

“We do believe that the process of writing the application and putting the team together will help us move forward in the process of more actively engaging with youth in our community and making that more of a ministry priority,” pastor Dana Hugle said.

A fall retreat was held in September to launch a six-month discernment process that started with discovering each participating church’s existing strengths and possibilities for ministries with youth. Participating churches will submit a project proposal next year. From these churches, 12 will be selected as an innovation cohort to apply for resources provided by the grant to build and sustain an innovative model for congregational ministry with youth.

Hoffman believes Reboot initiative is a great opportunity and that he appreciates the initiative’s focus on leadership development for both youth and lay adults.

“Hope’s neighborhood looks like what more and more of what America will look like over the next 20 years: no ethnic majority, about a third of our families speaking some Spanish in the home, and culturally and socioeconomically diverse,” Hoffman said. “If our youth ministry—both inside and outside the church walls—can reflect this in its ministry, then what we do through Hope may be of some help to the vast number of other churches that are or will be going through these demographic changes in the years ahead.”