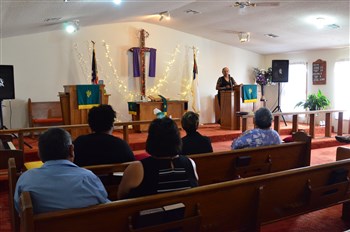 Delores Twohatchet, who attended the Ft. Sill Indian School in the late 1950s, shares about her experience at the Native American boarding school at a remembrance service hosted by the Oklahoma Indian Missionary Conference on Sept. 30. The National Day of Remembrance for Indian Boarding Schools honors the memory of those who died and survived the federal-run boarding schools that forced Native children to assimilate to white culture in an effort to eliminate their tribal culture and take over tribal lands. Photo by Tabitha Beckman.

The Oklahoma Indian Missionary Conference hosted a service in honor of the National Day of Remembrance for Indian Boarding Schools at JJ Methvin Memorial UMC in Andarko on Sept. 30. The service honored the memory of those who died and survived while attending Native American boarding schools.

The Department of the Interior released a report on May 11 that identified at least 408 boarding schools that were supported or operated by the federal government with the intention of separating students from their Native culture as well as take over lands belonging to Native tribes. It also stated that marked or unmarked burial sites representing more than 500 deaths were identified at 53 schools. Oklahoma had 76 boarding schools, the highest number of boarding schools in the country.

The remembrance service started with an opening prayer offered by Rev. Delana Taylor McNac followed by Comanche and Kiowa hymns led by members of the congregation. Rev. David Wilson, assistant to the bishop, introduced Delores Twohatchet as the morning’s speaker. Wilson invited her to be the morning’s speaker after seeing her share her experience during a visit by U.S. Secretary of the Interior Deb Haaland, herself a member of the Pueblo of Laguna. Twohatchet, a lifelong Methodist, was born to a Kiowa father and Comanche mother. She attended the Ft. Sill Indian School in the late 1950s.

“I remember when my dad took us to school,” Twohatchet said. “It was very traumatic to be left there. Even though some of my sisters were there, it was very lonely.”Twohatchet said her experience at Ft. Sill created the basis for her philosophy of education. While earning her bachelor’s and master’s degrees, Twohatchet was hired as a director for Native students at Southeastern State University at Durant. She wrote a grant for a program that provided academic counseling and tutoring services to all Native students. As a result, all of Oklahoma’s state universities hired Native counselors. 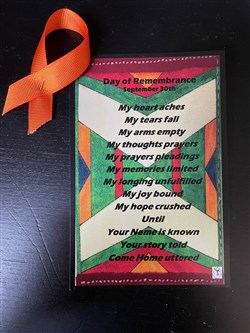 Postcard from the Indian Country Child Trauma Center at the University of Oklahoma Health Sciences Center. Photo by Tabitha Beckman.

The service included additional remarks by Rev. Derrek Belase, the director of connectional ministries at the Oklahoma Conference, and Dr. Dana Lyles, director of multi-ethnic ministries at the General Board of Global Missions. Rev. Lawrence Robinson offered a liturgy titled “Baskets of Clay” before Rev. Donna Pewo shared a closing prayer.

The full boarding school report can be found by visiting the Department of the Interior’s website at https://doi.gov.

To learn more about the OIMC, visit http://www.umc-oimc.org.