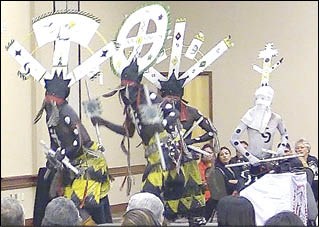 Four youths perform an Apache healing/curing dance.
By CHRIS SCHUTZ
Some members of the Riverside Indian School Crown Dancers had to duck to get their headgear through the door to perform at the Oct. 17 benefit gala of the Oklahoma Indian Missionary Conference (OIMC), held at the Reed Center in Midwest City.
Seeing the dancers was a treat for those who attended the biennial event that helps fund a leadership endowment for Native American pastors, said David Wilson, OIMC superintendent.
“It’s the first time many of us have seen those,” Rev. Dr. Wilson said.
The dance team consists of junior high and high school students from the White Mountain Apache and San Carlos Apache Tribes of Arizona. The students attend Riverside, a Bureau of Indian Education school located in Anadarko, about 850 miles from their homes.
They performed traditional Apache dances that are intended for healing and curing. “Crown Dancers bring blessings and ward off evil spirits,” according to the banquet program. Decorated with body paint and wearing tall crowns, the crew danced to jingling bells, tapping sticks, drumming, and chanting.
Wilson was pleased to report that, as of Oct. 19, about $80,000 had been raised for the pastoral endowment.
Three bishops of the Oklahoma Area — current episcopal leader Jimmy Nunn and retired bishops Robert E. Hayes Jr. and Bruce Blake — attended the gala and contributed to the fundraising. 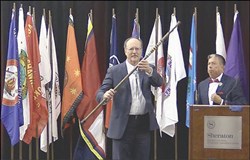 “God is calling people to serve in the OIMC,” Bishop Nunn said in his remarks. He noted that three OIMC pastors were ordained this year.
Nunn, who began his episcopacy in September 2016, said it has been “a great, great blessing to get to know the staff” of the OIMC.
Hayes got the room chuckling as he tried out his auctioneering skills to sell several items including a guitar autographed by country music stars Vince Gill and Roy Clark. The winner, Hayes promised, even would get a case! The item sold for $900.
Following the tradition of previous galas, Hayes auctioned a bow tie worn by Wilson. Hand-beaded with a cross-and-flame design, the tie brought $375.