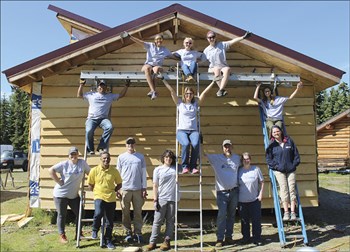 On June 1, a team of 12 students, faculty and family members flew from Oklahoma City to Fairbanks, Alaska for a week-long mission trip to build tiny homes as transitional housing for the homeless of central Alaska.

The work project, known as the Joshua Community Project, is a tiny house enclave started by Habitat for Humanity and now under the direction of the Fairbanks Rescue Mission.

When completed, it will have 10 double-occupancy cabins, a community building, an office and a shower house.

The team from OCU worked for five days to add locally sourced wood siding to two of the three tiny houses currently under construction on the site.

Members of the team also helped clean and organize the Habitat resale shop that is also on the property.

During the week, the missioners toured the rescue mission’s main outreach center and met with members of the staff and residents of the shelter. 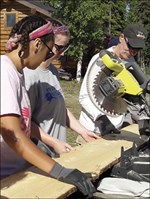 Team members cut lcoally sourced wood to create wood siding for one of the tiny homes in Fairbanks, Alaska.

The trip was book-ended with several cultural experiences which included a riverboat ride, a dip in the Chena Hot Springs and a bus tour of Denali National Park.

This is the university’s sixth VIM mission trip in the last four years under the leadership of Dr. Charles Neff, vice-president for church relations. Based on the success of these trips, the university already has plans to return to Belize in January and to Puerto Rico next summer.