Students from Oklahoma City University constructed part of a high school in Belize during the winter break.

"Our primary mission was to help construct the second floor of the Belmopan Methodist High School," said Rev. Dr. Neff. The team mixed and hauled concrete by hand, sifted sand, bent and tied rebar to make support columns, and assisted with other jobs as needed.

The team also purchased 100 pounds each of rice, beans, and flour and repackaged them in 2-pound bags for distribution to the villages surrounding Belmopan.

The OCU team also visited Marla’s House of Hope, a girls’ home, where the Oklahomans helped the girls with homework, played volleyball, and exchanged stories about life in their respective countries.

In addition to the mission projects, the team also attended worship services at the Belmopan Methodist Church, visited the Mayan ruins at Xunantunich.

They attended classes at the Methodist High School, toured the Belize Zoo, visited Belize City, and finished the week with a jungle zip line and cave tubing adventure.

Due to a generous $5,000 grant from the United Methodist Woodworth Estate, the trip cost was minimal for students.

This is the second year that Neff has led a trip to Belize over the winter break, and there is hope that it will become an annual event. 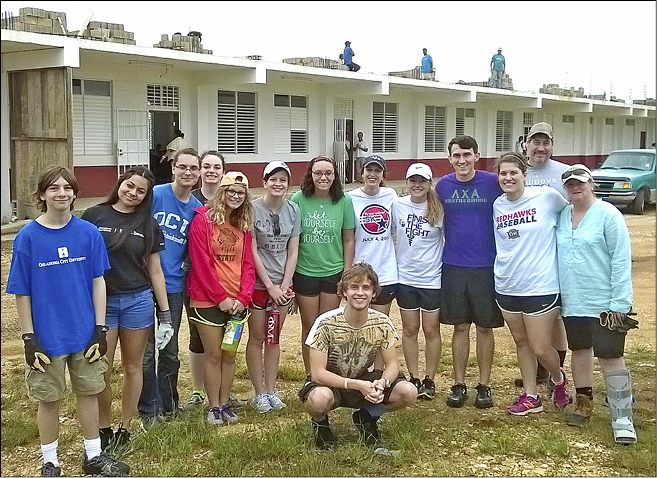 OCU students and friends pause a moment from working at a high school.