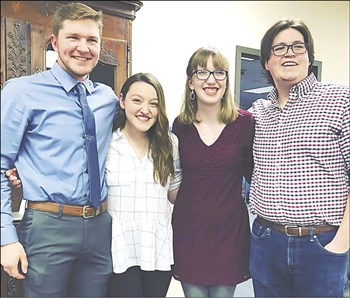 With an hour to go before the start of the November conference, the Oklahoma City University senior decided to tour the seminary booths. She headed first to Garrett-Evangelical Theological Seminary’s display and to the recruiter she’d met a few weeks earlier when visiting that school, in the Chicago suburb of Evanston.

As Riley approached, the recruiter smiled and said, “I have something for you.” Reaching behind the table, she drew out an envelope with Riley’s name on it.

As her peers from OCU looked on, Riley opened the envelope and burst into tears. She had been awarded a full-tuition scholarship to the United Methodist-related graduate school.

A native of Oklahoma City and member of OKC-Quail Springs UMC, Riley first experienced her calling to ministry in seventh grade.

Next month this OCU Bishop Scholar will graduate with a B.A. degree in religion. In summer she will move to Chicago, then begin her seminary studies in the fall.

“I’ve never lived anywhere other than Oklahoma City,” said Riley. “I’ve never even moved houses. I’m excited and terrified, depending on the day.”

Riley credits her studies at OCU for thoroughly preparing her for the next stage of her education.

“Seminaries love our students,” said Sharon Betsworth, director of OCU’s Wimberly School of Religion. “We have heard time and time again that our graduates are better prepared for seminary studies than most students. As a result, our graduates usually receive pretty generous scholarships.”

Ordination in The United Methodist Church has been Riley’s end goal for years.

“That’s always the only thing I’ve ever wanted. It’s always been the next step,” Riley said.

“I want to work to reconcile the church with people who have had bad experiences with religion. It’s been such a good thing for me, but I’ve seen it be bad for other people. I want to be part of fixing that.”

After completing her master of divinity degree at Garrett, Riley plans to return to Oklahoma and serve as a clergy elder in the Oklahoma Conference.