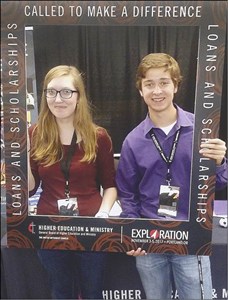 Every two years the General Board of Higher Education and Ministry hosts a three-day gathering for young adults, ages 18-26, who are actively discerning a calling to ministry.
Named “Exploration,” the event features moving worship, inspiring speakers, small groups, and opportunities to meet representatives from the 13 United Methodist seminaries.
On November’s first weekend, 300 young adults descended on downtown Portland, Oregon. Five were from the Oklahoma Conference: Oklahoma City University students Melaina Riley, Jenny Johnson, and John Vick; OU freshman Tanner Carlson; and Kevin Tankerson, who directs the Wesley Foundation at Langston University and attends Saint Paul School of Theology at Oklahoma City University.
“The event was amazing,” said Vick, a sophomore religion major. “The worship, the workshops, the small group conversations — everything was top notch. The entire event was so refreshing, as we were surrounded by hundreds of young United Methodists who were passionate about loving God and being in ministry.”
The high point for Riley, a senior religion major, came in the first minutes of the conference.
At the booth for Garrett-Evangelical Theological Seminary, she personally received her letter of acceptance to that school. Accompanying it was a full-tuition scholarship.
“I was in tears,” said Riley. “I can’t think of a stronger confirmation of my calling.”
All Oklahoma’s students said they returned home with a good sense of God’s direction for them as they journey toward ordained ministry.
They were accompanied by OCU Vice-President Charles Neff.

When Hurricane Harvey struck Texas mere days into the fall semester, Oklahoma City University students immediately began asking what they could do to assist those in need.
The OCU Wesley Center quickly arranged to place collection bins around campus for relief supplies. Donations continued to flow in from students, faculty, and staff as two more major U.S. hurricanes hit within weeks.
The effort concluded Oct. 31, and student volunteers helped sort over 400 items. Most were placed in buckets for the United Methodist Committee on Relief (UMCOR) to distribute in affected areas. Clothing, pet food, diapers, and other items were sent to other relief agencies in Texas.

A highlight for music lovers is OCU’s Christmas Vespers. The service brings together more than 250 choral singers and orchestral musicians. Two concerts are offered: 8 p.m. Dec. 8 and 4 p.m. Dec. 9, at First Presbyterian Church, NW 25th and Western, a few blocks east of campus. Get tickets, $15 per person, from the OCU Box Office, www.okcu.edu/main/christmas.