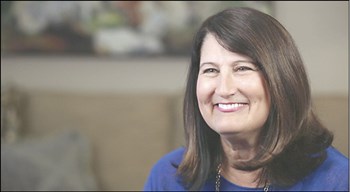 Oklahoma City University will have its first female president beginning this summer. OCU alumnus and trustee Martha Burger was named the university’s 18th president on March 25.

“I am excited and, understandably, a bit nervous with anticipation and anxious to roll up my sleeves and get into it,” Burger said March 26.

She’s interested in getting feedback from students and learning what she can do to better the future of the university. She also said she’s excited to interact with students.

“I’m going to be doing a lot of listening. You know, I have some thoughts, but it comes from the filter of a trustee, and I’m really anxious to continue to get input from everyone.” She has served on the board of trustees for the United Methodist-related university since 2008.

“I grew up in the ’60s during a time that’s well-known for student activism, and I see a rebirth of engagement in the big picture,” she said. “I know it’s been happening at universities, but I’m anxious to be a part of that perspective and that energy.”

Ron Norick, chairman of the trustees, sent an email to the campus community on March 25, reading: “Martha Burger is the right person to guide OCU forward. I am delighted that she has accepted the position, and I am very excited abouuniversity’s future.”

He said the trustees received applications from more than 40 candidates and narrowed those down to three. Burger originally was on the presidential search committee but stepped down after she was nominated as a candidate.

Burger also said she is excited to take on the role as the first female president of OCU. She said she feels humbled and proud to be a woman in power.

She has served as senior vice president of human and corporate resources at Chesapeake Energy Corp. She also co-founded Amethyst Investments LLC and is a member of the board of directors of Tapstone Energy.

“I have sponsored, mentored, and developed women who are professionals in the business community for decades. So I think this is one more way that I can pave the way for others after me,” she said.

Student Carly Youngberg said she’s especially excited that Burger will be the university’s first female president. “That’s exciting for me as a woman, too. I’m excited to see what she can bring to the table, for sure,” said the sophomore English major.

Students met with Burger on March 19 during a student session. At that event, Burger said her top priorities as president are to grow and nurture programs at OCU.

“What I want to do is to work on growing the university, and I don’t just mean in enrollment, but I mean by being able to invest and nurture programs that we have that are already excellent, but need continued maintenance or additions to make them even better,” she said at the session.

She also plans to use her business background to benefit the university economically.

“I come from a finance background, so I talk about things in those kinds of terms, but they translate to the heart of things, not just the numbers around things,” she said. “The university has worked really hard to mind their expenses. We’ve gone through some tough processes and decisions, and we are to a great stable place where we live within our means.”

Blake Lemmons, a junior majoring in political science, said he thinks Burger will do well despite an initial learning curve.

“I really think that Mrs. Burger’s going to be great for the university because she’d be good at fundraising and everything, and she already has a really good working relationship with the trustees because she was a trustee, and she knows how to be an administrator because that was her role at Chesapeake,” Lemmons said.

Karen Youmans, who is OCU honors program director and an associate professor of English, said she’s excited so many students were interested in the process.

“I’m encouraged by the number of students who showed up to ask questions,” Dr. Youmans said. “I think that speaks well of our student body.”

President Henry said, “Martha is a unique individual. She is brilliant. She was a female executive in a male-dominated world, and nobody had any doubts as to her skills and strengths.”

Henry said Burger is familiar with the Oklahoma City area, which will be positive for fundraising, and he is confident in her management of finances.

“We’ve worked on all sorts of matters, from settling lawsuits to handling insurance claim files to working with investments to working with facilities. She just really knows those financial matters,” he said. “I suspect that was something the trustees were interested in.”

Henry said he admires Burger for her ability to constantly read, learn, and travel.

“She’s been around to a lot of places and always studies those places and learns about them and brings new thoughts and ideas,” he said. “She’s a lot of fun to be with and very smart and very tough.”

Henry said students will enjoy getting to know Burger. “I think she will blend right in,” he said.