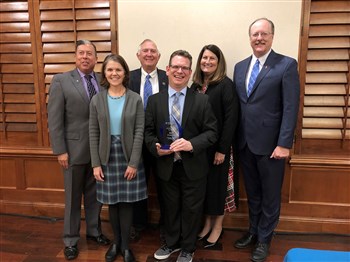 Alumnus Ron Norick, chairman of the OCU Board, was honored for his tireless work in connecting OCU to the greater community and for serving as a stalwart supporter of the link between OCU and the United Methodist Church. Norick served as mayor of Oklahoma City from 1988 to 1998 and was the chief architect of the first OKC MAPS project in 1993.

The second award was given to the Lemon family recognizing siblings Larry Lemon, Lynette Lemon Wert and Martha Jean Lemon. Members of the Lemon family have been generous supporters of higher education for many years. In 2009, they established the Martha Jean Lemon endowment to provide scholarship assistance to religion and sacred music students at OCU and seminary students at Saint Paul School of Theology at OCU. The gift also established a distinguished lecture series that brings notable speakers to campus each year.

Also honored at the banquet were two OCU Wimberly School of Religion alumni. Mark Crenshaw was named the Wimberly School of Religion Distinguished Alumnus for 2018. He serves as the director of inter-disciplinary training in the School of Public Health at Georgia State University and is a vocal advocate for persons with disabilities. Brandon Katzir was named the 2018 Rising Star. After graduating from OCU, Katzir went on to earn an MA from OSU and a PhD from Louisiana State University. He now serves as associate professor of English at OCU, specializing in medieval and early modern rhetoric and world literature.