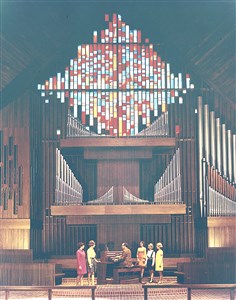 Interior of Smith Chapel shortly after opening
In the fall of 1967, massive steel I-beams began to rise in pyramid-shaped sections above Historic Route 66 on the campus of Oklahoma City University. Ground for the campus’ new chapel had been broken the year before, on May 26, 1966, but it was not until the spring of 1968 that construction of the Bishop W. Angie Smith Chapel was finally completed.

In a service attended by four Methodist bishops, the house of worship was consecrated on May 9, 1968.

With its unique triangular shape and a spire that reached 151 feet into the air, Smith Chapel became immediately iconic. It was designed by world-renowned architect Pietro Belluschi, who was honored for his work by receiving an honorary degree from OCU and who also gave that year’s commencement address. MIT professor of visual design Gyorgy Kepes created the chapel’s prominent stained glass windows, for which he was awarded a gold medal in fine arts from the American Institute of Architects.

The chapel was named for Bishop W. Angie Smith, who served as Bishop of the Oklahoma-New Mexico Area and the Indian Missionary Conference for twenty-four years beginning in 1944. He also served as president of the OCU board of trustees. When plans were made to build a chapel on the campus of OCU, the board voted to honor the episcopal leader by naming it in his honor.

Immediately following consecration, Smith Chapel became the new home for the Pastor’s Licensing School and the School of Mission (the predecessor to Mission U). Weekly chapel services began in the fall semester, with Dr. William (“Bill”) Oden, then pastor of Aldersgate UMC and later Bishop of Louisiana (‘88-96) and Dallas Area (‘96-04), preaching the first sermon on Sept. 8, 1968.

Over the last fifty years, the Chapel has served as the heart of OCU’s religious life. It has been home to the Wimberly School of Religion, the United Methodist Student Fellowship, and, 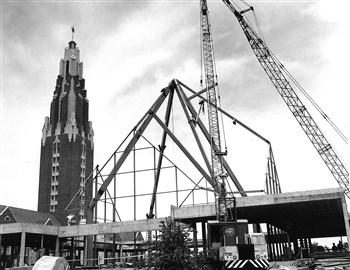 since 2008, Saint Paul School of Theology. The campus community gathers several times each week for worship: Monday nights in Watson Lounge for student-led Evensong, Tuesday mornings in Harris Chapel for Saint Paul’s chapel service, and Thursday afternoons in the sanctuary for OCU’s chapel service. The space is also home to the Wesley Center, Kappa Phi Christian Sisterhood, and Delta Alpha Chi Christian Men’s Fraternity and is used by numerous other campus and community groups throughout the week.

OCU will celebrate the fiftieth anniversary of Smith Chapel at a special re-consecration worship service on Thursday, Nov. 8 at 1 p.m. Dr. Amy Oden, Saint Paul professor of early church history and spirituality and cousin of Bishop Bill Oden, will bring the message. Worship will be followed by a reception in Watson Lounge where photos from the chapel’s construction and regalia from Bishop Smith will be on display. The event is free and open to the public. Guests will find it easiest to park in the lot with the digital OCU marquee on 23rd street between Blackwelder and McKinley.