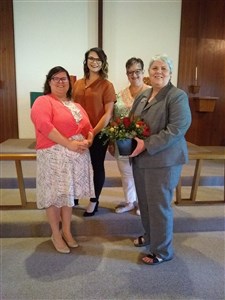 The Committee on the Status and Role of Women recognized Rev. Tish Malloy at the 2019 Annual Conference as the 18th recipient of the Francis E. Willard Award.

Named after 19th century Methodist and suffragist Francis E. Willard, the award recognizes and celebrates those individuals who have made a significant contribution to the status and role of women in the Oklahoma Conference of the United Methodist Church.

As part of the District Pastor’s Gathering of the Northern Prairie on Aug. 15, the district recognized Malloy for this award and celebrated her continued advocacy and support of women and men in ministry. Representatives of COSROW, the District Superintendency Committee and the Clergywomen’s Group shared history of the award and the four nominations Rev. Malloy received for the award. Highlights from those nominations included the following comments:

“Tish Malloy has shown great encouragement of female clergy by supporting the development of a new female clergy group within the district. She often opens her home to host these events which allow discussion of pertinent issues facing the church, problems particularly relevant to female clergy, and to create opportunities to build strong bonds on friendship within the clergywomen of the NPD.”

“Tish listens and offers guidance as needed. She is an advocate for women in ministry as is apparent by the many women serving in her district. She is helpful in her encouragement. After sharing with her, one feels the confidence to go forth and fulfill one’s call, even in difficult circumstance. Her gentle persuasive leadership creates a desire to be a better pastor in all circumstances.”

“Whether pastoring a local church, leading a conference ministry, or serving as District Superintendent, she has ministered with grace, passion and compassion. She has been a role model for women in ministry as she has shown that a woman can effectively serve in a variety of ministry roles.”

“Her work ethic, fearless leadership in hard situations, steadfast encouragement, accountability and support make her a commendable pastor and excellent role model. Tish is the kind of leader that makes you want to show up and be better and do better.”

In addition to the conference award, flowers and a tribute video crafted by Tabitha Beckman were presented. Additionally, a donation to Circle of Care was made in Malloy’s name to celebrate her continued advocacy for vulnerable children and families.