No one goes hungry in Dewey 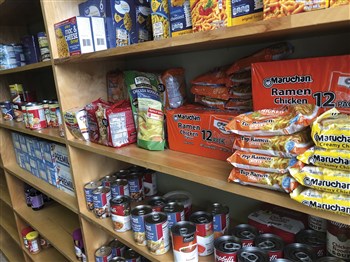 The Bread of Life Food Pantry is supported entirely by church and community donations. After just a few months, the church is assisting an average of two families per week. Gilliland and Cook both hope to see the pantry grow to include freezers so they can offer frozen foods and meats. Photo by Jinx Barber.
By Meagan Ewton

What do you do when your church has extra space and your community has a need? If you’re Dewey United Methodist Church, you fill it with food and give it away.

Rev. Jinx Barber arrived in Dewey, Oklahoma in October 2017. He soon discovered Dewey was the kind of city that closed off downtown traffic to host a longhorn cattle parade, a signature event during Western Heritage Days. Dewey United Methodist Church made an equally strong impression on Barber, who quickly noticed the church’s enthusiasm for local mission work. When Barber downsized the church’s library, members of the church saw an opportunity to fill the empty bookshelves with a food pantry.

“Our church learned that there really weren’t any food pantries in Dewey that were facilitating distribution for the Dewey area,” said Jeanie Gilliland, who co-chairs the food pantry. “We’re just up from Bartlesville, so as a church, we got the idea that maybe we should have a food pantry.”

“This all started with a simple question of math,” Barber said. “There are 3,499 people in this town. Statistically, an average of 800 of those are food insecure. What if we could leverage the community and their community spirit so that no one ever goes to bed hungry in Dewey?”

“I was that hungry child”

Gilliland, who serves as president of the UMW at Dewey UMC, said she was one of the first to discuss the pantry with Barber.

“It was just something dear to me. Like I told Jinx, I was that hungry child,” Gilliland said. “We ate lunch at school, sometimes we went to bed with supper, sometimes we didn’t. When you experience that as a child, you think, here’s an opportunity, let’s do something.”

Barber harbored some personal hesitations about the logistics of starting a pantry. Experience had taught him the work would be more than the church’s staff could handle alone, and he didn’t know if there would be enough volunteers to do a traditional food pantry. He also wanted to ensure the church wouldn’t have to end one ministry to start another with the pantry.

“We decided to be intentional and take our time,” Barber said. “We didn’t want to rush. We didn’t want to start something that we would close in a year because we couldn’t commit to it. So we did what all good Methodists do: we formed a committee.”

with the idea of doing it”

Committee members began to research what it would take to start a food pantry in their church.

During the planning meetings, the committee decided against including the church’s name in the pantry’s name. They also decided to focus their reach to people with addresses in the city of Dewey.

“We’re the Bread of Life Food Pantry, and the vision is no one goes hungry in Dewey,” Gilliland said. “There are other pantries in Bartlesville, which is a bigger city, so our focus is on Dewey.”

After careful consideration, the committee also decided not to accept food from a community food bank because of the inflexibility it would create. Barber said the pantry still adheres to health department precautions.

“Government subsidized food pantries place limits on how often people can come and how much they can receive,” Barber said. “They also require a lot of paperwork and even possible building renovations. This would have increased the number of volunteers we needed beyond what I think we could support.”

The prospect of starting a food pantry based entirely on community donations didn’t deter Gilliland at all. She believed God would provide what the pantry needed.

“Everything starts with the idea of doing it, and if your heart is in the right place,” Gilliland said. “I was thinking, why? Why do we want to limit what we’re giving out? God will provide. What we need, what we give out, we’re feeding the community. The rest will be provided as we need to give.”

“None of us are looking

for top bill on this”

In Dewey, the ministerial association is led by laity like Pam Cook. Cook is the secretary at the First Church of God in Dewey, where she has worked for three decades. She said she’s encouraged that residents don’t need to answer an abundance of questions to get the food they need.

“It’s so hard for people to go and ask for assistance. I know there are those who are abusive of assistance, but there are so many people in need, and it’s hard for them to ask,” Cook said. “I’m encouraged that we’re able to just show that we have this, and we’re not going to ask you 10 million questions. We know you’re in need or you wouldn’t be asking for help.”

Like Gilliland, Cook has been in a position to need assistance with food.

“Unless you’ve been in that position, it’s hard to understand what that person is going through. It’s just hard,” Cook said. “You know you need help and that your family needs help, but it’s hard to ask for help, because when you ask, people are looking down on you, and that’s the worst thing we can do to anyone.”

Rev. Monte Brunner, pastor at the First Church of God, said his church supports a county-wide pantry in nearby Bartlesville, but limited access to transportation can make it hard for some Dewey residents to get there.

“Six miles is a long way when you don’t have a car,” Brunner said. “Sometimes the need for hunger is so prevalent that the ability to travel that six miles doesn’t fit into the time frame. We were looking for something a little quicker to access that could meet a need fairly promptly.”

Brunner promotes the pantry in his congregation, which he likens to a supporting role. Because the pantry is led by laity, his role is usually related to sharing information and acting as a cheerleader for the community supported ministry.

“I like the dynamic of what we’re doing here,” Brunner said. “I believe Jinx’s heart, too, that none of us are looking for top bill on this. We’re focused on the need in the community and making sure that need is met.”

“Let it grow and let it be”

The Bread of Life Food Pantry officially opened to the public in June. Barber said the community’s response to the pantry has been positive. The local grocery store gave them permission to set up a donation station, which Gilliland set up. Barber has also discussed creating bags for first responders to have on hand if they encounter persons in need, an idea appreciated by the local police chaplain and officers.

“As some committee members pointed out, there is more to ending hunger, so they want to go further,” Barber said.

Brunner believes the pantry’s donation-only setup will work out because the community takes such pride in the well-being of their city.

“I believe it is working, and I believe it will work, even if it’s not working to its full capacity yet,” Brunner said. “It’s a proud, close-knit community. I think when folks who are proud of their community realize there’s a need, they’ll step up and contribute to folks in need in their community.”

Gilliland said the pantry has not yet had problems getting food donated despite not utilizing a food bank, and she expects the donation station will help keep donations coming in. She said an average of two families utilize the pantry every week, a number she expects to grow as more residents learn about the pantry.

“For the people we’re serving right now, we have plenty. And as we grow, we’ll figure it out,” Gilliland said.

Though Cook doesn’t interact with the pantry on a daily basis, she is hopeful the pantry will have a positive effect on the community.

“It’s very new; really, it just began in the last few months,” Cook said. “I hope that it’s making a good impact, but you’ve got to get the word out for it before it really takes off.”

Gilliland said she has ideas for the future of the pantry. Both she and Cook hope the pantry will grow enough to support a refrigerator or freezer so they can offer fresh or frozen foods.

“I think that any church or anyone who starts a project like a food pantry just has to let it grow and let it be and see where it goes,” Gilliland said. “As with anything else, the more effort you put into it, the more you’ll receive. We’re going to put the effort into it for it to grow as the need develops.” § 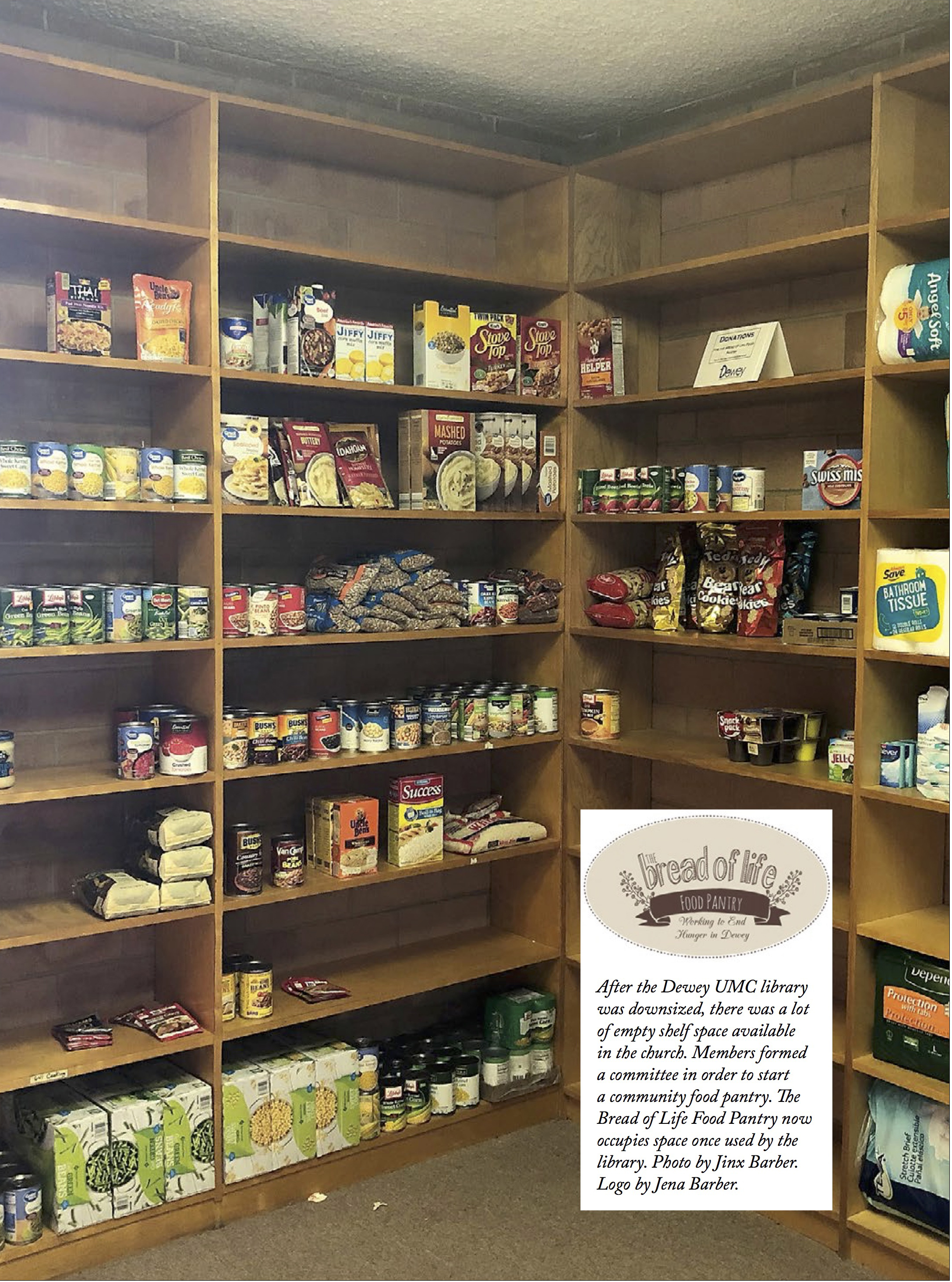