‘I found a community’ — Gloria A., campus ministry intern
By CHRIS SCHUTZ

“God knows best.”
That’s the translation of the Nigerian first name of Tsematosan Gloria Ajinomisanghan, an international intern at the Wesley Foundation, the United Methodist campus ministry at the University of Oklahoma.

Gloria came to Norman to continue her studies in energy law but found out God had a different plan for her.

“When God calls you, it just changes your path,” said the 27-year-old.

Gloria, whose father worked for Chevron Corp. in Nigeria, began her law studies in Nigeria. She applied to continue her education at OU because of Oklahoma’s prominent role in the energy business.

English is not a problem for her, she explained. Nigeria has many tribal languages, but English is that nation’s primary language.

During her first week at OU, she asked another student on campus to help her find her classroom. That person didn’t know but said, “I’m sure we can find it together.” The student turned out to be active at The Wesley.

That was the first step on Gloria’s new path.

Next was visiting The Wesley’s weekly worship, which includes Communion, on a Tuesday night.

“I fell in love with Wesley that day. I found a community,” she said.

More OU students from nations in Africa also have found their way by word-of-mouth to The Wesley for church services and perhaps a meal of African food, Gloria said.

But Daniel Dennison, The Wesley’s director, credits her for initiating a Bible study for them that has grown into a new fellowship group of about 30 people within that campus ministry’s overall outreach. Additionally, The Wesley makes new disciples through other groups such as the flourishing OU Chinese Fellowship, which is led by missionary Fuxia Wang.

In Nigeria, Gloria grew up in a Christian home and went to a Pentecostal church. In her family, you learned “how to pray when you start talking.”

Her high school had a program called Scripture Union, in which leaders talked to the students about Jesus. “That was kind of like a start” for God’s calling on her life, she said. There were Bible studies and quizzes.

In her second year at the university in Nigeria, she realized she needed a deeper relationship with God.

At that college, the chapel and mosque were close together. She attended chapel services, but did not visit the mosque — and recalled another student who was suspended for trying to preach Christianity in the mosque.

Gloria graduated from OU in May 2014 with a master’s in Energy Law.

Then she returned to The Wesley in August of that year, following her call to ministry. As a full-time international ministry assistant, she leads Bible study, fellowship, and prayer groups. She also offers one-on-one discipleship of students to help grow their faith.

The Wesley helped her obtain a Religious Worker Visa, valid until August 2018.

What’s next for her? “I don’t have the full picture,” Gloria said.

She is applying for an online seminary program offered by Asbury Theological Seminary, Wilmore, Ky. She hopes to be a full-time pastor, perhaps in student ministry.

Rev. Dennison is pleased that Gloria plans to go to seminary. “I felt like I saw a lot of ministry gifts” in her, he said.

Students already look to Gloria as a kind of pastor, Dennison said. She goes out on campus, meets strangers, and invites them into the campus ministry’s community.

“She has shepherded several through some difficult times,” he said. 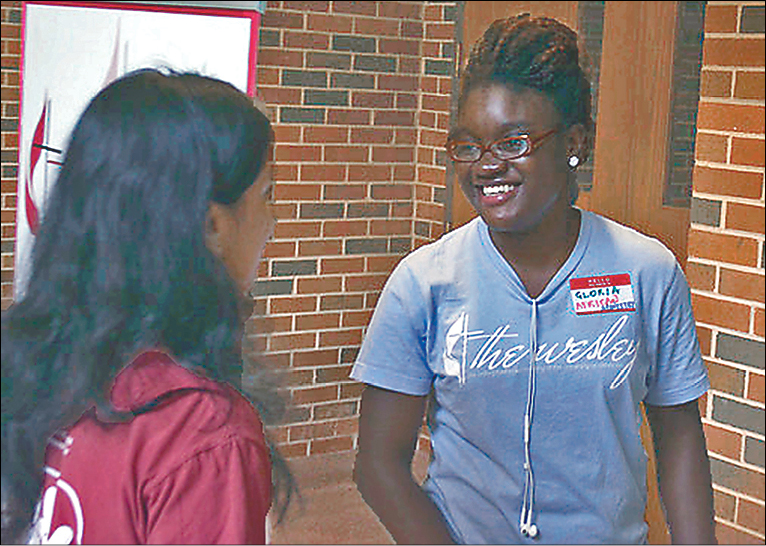 Gloria Ajinomisanghan, right, greets an OU student at The Wesley. 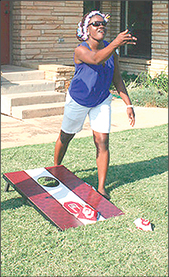 Gloria tosses beanbags for a game outside The Wesley at OU in Norman.