New ministry in Tulsa welcomes all to The Table 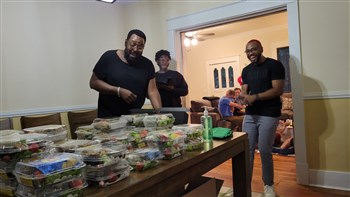 Left to right: Anderson Harrison, Amre Ford, and Rev. Michael Long laugh together during the Oct. 3 launch party for The Table, a new multi-ethnic ministry in Tulsa. Photo by Meagan Ewton.

“I think people were just as excited to be at this launch as I was,” said Michael Long, pastor of The Table. “It’s been a long time coming, or at least it’s felt that way. I think overall people were just excited and just having a good time. Conversations happening, games being played—I think it was a great start to the ministry.”

The Table focuses on four areas: friendship, empowerment, love and discipleship. Services are hosted twice a month at 5 p.m. at Long’s house, which has a long, wooden table with matching bench prominently featured inside. Though the service isn’t restricted to the table, it remains a physical reminder of the desire for connection through community and faith.

“When you come to The Table, we literally believe in the table being the center of everything. We are an old thing becoming new,” Long said. “We take our cue from the Acts 2 church of being community, but also, we find value at the table. Jesus spent lots of time at the table at different parts of his life, lifting up and encouraging people. As Christians, we still get back to the table.”

Rev. Bessie Hamilton, who serves as the associate director of connectional ministry for multi-ethnic initiatives, is excited for the new ministry. She believes it will be an opportunity to reach out to a community and create fellowship based in faith.

“Because of his message and his style of ministry, this church is set up in an authentic way, to really meet people where they are in a small and intimate setting,” Hamilton said. “You really can come just as you are. I don’t believe that’s always the case for so many of those churches that have that ‘Welcome, come as you are’ slogan, but you don’t feel that love and warmth. I think it provides this new opportunity, this new way of doing church.”

Hamilton also believes it’s important for the United Methodist Church to reach out to the black community in an organized way considering the Methodist history during the Tulsa Race Massacre. She said Long’s heart is with the Tulsa community and its history. 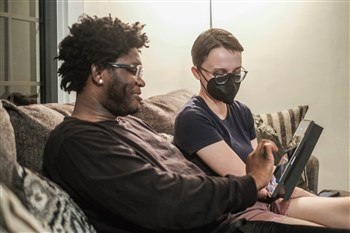 Amre Ford and Hannah Phillips talk together at The Table. Photo by Ethan Phillips.

“When we think about that area, we don’t have any African American United Methodist churches there,” Hamilton said. “I think it’s necessary for those ministries to be there as African American churches, especially based on the history of the involvement of the complacency or the behavior of Methodist churches during the race massacre. We were either part of it or complacent in some way. So, to bring the black church back into that community says we see you, and we’re trying to mend the fences in some way.”

Long has been working to become a part of the community for two years. He rented the house himself a year ago, and he has since joined the local neighborhood association board to get to know the community even better. He said the last few months have become a highlight of the church planting process as things came together for the launch.

“I was surprised to see it come together so quickly, but I think that’s what happens when you’re in the will of God,” Long said. “Once I knew the Lord had called me to do what I was doing the way I was doing it, it began to flow. That was a surprise – how smooth it ran once we honed in on how God was calling us to do this church.”

When asked how people could support the new church plant, Hamilton said prayer and financial assistance were important, but so was physical presence and sharing about the ministry with others in the Tulsa area.

“It’s every other week at 5 o’clock; I know most folks who are out of church at that time,” Hamilton said. “That’s the most important thing – having people involved in the ministry. Being connected, sending folks… to continue to support and encourage him. Come, be in attendance, and offer words of prayer.” 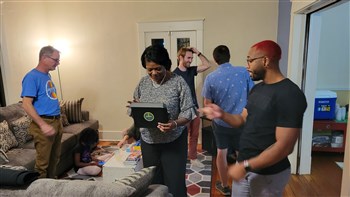 “We need support and resources, whether that’s finances or time, connections or bridge building; I think that goes a long way,” Long said. “resources, time, prayers, I would say that’s’ how you can support the table. Show up be part of the community – we have a seat with your name on it.”

Long encourages existing churches and new church starts to take risks with their ministries. To him, stepping out in faith means trusting God’s direction despite fears about doing something in a new way.

“It’s okay. Step into the unknown,” Long said. “Something great may come out of it, even in a community you may not have expected.”