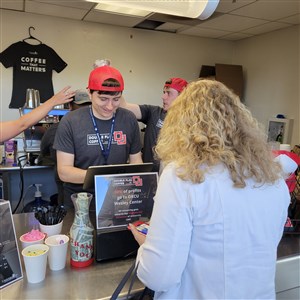 Rev. Matt Patrick takes an order while Rev. Matt Austin works to complete an order during the 2022 Annual Conference. The two co-pastor Tulsa-University UMC and are exploring means of alternate funding for the church. Since their appointment in 2020, the church has started two businesses: the Propel Business and Event Center and Double Flag Coffee Company (shown). The funds generated by the businesses have helped the church explore new ministry options. Photo by Meagan Ewton.

Tulsa-University has established two ministries that focus on alternate methods of funding the mission of the church.

“It has been a night and day difference since before we got here,” Austin said. “This church has gone from a church that was struggling to a church that’s fulfilling its mission every single day. Yes, at first it was a little bit of a struggle that some of these Sunday school rooms were going to have a different purpose, but the difference is good, and we’ve seen new life in the congregation.”

The two were appointed to Tulsa-University in 2020 and soon started working with the church to explore new funding options. The office space is fully rented. The coffee company, which ran a concession stand during the 2022 Annual Conference, is building a clientele for its official launch in August.

“We’ve cut the budget deficit by 80 percent; the church is close to stability for the first time in a long time,” Patrick said. “It allowed to let the church explore new ministry options, and it’s given the church hope to do new ministry in the community.”

Patrick and Austin became interested in alternate funding when they heard Mark DeYmaz speak. DeYmaz founded the Mosaic Church of Central Arkansas, a leading congregation in multiethnic and economic diversity. The church is supported by several businesses in a shopping center, and the church rents out the space to pay not only for the property but also to fund the mission of the church in the community.

Members of the Oklahoma Conference visited Mosaic and toured its businesses in 2018 during an event focused on multiethnic ministry. The co-pastors said they were turned down the first time they presented the idea of alternative funding to the conference. When asked why the conference was now exploring alternate methods of funding, the co-pastors said two factors were at play: timing and necessity.

“I do think desperation breeds innovation, and I think covid fastened our decline by about a decade,” Patrick said. “When you run out of options, you start to explore strategy shifts.”

“One of the advantages that Matt and I have is that we’re a team; we’re able to get a lot done at a quicker pace,” Patrick said. “The second is that the DNA of this church is right for the ministry. This church has always been doing something different. We got to this church when the church was willing and ready, I think it was just the perfect combination.”

Both Austin and Patrick believe an alternate income model will work well not only for individual churches, but also for the United Methodist Church as a whole.

“The UMC specifically is set up for this because the church has a lot of property, and we can’t support it all,” Patrick said. “We’re calling on the conference to do this 21st century work.”

The co-pastors are exploring options of how to use the surplus of funds the businesses will soon create. They believe the best thing to do is to fund work outside of the church. They believe it is the best way to connect with the community.

“I think there’s this big temptation to program up, and while we’ll do some of that, we must focus on giving back to the community,” Patrick said. “One of the challenges of the modern church is a public relations crisis: people think the church doesn’t care. We have to change perceptions and not use all that money on ourselves, but to spend it on what other people are doing. That’s the first step in modern evangelism.”

Austin agrees. He said their efforts so far have invigorated the church both with new ministry and with new visitors and members.

“They used to say if you build a building, people will come. That’s no longer true. We decided to say fill the building and the people will come, and they have,” Austin said. “It’s been a fantastic way to build relationships among the community. It’s what a church should be doing anyway.”