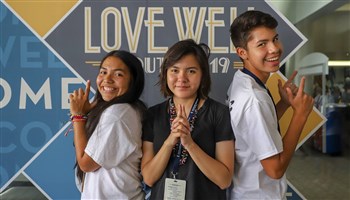 A group of Native American young people from the Oklahoma Indian Missionary Conference raised their voices about Native-themed mascots and other issues important to their communities during the Youth 2019 national gathering.

The quadrennial national event, sponsored by United Methodist Discipleship Ministries, was held in Kansas City, Missouri. Since the city is home of the Kansas City Chiefs football team, leaders from the Oklahoma Indian Missionary Conference and other Native American communities worked with Youth 2019 planners to create a space to discuss the use of harmful Native mascots and other critical issues.

“We wanted to leverage the gathering in Kansas City to shine a light on pressing Native issues and to create awareness on how young United Methodists can be our ally and support our Native young people,” said the Rev. David Wilson, Oklahoma Indian Missionary Conference superintendent.

He said until 2012, the denomination’s Book of Resolutions included language that discouraged hosting events in cities with Native American mascots. A new resolution adopted in 2016 did not include the same text.

Three Native youth were selected for a panel on the mascot issue, preserving Native languages and the sacredness of water. The panel was offered four times throughout the July 10-13 event.

Alyssa Underwood, 16, a member of the Comanche Nation and a junior at Classen High School of Advanced Studies in Oklahoma City, shared a video she helped produce that explores how racist mascots and stereotypes affected her as a Native youth.

“You put me in a box to contain me, to absolve your guilt,” Underwood said on the “Know My Truth” video, which has more than 25,000 views through social media. “I am not a character; I am not a mascot. I am human. I have infinite value and worth.”

Read the full story at UMNews.org.