Moving into the next 100 years of history 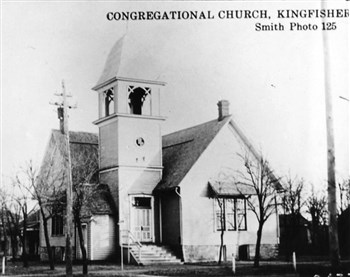 Kingfisher UMC worshipped in the Congregational Church building before their current location was built in 1917.

Kingfisher United Methodist Church has been a family church for more than 100 years. It’s the kind of church where parents have witnessed their children get married in the place where they once took their own vows, seen their grandchildren get baptized in the same sanctuary they did, and watched their great-grandchildren play where they used to play. It’s the kind of church where the building becomes part of the skyline, a landmark for locals and passers-by alike.

It’s also a church that needs a new building.

In 1889, the year of the Oklahoma Land Rush, Kingfisher UMC held its very first service in a tent that had been used as a prize-fighting venue the previous night. At least, that’s how the history was passed on to the current pastor, Patrick McPherson.

He said the congregation worshipped in multiple locations over the next 28 years before starting construction on the current building in 1917. The first service was held on Easter Sunday in 1918, making 2018 the building’s 100-year anniversary.

In part because of the church’s longevity, McPherson said the decision to build a new building has been a hard process, even for those in favor of the move.

“It’s very much a generational church in many ways,” he said. “We’re talking about people whose families were born, baptized, and even buried there. It’s been an emotional journey for everybody.”

Steeped in history, the building is starting to show its age. The altar area that was built for a small choir crowds the worship band on Sunday mornings. When the elevator breaks down, 20-30 people are unable to access the sanctuary for worship. Maintenance, upkeep and utilities cost tens of thousands of dollars every year. There is little multi-functional space. Physical accessibility is difficult, and to bring the building up to code would cost more than a million dollars.

“Due to the building’s age, accessibility is not expected by the city, but it’s expected by Christ,” McPherson said. “You can’t talk about being welcoming and then have certain parts that are not accessible to some people.”

In addition to accessibility, the new building will be filled with multi-functional space. Every classroom will be used for more than one purpose.

“They see ministry as more than just the building,” he said. “They realize the ministry needs to continue on into the next 100 years of history.”

Kingfisher UMC voted 89-17 in favor of moving from its current location at the corner of HWY 33 and HWY 81 to a 12.5-acre plot just south of the high school. The capital campaign started in October 2015. The youngest donor is seven.

McPherson said he’s seen God’s influence at work among the givers, not for the amount being given, but for the people who are giving.

“Some of the people who have been opposed to the move have also been faithful givers toward the building fund,” he said. “They’re faithful, even though they don’t want to move. It shows they really believe in their church. The congregation made this decision, and they’re going to stick with their church.”

Some of those who were opposed to the move were asked to be on the building committee to ensure concerns were addressed during the moving process. McPherson credits the close relationships among the members for the church’s ability to move forward in the midst of strong disagreements.

“They’ve all stayed friends. They’ve butted heads, but they come together again,” he said. “That’s what it means to be the church. If we weren’t a family church it would be easier to walk away.”

Though the process has been difficult, the coming move has created an air of expectancy in the church, especially among the children. McPherson said the kids are looking forward to moving into the new space.

“It’s very much a family church, and I’m not sure we could do this if it hadn’t been,” McPherson said. “People can look and see their children and grandchildren continue on.”

McPherson encouraged churches who are facing similar decisions to have patience with folks who have a hard time with the idea of moving to a new building. Though it’s a painful process, he said it’s important to always respond with love.

“Realize that your history is not in the building, but in your people and the relationships you’ve built,” McPherson said. “Have a vision and have hope. Letting go of your building doesn’t mean you’re letting go of Christ. Your ministry is not dying; it is continuing because of your faithfulness.”

Kingfisher UMC has been a family church for more than 100 years. With a new building and a strong bond, they hope to make it 100 years more.