Monastics in the Heartland 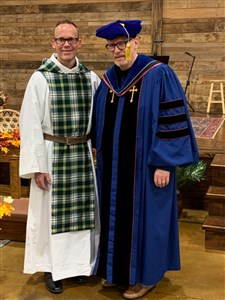 Scraper, an elder in the Oklahoma Conference, leads the Order of St. Patrick, a secularly cloistered monastic order for clergy and lay contemplatives. The order is not a United Methodist caucus, a church plant or a parachurch organization. Instead, the order is a way for like-minded believers to commit themselves to a life of contemplation, service and spiritual formation.

“The fact that we’re not a political caucus within the church is one reason I think we’ve been able to develop some meaningful relationships within the church,” Scraper said. “We’re just trying to create space for people who have a shared calling to live out that calling together, separately.”

Scraper leads the order with his father, Rev. Randy Scraper, a retired United Methodist elder. The older Scraper started the Order of St. John, the predecessor of the Order of St. Patrick, in 1979 in order to meet a need for connection among clergy.

“With everything our denomination is going through right now, especially with everything that’s happened in 2020, we felt it was important for clergy to connect and find a way to have meaningful relationships with others,” Matt Scraper said. “It’s a work in progress, and we’re doing what we can to establish those relationships, even among great distances.”

Monastic fellowship was a familiar concept to the younger Scraper as he saw the positive impact the Order of St. John had on his father. Randy would sit with his son on the porch and help guide him through the process of getting to know God better, letting Matt lead the conversation.

“That was formative to me because I had the opportunity to experience that with dad,” Matt Scraper said. “As a result of that, he would kind of guide me toward knowing God better and knowing God for myself, but also know what my sense of call was for myself and that was incredibly meaningful for me.”

The Order of St. John was relaunched in 2015 as the Order of St. Patrick. One reason for the shift was the emphasis on secularly cloistered life, a phrase that essentially means living in the world in families, not in a monastery.

“Most monasteries or convents find their monastics withdrawing from the world and living together in a monastery, but St. Patrick took his monastic communities and they lived with people not to convert, but to share the love of Christ with no expectation,” Scraper said. “As a result, it was the most successful evangelistic ministry in Christian history.” 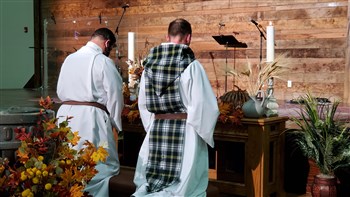 Rev. Travis Ewton (left) kneels next to Rev. Matt Scraper during the Order of St. Patrick's Allhallowtide retreat held Nov. 5-7. Novitiate members who had completed at least one year of discernment and training were invited to take vows to become official members of the order. Those who were not ready to take vows were invited to continue the discernment process for another year.

Rev. Judy Conner, a retired local pastor in the Oklahoma Conference, learned about Celtic theological practices years before she learned about the Order of St. Patrick. She felt the practices described in “The Celtic Way of Evangelism” by George G. Hunter III lined up with her theology, and the Celtic prayers and liturgy felt organic and life-giving to her. When she first applied and spoke with Scraper, the ethic of the order piqued her interest. She saw the parallels between the Celtic Christianity St. Patrick lived by and the order’s rule of life.

“You live where you are, you love where you are, you get to know people, and by your life, you become that light in the darkness,” Conner said. “For the first time, I felt like I was free to truly live into a place where God had in my heart, and it was really life-giving for me.”

Because of the pandemic, novitiates were not able to gather in person until the annual Allhallowtide retreat in November. Even without having met in person before the retreat, Conner was surprised to find the closeness between those gathered was like meeting old friends. She said the fellowship was encouraging and strengthening.

“It was a type of community, that spiritual community, that I think is very rare these days,” Conner said. “It helps you to know that you’re not alone; being a contemplative in our world now is very different, and it’s nice to have like-minded people that focus on God and living your life out, with and through God.”

Rev. Mark Polson, who pastors Idabel UMC, said monasticism has fascinated him for a long time, but it wasn’t until the world’s circumstances changed this year that he remembered reading about the Order of St. Patrick on Facebook. Because of his family and pastoral role, he didn’t feel like a monastic life was possible.

“I was really looking for something to refocus, ground, refocus my spiritual journey, and it seemed like an appropriate time to do so, to learn more about it,” Polson said. “I was excited to see the unique structure of the OSP to be secularly cloistered, to be at home but still be under the monastic roof through the rule.”

Despite not being able to gather regularly in person due to the pandemic, Polson said the online community that’s been built is like “a place to be a family together.”

“You’re kind of allowed to enter into the community as much as you need or want,” Polson said. “There’s a lot of different ways to engage as many people as possible to create order, and we’re creating space for them to be in community with one another.”

Scraper said the opportunity to build meaningful relationship with one another has surpassed what anyone expected.

“I think more than anything, that’s the need that’s being met: real, genuine fellowship,” Scraper said. “There’s been more than one person in our fellowship – 38 so far in total – that said this is what they were expecting out of fellowship in their local church. That’s great; let’s take that into the local church and be an example of that kind of faith.”

Polson was asked to be the dean of the novitiate experience, a task that involves creating and maintaining community spaces for those trying to discern whether they’re being called into the monastic life, and if so, whether they’re being called to Order of St. Patrick. He said he was surprised both in how much he’s grown in his faith journey and that he was asked to move into a leadership position sooner than he expected.

“Some of these gifts that I’m becoming to recognize in myself were obvious to others,” Polson said. “I wasn’t expecting to follow in love with the order, the processes and the community as quickly as I did.”

Conner was also asked to fill a leadership position in the order. She is the covenantal priory and will work with those who took orders this year to prepare them to be anam caras, or soul friends, to new novitiates.

“I will be teaching them about spiritual direction, how to be contemplative themselves, and how to have that active spiritual growth in their own life,” Conner said. “You cannot teach someone something if you do not have it in your own life. You cannot give away wat you don’t have.”

Leading spiritual formation efforts is a call that Conner has felt on her life since college. She said she feels compassion for pastors who have had their spirits broken in the course of their ministry.

“I believe that the Order of St. Patrick is the open door that God’s been preparing me for my whole life,” Conner said. “I’m able to do what God gave in my dream to me years ago. I’m working as spiritual director with the pastors and lay people that are in the order, and it’s been phenomenal.” 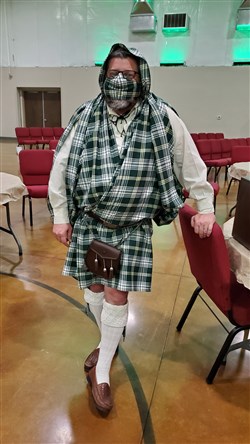 Rev. Mark Polson wears a great kilt made with the tartan of St. Patrick.. Polson, who took vows at the Allhallowtide retreat held from Nov. 5-7, now serves as the dean of the novitiate experience.

Conner said the intentional commitment contemplative spiritual practices changes the way a believer interacts with the world. She believes the practices lead to living out faith with consistent action.

“It's not just sitting around a home praying and reading scriptures, it’s very active,” Conner said. “You get into a rhythm and your mind, your spirit, and your body seem to be in rhythm with the heartbeat of God. When you read the scriptures, you hear them differently and deeper. When you hear someone talking, you hear them deeper. Sometimes you can hear between the lines and hear what’s not said, and I think that’s what makes the difference.”

Polson believes the monastic life isn’t for everyone, but thinks the benefits of engaging faith in a monastic community can be tremendous.

“It should never be a burden or if it’s not life giving for you, then it’s probably not something you’re being called into,” Polson said. “While the journey is still difficult, there’s comfort knowing there’s others who have journeyed this path before us. That’s what I like about the monastic life – it’s not new, it’s living the life in ta modern setting.”

Scraper said that the order is open to helping people explore whether they have a monastic call on their life. He understands that it’s not for everyone, referring to the different calls on people’s lives as “the diverse ways we are all called by the Holy Spirit.”

“I believe in my study of scripture that Christ loves unconditionally, proactively and sacrificially,” Scraper said. “I believe we can spend a lifetime trying to do that, and it wouldn’t be a wasted life. That’s what I hope we can do.”

For more information on the Order of St. Patrick, visit https://patricianorder.org.
Making Disciples of Jesus Christ for the Transformation of the World