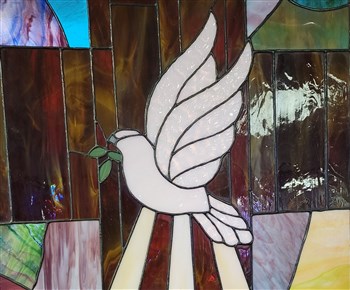 The Minority Local Church Concerns team is creating a new series that they hope will bring attention to traditional and sometimes foundational practices that either started with or perpetuate systemic racism.

“Shattering the Stained Glass Window” is an initiative led by Rev. Bessie Hamilton, associate director of connectional ministries for multi-ethnic initiatives. Revs. Jennifer Logsdon-Kellogg and Michael Long, who help chair the MLCC, are also helping with the initiative.

“The purpose of the series is to bring attention to the fact that not only do we need to acknowledge and address systemic justice…but also that we need to take a hard look at how the structure of our denomination and even our conference has depended on some symptoms that prioritize white people over non-white people,” said Logsdon-Kellogg, who will be appointed to Bridgeview as of July 1. “The shattering refers to the things in the foundation of our conference that are not healthy, and rather than pretty them up, we need to dig those things up and actually repair them.”

“I think when we look at the overview, we see the conference is doing great, but if we pull back the layers – as a person of color clergy – it’s not so great,” Long said. “It’s shedding light on a lot of these issues that we would normally think it’s fine because no one is saying it out loud, but these are the things we’ve seen in our own conference. If we really want to be a conference of diversity and inclusion, we need to talk about some of these things.”

Long recognized that it can be difficult for white congregations to begin an in-depth conversation about race. He hopes that the Shattering the Stained Glass Window series will help start some of those conversations. Logsdon-Kellogg said the series about dismantling racism is long-term and ongoing work.

“Our aim is to equip pastors to open conversations in their congregations about race and the foundations of racism in structures and systems in a way that will not be divisive, but that will encourage curiosity and truth-telling and ongoing education,” Logsdon-Kellogg said.

Long and Logsdon-Kellogg agree that it’s necessary for both individuals and congregations to start their own research regarding systemic racism before asking for help in trying to address it.

“I’m willing to talk with anyone one on one or with a group, but it takes that person doing their initial research,” Long said. “This is very interactive. You have to do the work, and that’s what makes it so challenging. It makes you face some of your own personal biases that you might have… That’s why we say you do the work first, then we can help later.”

One of the first action steps that Logsdon-Kellogg recommends for churches who want to start the work is developing relationships with local congregations of color, even if it’s not a United Methodist congregation. She said partnering in work that congregation is already doing and following their lead, not taking over, can help a person learn a lot about themselves and their church home.

“We should not make assumptions about the experience of other people, but rather, get curious and ask about the perspectives and experiences of other people and learn from people who are different from ourselves,” Logsdon-Kellogg said.

She believes that the conversation about systemic racism that the series will start is important enough to have with all ages of people, including young children. Long agrees, saying the younger generation is more diverse and more inclusive than any other before. He believes everyone will find a place in the series.

Long wants to emphasize that the Christian faith is centered on a liberating Jesus. Logsdon-Kellogg wants to ensure people know that the series is not about getting things “right,” and it takes courage to have conversations about race and privilege.

“I feel what culls a lot of white people up is we don’t want to mess up or hurt someone’s feelings. We don’t want to hurt anyone or expose ourselves as learning less than we thought we did,” Logsdon-Kellogg said. It’s an ongoing opportunity to learn about our past and about our implicit biases and to figure out how we can be a more inclusive church and work toward justice because that’s what Christ modeled and calls us to do.”