Down in Canyon Camp, chainsaws roared as 22 United Methodist volunteers from Missouri cleared hundreds of broken trees during a week in January.

After two damaging ice storms, "we were hoping for and praying for help. I definitely think it’s a God thing that they’re here."

DIRT, the Disaster Response Team from Liberty (Missouri) United Methodist Church, is led by Kevin Fisher. It’s his primary job at the church.

Established about a dozen years ago, the group is fully equipped for disaster recovery work.

The team has a bucket truck, a skid-steer loader with a grapple, and more than 20 chainsaws.

"We can do an awful lot of work in a short amount of time," Fisher said.

At Canyon they removed the dangling tops and splintered branches of 300-400 trees, he estimated.

More than 100 other trees were so badly damaged they "weren’t going to make it," and those were cut down.

Big brush piles took shape alongside the main camp road, to be hauled away later by other volunteers.

"We have plenty of wood to haul. Any help we can get will be much appreciated," Combs said. "We welcome any group — for a day, overnight, five days or 50 — to help us get to this before spring rolls around."

He said the Missouri DIRT volunteers "are doing a great favor to us. It’s important to have a safe environment; that’s primary" in Camps ministry.

Canyon staff prepared meals for the team, and the volunteers stayed on site.

They did not tackle the large, uprooted tree that crushed Cabin 9. The cabin was deemed a total loss. Both tree and building will be removed in future as one big project, after decisions by the Camps Board of Trustees and Canyon’s site board, Combs said.

The DIRT Team has served in Oklahoma "six or seven times" since it formed, Fisher said, including in Altus and two central Oklahoma missions in 2015.

Ten people from Liberty UMC and 12 other Missouri United Methodists worked at Canyon.

They are self-contained, to especially help with early response after a disaster, including securing roof tarps. They volunteered after Hurricanes Katrina and Sandy and in Colorado. They spent several months in Joplin, Mo., after a tornado there.

In total, the men and women have traveled to more than 70 disaster sites, Fisher said.

They deploy about a half-dozen times each year. "A good number" are retired; some take vacation from jobs. When they’re not traveling, a core group volunteers in Liberty every week, building wheelchair ramps and roofing homes. 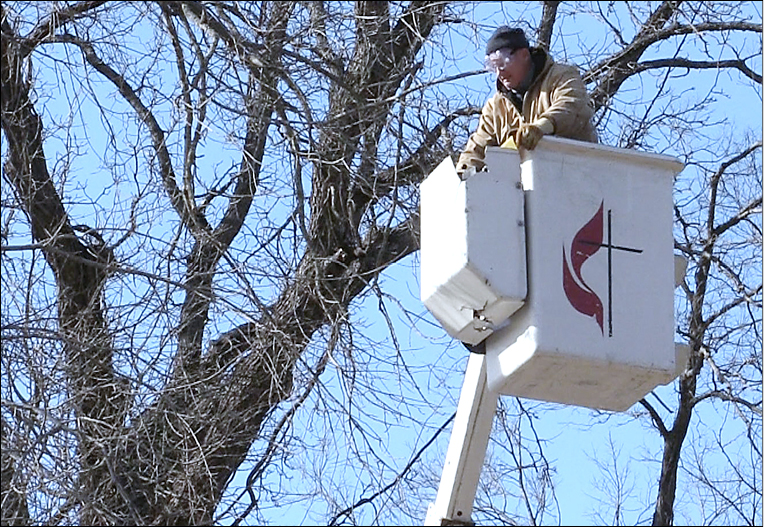 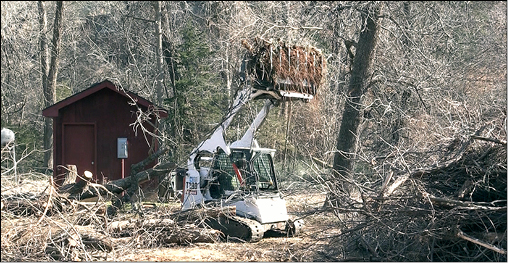 Above, a DIRT bucket truck lifts a volunteer to trim some of the highest limbs on a tree while piles of cut branches grow larger beside the main road in Canyon Camp. 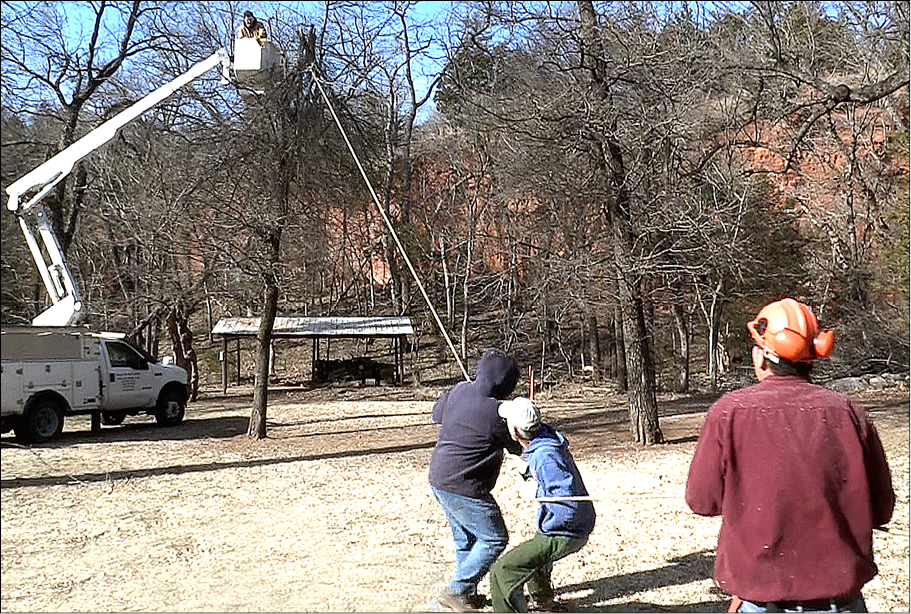 TUG-OF-WAR — Disaster response volunteers put their muscle into making Canyon Camp safe for its guests after two ice storms. They are part of a 22-member Missouri United Methodist team, and the January project wasn’t their first one in Oklahoma. Help also still is needed to repair homes damaged in the state’s central region. Learn how you can become involved at www.okumc-dr.org.