The Fourth of July was a special one for Fuxia Wang, a missionary and the international director at the Wesley Foundation at the University of Oklahoma in Norman.

After 20 years in the United States, this was Rev. Wang’s first Independence Day as a U.S. citizen.

Eleven days earlier, the native of China had recited the Pledge of Allegiance, waved a small flag, and taken the oath that concluded a years-long journey to becoming a citizen.

For her, the moment signified a new kind of independence — a guarantee that she can preach and worship the Lord.

"You cannot do what I’m doing here in China, publicly," she said. She wants people to appreciate that the United States is blessed.

In 2014, Wang applied for the citizenship exam. She took the test Feb. 28, 2016, and was notified the same day that she passed. She later received word that she would take the citizenship oath on June 24.

Her journey from China to United Methodist ministry in Oklahoma and now U.S. citizenship started when she taught English as a second language in China.

She decided to come to the United States to get a degree to teach that subject. She researched U.S. colleges, sure of one thing: she wanted to study someplace warm.

It took her 1½ years in China to prepare for the Graduate Entrance Exam and the Test of English as a Foreign Language (TOEFL). She memorized 20,000 words and got approval from a college in China and the Chinese government’s Bureau of Higher Education.

Then she traveled to the University of Central Oklahoma in Edmond.

A United Methodist campus minister there invited her to a new-student welcoming party at the Wesley Foundation.

"He just changed my life," Wang said. "God brought me here so I would seek Him and find Him."

An invitation to a Chinese-language Bible study followed.

But Wang was an atheist.

"I didn’t have any kind of church experience," she said. That began to change when she went to the Wesley Foundation for a free meal.

Someone said grace before the meal, ending with "Amen." She asked what that word means. The answer: "Go ahead and eat."

Wang learned quickly about United Methodist hospitality. "Where two or three of us gather together, there is food," she said. The way "to everybody’s heart is through the stomach."

She learned that campus ministry at UCO specializes in offering "radical hospitality" to international students, who may not be religious. Radical hospitality is what gets them interested in coming to worship, she said.

For her, a passion for Christianity took hold at UCO. She chose to enroll at the International Theological Seminary in California. Then she returned to Oklahoma and in 2006 was commissioned as a provisional elder of the Oklahoma Conference. She was ordained in 2010.

She was appointed as an associate at the campus ministry in Norman, serving with Wesley Foundation director Daniel Dennison.

Wang became a missionary with the General Board of Global Ministries in 2010. Her Advance number is 3021191.

The Wesley in Norman continues to be her base as she practices UM radical hospitality, especially connecting with students and families from China.

For her, hospitality involves meals that remind the students of home and helping them with getting an apartment, buying groceries, and cellphone services. She assists some who need driver’s licenses and Social Security cards in order to be able to work. She preaches in Chinese and English. 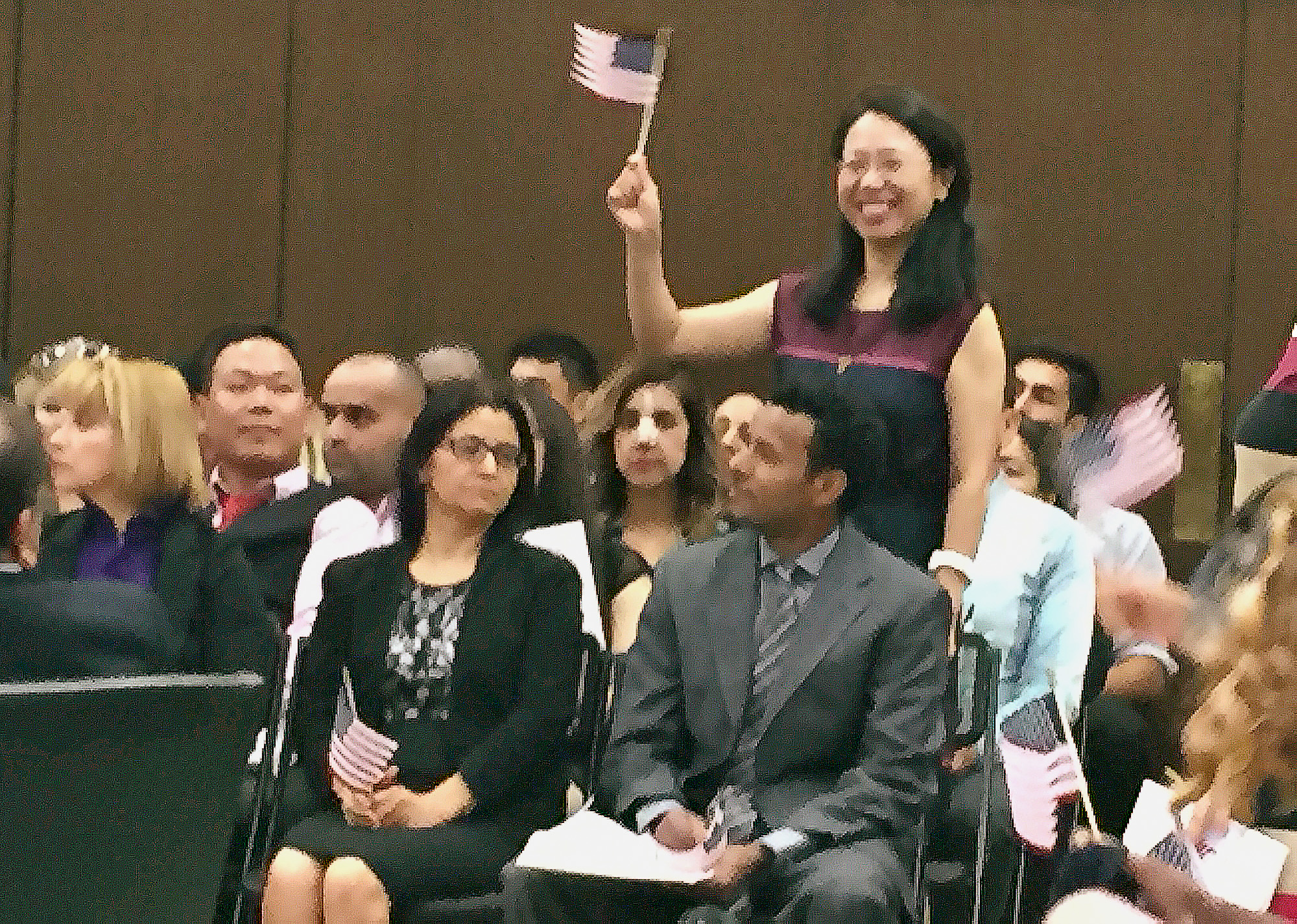 At the Federal Courthouse in Oklahoma City, Fuxia Wang waves a flag June 24, the day she took the oath of U.S. citizenship.
Making Disciples of Jesus Christ for the Transformation of the World