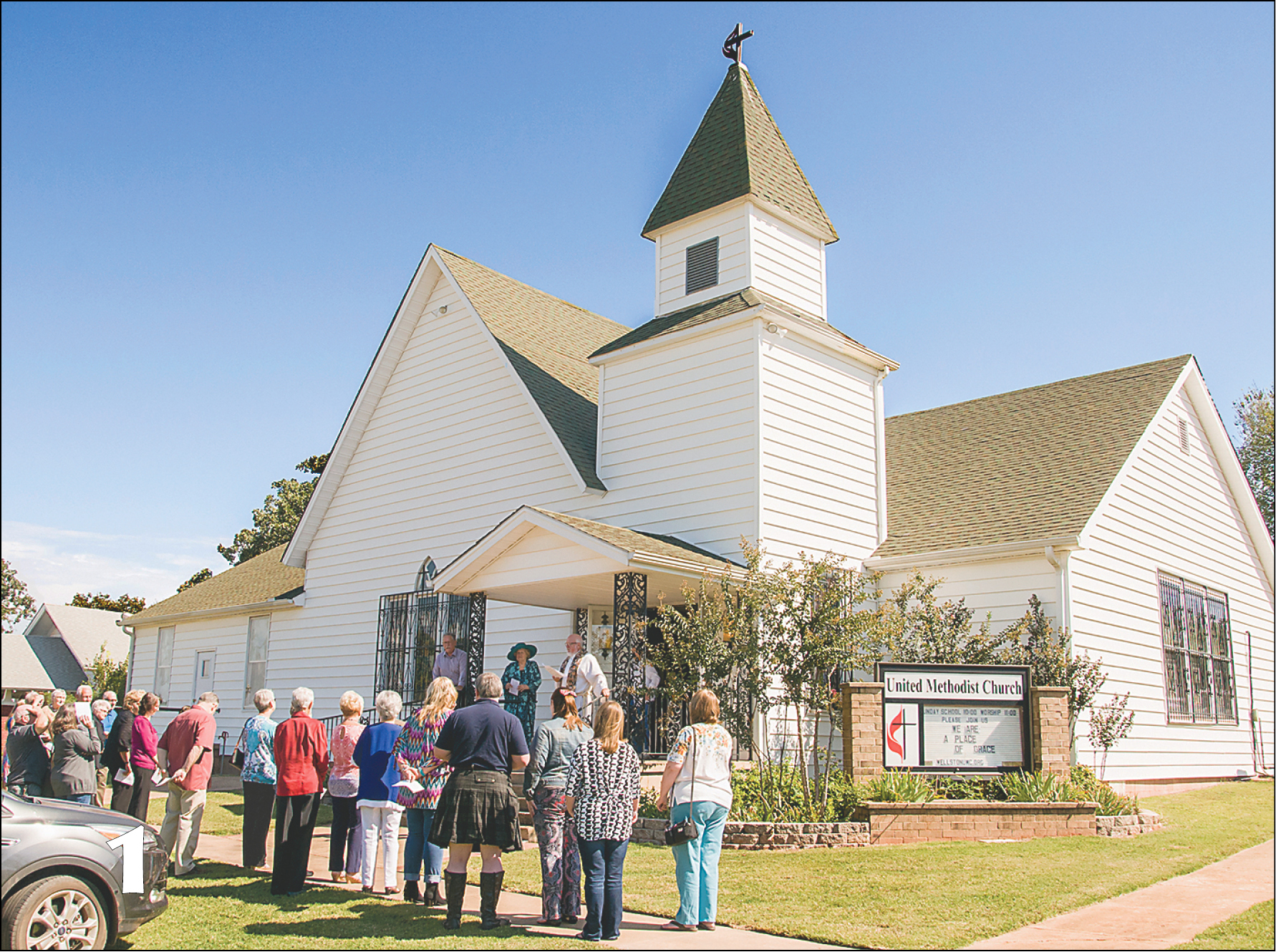 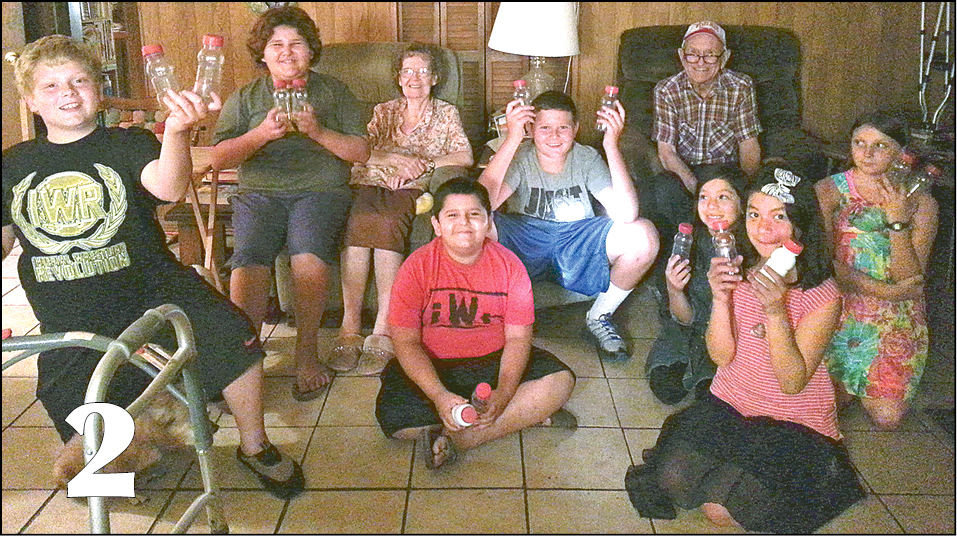 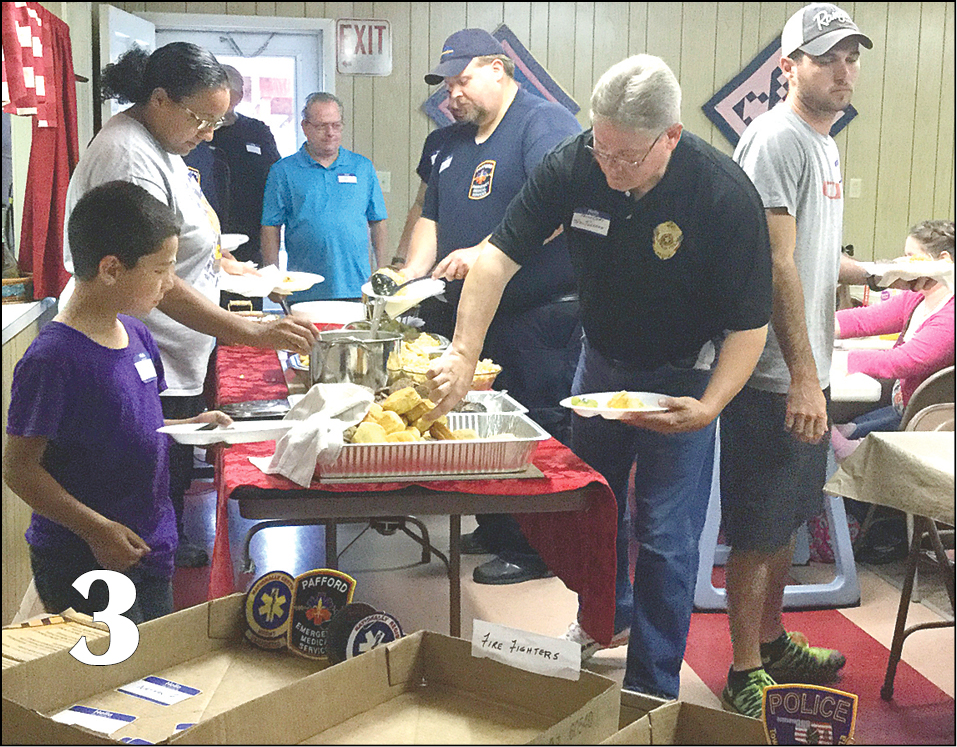 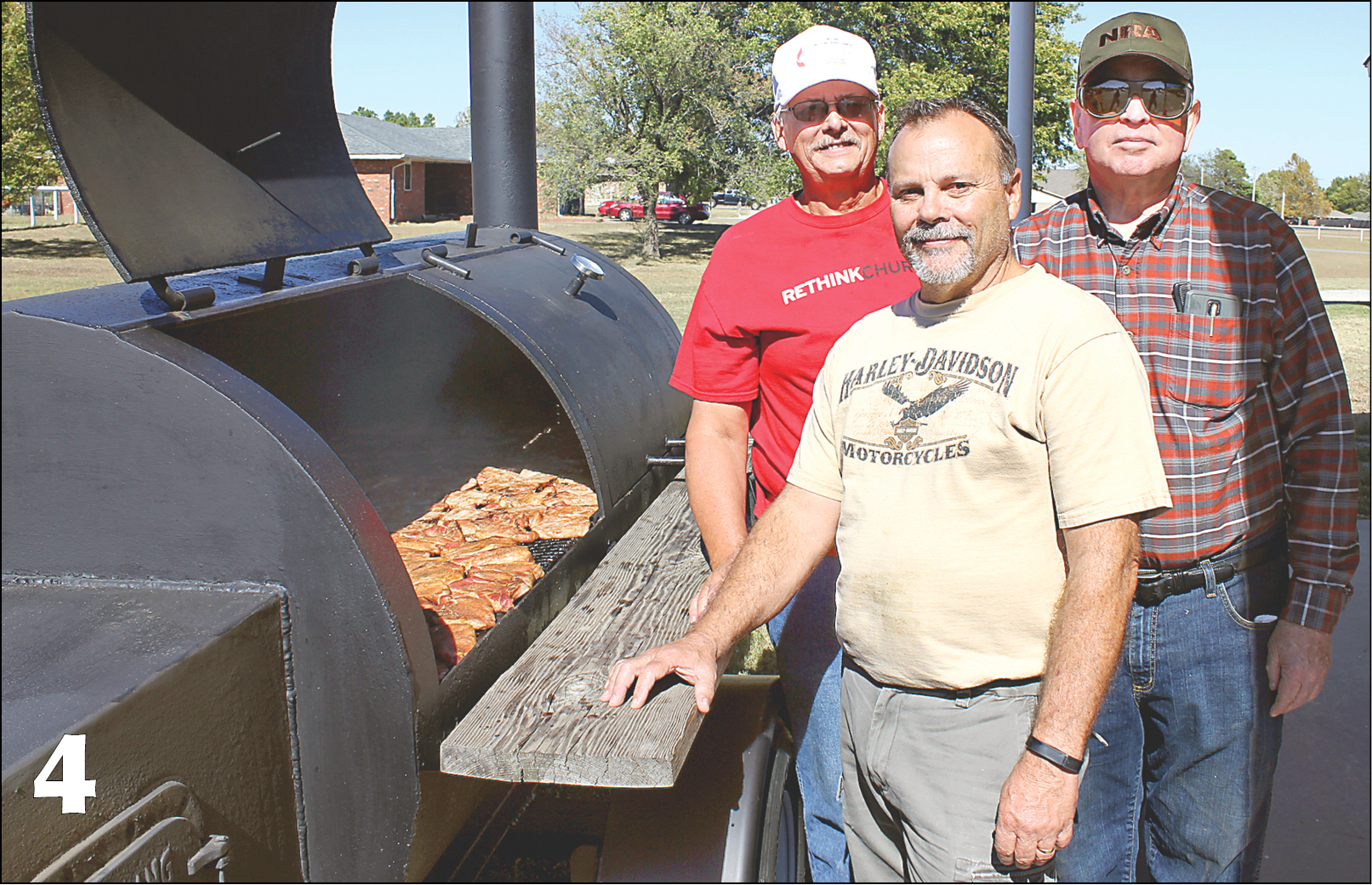 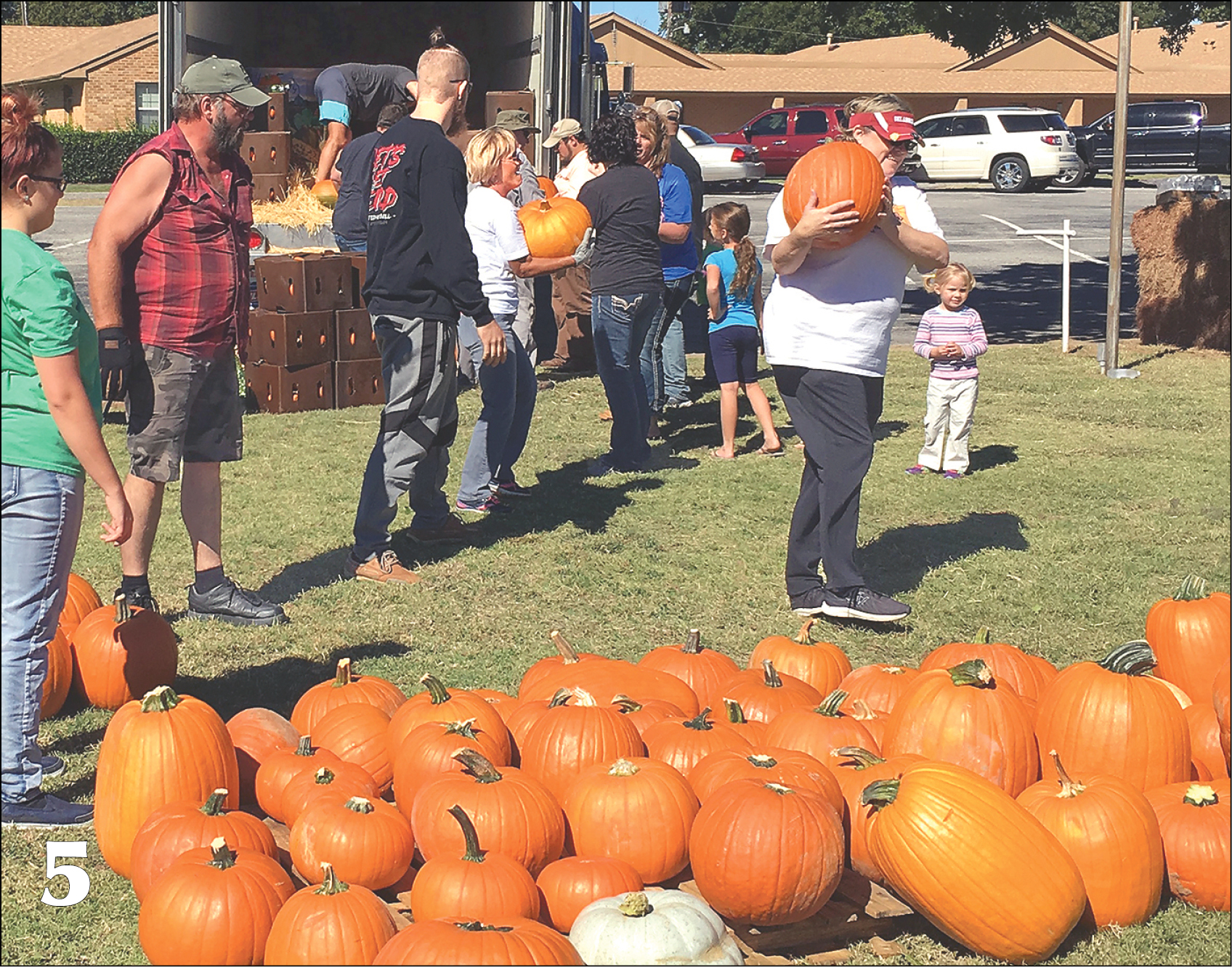 Wellston United Methodist Church is celebrating three improvements to its building, topped off by a custom-made Cross and Flame crafted by a church member.

The congregation gathered Oct. 2 to dedicate the changes, which also include a renovated children’s classroom and an interior ramp to improve accessibility between the sanctuary and fellowship hall, Pastor Paul Calkin said.

The Cross and Flame on the steeple replaced a cross installed about 50 years ago. The symbol was designed and built by member Adam Smith out of recycled materials.

The United Methodist Cross and Flame symbolizes the time when John Wesley, Methodism’s founder, experienced conversion, finding his heart "strangely warmed" during a religious meeting in 1738.

"Today we celebrate that long heritage of hearts strangely warmed, the times when the redemptive power of God’s grace is recognized ...when lives are changed, hearts are opened, and love is made known," Rev. Calkin said at the dedication, which was on World Communion Sunday.

Before the new ramp was built, there was only outside access to the sanctuary and fellowship hall.

"The ramp is here because we take to our hearts the statement that ‘All are welcome here.’ We want no barriers," Calkin said.

He said construction of the ramp led to the third project, renovation of the children’s classroom. A portion of the old classroom was in the way of the proposed ramp.

In the Ritual of Holy Baptism, the church is asked, "Do you as a congregation accept the responsibility of assisting these parents (and sponsors) in fulfillment of the baptismal vows, and do you undertake to provide facilities and opportunities for Christian nurture and fellowship?"

Members of Mannsville UMC are taking inspiration from a couple who found a way to help others even as they deal with their own health problems.

Longtime church members Eddie and Betty Pittman of Ardmore, who have not been able to attend church lately because of illness, came up with the idea of saving their nutritional supplement bottles and giving them to church youth to collect donations for mission.

So far, the youth group has collected over $235 in the bottles. The money, sent to World Vision, has helped buy chickens and goats and provide medical assistance for the poor.

Betty Pittman, who is a cancer patient, took on the job of washing out the bottles.

The couple gives the clean bottles to the youths, so they can ask for donations to fill them. Sometimes, the Pittmans put in some of their own money.

Eddie, who is on dialysis, has been involved over the years with major fund-raising for the church, including the building fund.

"The Pittmans set a wonderful example of what Christian behavior should be," said member Andra Jennings. "They have inspired all of our congregation, and we would like to share their story."

Photo: Seven members of the youth group from Mannsville UMC visit the Pittmans in Ardmore.

The men of Vian UMC recently honored the town’s emergency personnel by treating them to breakfast at the church and giving them copies of the devotional book "Strength for Service to God and Community." President Fred Hamon said, "The Vian United Methodist Men is expressing our appreciation to these first responders, who seldom receive expressions of appreciation for their devoted service." Among those attending were police officers, firefighters, and EMS personnel. The church received a $10,000 grant this year, through the Conference’s New People New Places initiative, for Wednesday evening ministries. The church is growing in this town of 1,466 people, averaging 91 in worship, according to the 2016 Journal. That’s up from 72 the previous year.

At 7 a.m., they carefully placed the first of 800 seasoned, thick-cut pork chops on the grills. Meal service began at 11. Homegrown pickled okra and loaded baked potatoes were among the side dishes.

McLoud’s annual Pork Chop Dinner, a fundraiser, began with the need for a building. "We’ve been doing this so long we’ve forgotten how many years, but we know it’s over 20," declared a Facebook event post.

Harold Scott recalled his wife’s pronouncement decades ago as the congregation discussed how to raise money to build. "My husband can cook pork chops."

He still does. He even made one smoker.

The town anticipates the dinner each fall. People who grew up at McLoud-First and moved away come back, from as far as Ponca City.

"We are looking at ways to be faithful in what we’re doing," said Rev. King.

One week after the Pork Chop Dinner, members prepared and served a free meal of beans and cornbread.

Photo: Watching over the last rack of smoked chops Oct. 22 are, from left, Brad Mauldin, Dean Hill, and Harold Scott.

In the Cinderella fairy tale, a pumpkin turns into a magic coach. Hopes are that a real pumpkin (and many of its companions) will help fund a children’s program at Duncan-St. Paul’s United Methodist Church.

St. Paul’s pumpkin patch, the only one operated this fall by a church in Duncan, has helped remind the community about the church’s presence, said Pastor Andrew Haire.

Proceeds from the pumpkin sales, which ended Oct. 31, went to the church’s Faith Weavers program, a children’s ministry.

The church opened its first-ever pumpkin patch on Oct. 10. About half of the first shipment — 505 pumpkins — had been sold within two weeks, Rev. Haire said.

The pumpkins were supplied by Pumpkins USA, a farm in New Mexico that employs Navajo workers, and the church got to keep a percentage of the proceeds. "There is no upfront cost to the church," Haire said.

The pumpkin patch and festival have "brought up the vitality and excitement of the congregation," Haire said.

About 60 people currently are attending worship, he said. The 2015 Journal reported 36.

The pumpkin patch raised over $5,000 for Faith Weavers, said Haire’s wife Ashley, and several more children have been attending Faith Weavers since the festival.

"We’ve met a lot of new people in the community," she said. — Chris Schutz