Methodism and the Tulsa Race Massacre

Signs at the corner of East Archer Street and North Greenwood Avenue mark the area as a Historic Neighborhood. Photo by Roxanne Roark.

On June 1, 1921, one of the worst riots in United States history took place in Tulsa, Oklahoma. There are several versions of the event that sparked the riot, but most accounts say that on the previous day 19-year-old Dick Rowland, an African-American male shoe-shiner, tripped and fell into 17-year-old Sara Page, an Anglo female elevator operator. She cried out and Rowland was arrested for assault. Within hours of the event, the Tulsa County Sheriff was informed through a phone call that a mob was forming to lynch Rowland that night. He then called the Tulsa Star, an African-American newspaper in Tulsa, who informed the citizens of North Tulsa.

Tulsa was a city segregated by Jim Crowe laws at the time. Despite this, or rather because of it, the African American community of Greenwood in North Tulsa was incredibly prosperous. Because of segregation, money that came into North Tulsa through oil and people who worked in South Tulsa stayed and circulated in the community. Greenwood had its own banks, theatres, stores, and newspaper. The area was known as “Black Wall Street.” 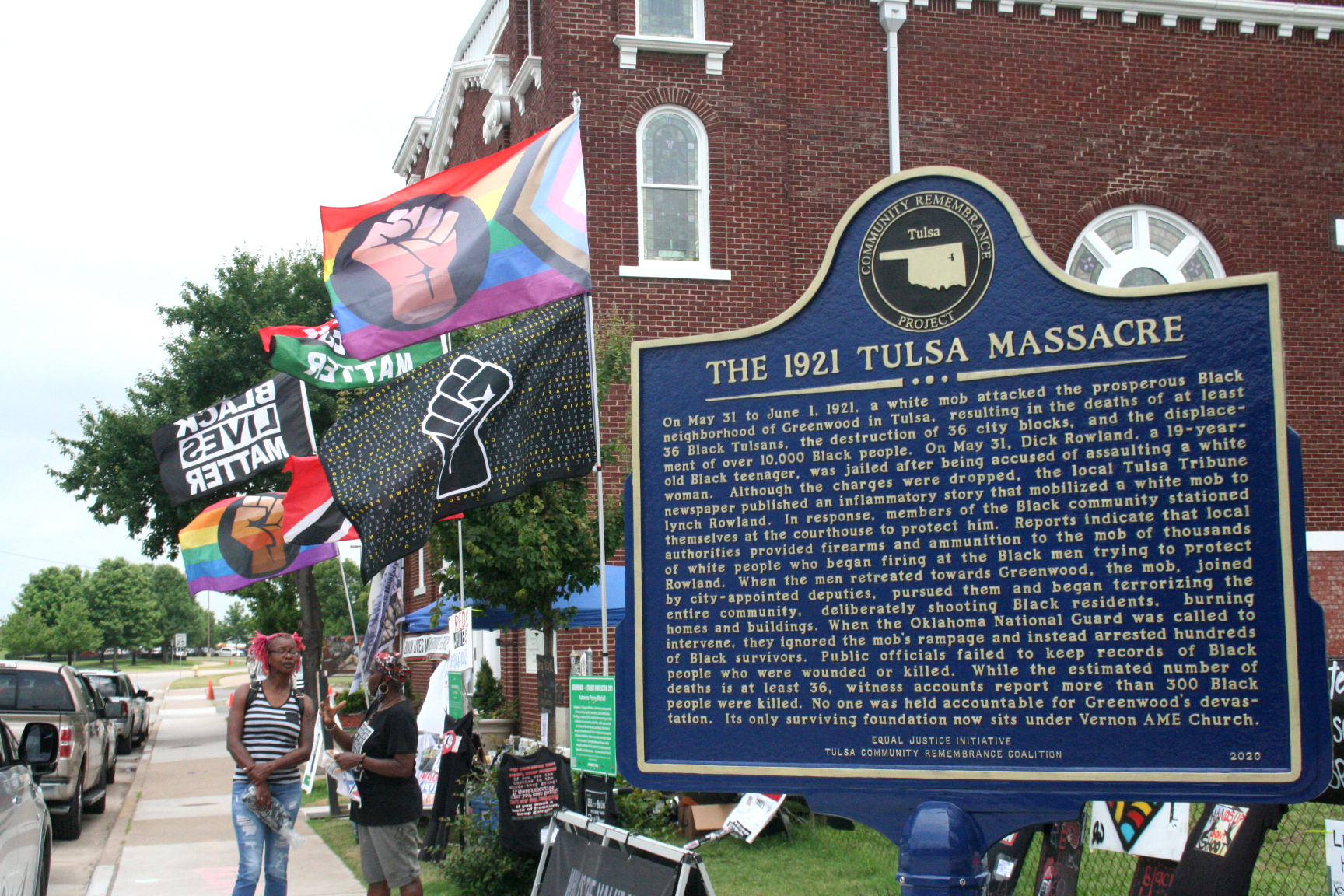 In response to the Sheriff’s call, about 75 armed African American men went to the courthouse in order to prevent the lynch mob from taking Rowland; they were met by a growing white mob. A dispute ensued, during which a shot rang out. As a result, thousands of armed whites invaded the Greenwood District of North Tulsa, burning it to the ground. Reports told of a machine-gun on Standpipe Hill overlooking the Greenwood District firing into the streets and planes dropping firebombs on top of buildings. People were drug from their homes and murdered. When the violence was finally quelled, 100-300 African Americans lay dead and over 1,200 buildings were destroyed. The amount of devastation and loss of life inflicted upon Greenwood by the white mob and the racist connotations of the word “riot” has led many today to refer to the event as a “massacre” rather than a riot.

For the purpose of an “Intersectionality Action Project” in an Ethics in a Violent World course at Phillips Theological Seminary, I began to work on developing a worship service of reconciliation. In the sermon portion of the project, I rhetorically stated that I wondered what was being preached about the Sunday following this horrendous event at Methodist churches near the epicenter of the tragedy. Little did I know, I was soon going to find out.

I went to the Commission Report on the event to fact check one of my statements about the massacre when I ran across “Echoing these sentiments was the testimony of Reverend Harold G. Cooke, the white pastor of Centenary Methodist Church.” This peaked my curiosity and I began to look up information about Methodists in connection with the Tulsa Race Massacre. What I discovered was a disturbing history that I am now going to share, in part.

Methodists and The Race Massacre

Bishop Mouzon was a Methodist Episcopal Church South (MECS) bishop, serving in the Texas and Oklahoma area at the time. On the Sunday after the massacre, Mouzon preached that morning at Centenary MECS and that evening at Boston Avenue MECS. In the sermon he declared that there will be no social equality between blacks and whites as decreed by God and that “The more that (color) line is respected, the better it will be for blacks and whites.” Amid rounds of applause he goes on to blame blacks for starting the riot and holding the city hostage. Mouzon did condemn the mob invasion of Greenwood and suggested measures for improving race relations, but this pales in comparison to the racist rhetoric throughout the sermon. In the following day’s Tulsa World, he was featured in an article where he blamed WEB DuBois for agitating and arming the black citizens of North Tulsa, stating that he was “the most vicious negro[sic] man in the country.” Mouzon’s complicity, however, pales in comparison with Harold Cooke, the pastor of Centenary MECS.

The Commission Report states that in the weeks prior to the massacre, Harold Cooke led an investigation into North Tulsa which was published in the Tulsa Tribune. His accusations of debauchery included, “African American porters rather routinely offered to provide the men with the services of white prostitutes.” In his sermon that following Sunday, he said, “we should let them know, once and for all, in no uncertain terms, that outlaws of their own color and race brought it upon them, else a worse thing than this will happen,” and “Little Africa should never be rebuilt in the heart of this city for many years.” Cooke’s connection to the Massacre doesn’t end here.

In January 1922, the Tulsa Benevolent Association (TBA) was formed as a holding company for the Klu Klux Klan (KKK), the modern form of which was founded by MECS minister William Simmons in 1915. Six months later, the TBA bought the Tigert Memorial MECS building from Centenary MECS along with some land from Tate Brady to build Beno Hall. Beno Hall was an intimidating three-story structure constructed as a local KKK headquarters in intentionally close proximity to Greenwood. From Beno Hall vigilante raids were regularly conducted into North Tulsa.

In a letter of correspondence from Cooke to Mouzon, Cooke states about the KKK, “In their method of operation they may be wrong, in their hearts they are sincere. I know this to be true – some of your Bishops are members, all but two of the presiding elders in this state were, at least 75 percent of our preachers and dozens of our churches have their entire official board, or the large majority, within the organization.” He goes on to state, “I have not served on a committee in the Klan for more than a year…and have not been in a meeting in Tulsa for more than six months,” indicating that he was, indeed, an active member of the KKK at the time of the race massacre.

Why does all this matter? Why dredge up the past, particularly when it’s so dark and threatens to mar the reputations of prominent Methodist churches and leaders in Tulsa? In one word: reconciliation.

I mentioned above that I began this project as a service of reconciliation. A Mission Area Strategy Team (MAST) consisting of Tulsa churches St. Paul’s UMC, Boston Avenue UMC, Centenary UMC, Wesley UMC, Redemption Church, and Turley UMC began meeting together to focus on building bridges of reconciliation between traditionally white churches and traditionally African American churches in Tulsa with an eye toward the 100th anniversary of the Tulsa Race Massacre this year. Ever since then, I have been asking myself the question: “What does reconciliation look like?”

Archbishop Desmond Tutu stated that reconciliation cannot happen without truth-telling: “The debate was not on whether, but on how we might deal with this only too real past.”

If we are to reconcile white churches with black, African-American Tulsans with white, we must begin with truth-telling. We must begin owning our past. Not sweeping it under the rug or avoiding the subject, hoping it will go away.

Bishop James Nunn addressed this history in a pastoral letter dated May 27. He points out that the massacre was left out of most education curriculum and nearly forgotten for many years, making it both one of the worst and one of the least-known incidents of racial violence. The bishop called on those who follow Christ to not let ignorance be an excuse for doing nothing to address those violent acts now.

“Both downtown churches, Boston Avenue and First, were utilized as make-shift hospitals for the injured. At the same time, church leaders in many of the Methodist affiliated churches preached sermons blaming the victims of the massacre for inciting it,” Bishop Nunn says in his letter. “After Tigert Memorial Methodist Episcopal Church South moved to a new location, their former building was sold and the site became the corporate front for the Ku Klux Klan. It is important that we recognize our own explicit and implicit actions in perpetrating and responding to this horrific event.”

He continued, “As we observe the centennial of the Tulsa Race Massacre, United Methodists across the state of Oklahoma stand with the people of Tulsa as we look forward to a more inclusive future even as we look back at this moment in time. In the words of John Hope Franklin, ‘If the house is to be set in order, one cannot begin with the present; (one) must begin with the past.’”

The bishop is not the only one working toward reconciliation after the Tulsa Race Massacre. After small group studies and church-wide meetings, St. Paul’s UMC began collecting an offering on Second Sundays for reparations in the Tulsa community. The projects supported so far are the Vernon AME food program, Dream Center food program, Mt. Zion Baptist food support, Morton Health Services, Theatre North, the Tulsa Race Riot Commission “Tulsa Rising” Museum, the food bank, and the music departments of a Monroe Middle School and McClain High School.

“Our purpose of the Reparations offering is to: acknowledge history, love our neighbors, and make amends,” said retired elder Rev. Twila Gibbens, who attends St. Paul UMC and helps to lead its reconciliation efforts. “We include a letter with each offering to the recipient that states this purpose.”

Boston Avenue UMC describes its ongoing work toward reconciliation on its website. One way they are putting conviction to action is through a Justice and Reconciliation Initiative. Members of the initiative will engage in acts of discovery, acts of reconciliation, acts of justice, and acts of ascension, with specific topics or actions listed for every area of growth. 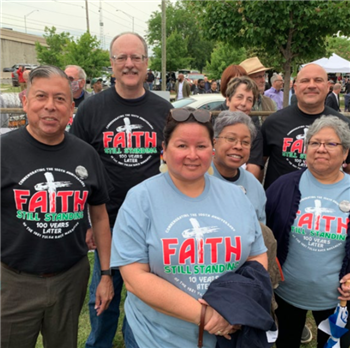 The initiative states it “aims to promote continuous growth toward becoming a more inclusive congregation by way of actionable objectives that evolve us, individually and collectively, toward discernment of what is meant by ambassadors for reconciliation in this body of Christ and, then, to practices which help us live out our core values.”

As followers of Christ and as the Oklahoma Conference, we must work to apologize, to make amends, to make this terrible history right. We must come, hat in hand, begging forgiveness of black citizens who continue to be marginalized, arrested, and shot in the street; of a community that continues to bear the scars of racial violence and division. Only then can we come back and offer our gift to God.

In the words of Bishop Nunn, “As we remember the 300 lives lost and a community decimated 100 years ago, let us commit today to ending the complicity of silence about this massacre and all acts of racism. Let us commit to bringing God’s healing to those who have been damaged by the wrongs of the past and present sin of racism. And, as Christ has commanded, let us love God with all our hearts, all our souls, and all our minds, and our neighbors as ourselves… all our neighbors.” §